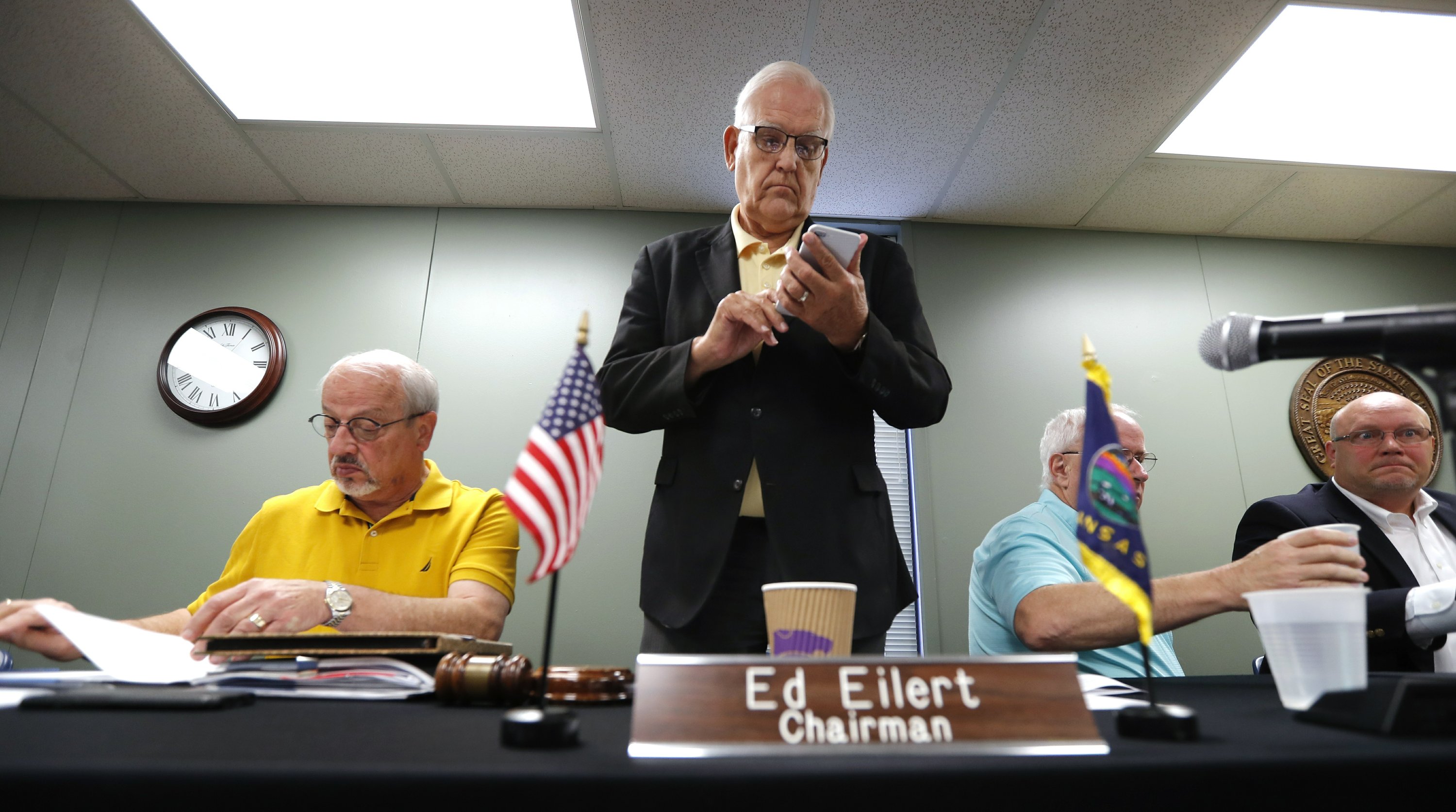 WICHITA, Kan. — Kansas Gov. Jeff Colyer conceded Tuesday evening in the state’s Republican gubernatorial primary, saying he will endorse Secretary of State Kris Kobach a week after their neck-and-neck finish threatened to send the race to a recount.

Colyer accepted defeat in a surprise announcement after a review of some provisional ballots from most Kansas counties failed to find enough votes for him to overcome a deficit of 110 votes at the time of poll closing in the Aug. 7 primary, out of more than 311,000 votes initially counted. Kobach, who was endorsed by President Donald Trump, has seen his lead widen as the counting of provisional ballots continues into next week across the state.

“I’ve just had a conversation with the secretary of state and congratulated him on his success and repeated my determination to keep this seat in Republican hands,” Colyer said. “This election may be the closest in America. But the numbers are not there.”

Kobach, 52, has a national conservative following thanks to his strong stance against illegal immigration and his fervent defense of voter ID laws. He was vice chairman of the Trump administration’s election-fraud commission, though the commission eventually found no evidence to support Trump’s claims of widespread voter fraud in the 2016 presidential election. Kobach’s voter fraud efforts also took a hit in June when a federal judge found the proof-of-citizenship voter registration law he championed was unconstitutional.

Colyer, by contrast, is far more low-key. The 58-year-old plastic surgeon from suburban Kansas City served as lieutenant governor for seven years and took over as governor in January when Sam Brownback resigned to become ambassador-at-large for international religious freedom.

Kobach has been a lightning rod for controversy, and some Democrats believe their party has a better chance to capture the governor’s seat with him as their Republican opponent instead of Colyer.

“Never in modern Kansas history has any major party’s nominee for governor been viewed as poorly by everyday Kansans than Kris Kobach,” said Ethan Corson, the executive director of the Kansas Democratic Party. “As the drawn-out Republican primary shows, even a significant number of Republican primary voters had and likely still have deep misgivings about the person now at the top of the GOP ticket.”

Kobach will face Democrat Laura Kelly, and is likely to face independent candidate Greg Orman, in the November general election in the decidedly conservative state. The bid from Orman, a Kansas City-area businessman who has launched what could become the most serious independent candidacy for governor since the 1930s, complicates Democrats’ efforts to recapture the governor’s office.

In a statement after Colyer’s announcement, Kelly said Kansas families already suffered enough under former Gov. Brownback and that the state doesn’t need someone like Kobach who has pledged to bring back the same policies.

“With Kris Kobach as Governor, Kansans get all the failed policies of Sam Brownback plus Kobach’s unique brand of hyper-partisanship and self-promotion,” Kelly said. “Quite simply, Kris Kobach is Sam Brownback on steroids, and that’s the last thing that Kansans need right now.”

Before becoming governor, Colyer was a loyal No. 2 to Brownback, even when budget problems that followed Brownback’s aggressive income tax cuts caused his approval levels to plummet. Lawmakers in 2017 rolled back most of those cuts.

The disputed race between Colyer and Kobach was intense and prompted a lengthy county-by-county review of provisional ballots. The aftermath of the primary included both candidates challenging each other’s legal interpretations, sending observers to monitor the vote count and raising the specter of lawsuits.

But in the end, Colyer and Lt. Gov. Tracey Mann said they were committed to supporting Republican nominee Kobach and helping him win in November.

“We will make sure the next governor is fully prepared and has our total cooperation in the peaceful transition of power,” Colyer told reporters in Topeka. He left without taking questions.

Kobach said in a statement that he received a call from Colyer before Colyer’s news conference where he conceded.

“He was incredibly gracious, and that meant a lot after such a hard-fought campaign,” Kobach said. “I want to thank Gov. Jeff Colyer for a race well run. He was a worthy opponent, and I thank him sincerely for his service to the state of Kansas. I will work hard to advance our shared values, and I look forward to working with Gov. Colyer and all Republicans to keep Kansas red in November.”

Colyer was trying to avoid becoming the first Kansas governor to lose a primary since 1956, and the first nationally since Hawaii’s Neil Abercrombie lost a Democratic primary in 2014.

Bob Beatty, a political scientist at Washburn University in Topeka, said there was still a small chance that a recount could have revealed something to change Colyer’s chances, but the odds were very much against him. By conceding, Colyer has made it possible for him to run for another office in the future, Beatty said.

Both Kelly and Orman want to face Kobach in the fall, Beatty said, noting several polls showing Kobach weaker in the field than Colyer.