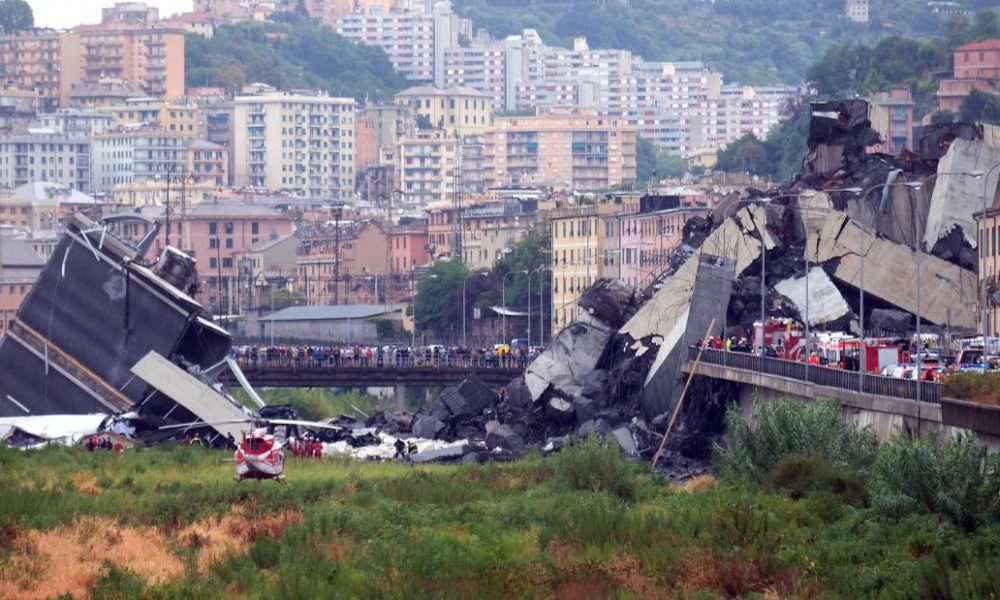 GENOA, Italy — The Latest developments following the deadly collapse of a highway bridge in Italy (all times local):

Italy’s transport minister, Danilo Toninelli, says the leaders of the private company that manages many of Italy’s highways — including the section of a bridge that collapsed in Genoa — should resign.

Toninelli said in a Facebook post that due to “serious faults” his ministry had activated procedures to revoke Autostrade Per L’Italia’s concession to run highways and to impose fines of up to 150 million euros ($170 million).

The holding company that controls Autostrade SRL has taken a hit on the stock market. Atlantia closed down 5.4 percent on Tuesday, burning 1.1 billion euros in capital. Markets were closed for an Italian bank holiday Wednesday.

Autostrade has said it would work with Italian authorities to determine what caused the highway bridge to collapse, killing 39 people, and to find a safe, speedy solution to rebuilding the key bridge.

A witness to the deadly Genoa highway bridge collapse has provided a dramatic account of the disaster to Italian television SKY TG24, including a description of how a green truck stopped just short of the abyss.

A driver identified only as Idris said the truck was saved because another vehicle passed it at the last second, forcing the truck to brake slightly. Just then, Idris said, the passing car “went down.”

Idris said the driver of the green truck braked right where the bridge collapsed. He says the driver “went back three meters (yards) then left the motor running and ran. I was behind him, two cars back. I backed up a little, leaving space for other cars. When I saw the thing was so big, that everything had fallen, I took the keys and got out of there.”

Italy’s deputy premier, Luigi Di Maio, is blaming the collapse of a major highway bridge in Genoa on a lack of maintenance by the private company that operates many of the nation’s toll highways.

Speaking in Genoa, Di Maio said Wednesday that he was looking at revoking highway concessions.

He said of the holding company that controls Autostrade Per Italia: “instead of investing money for maintenance, they divide the profits and that is why the bridge falls.”

Di Maio, who leads the anti-business 5-Star Movement party that is part of Italy’s coalition government, took a swipe at the Benetton group, which controls Autostrade SRL through its Atlantia holding company. He blamed previous Italian governments of turning a blind eye to the health of the nation’s toll highways because of political contributions.

— This entry corrects the spelling of the Benetton group.

Genoa prosecutor Francesco Cozzi says the investigation into the fatal bridge collapse is focusing on maintenance and the design of the 51-year-old bridge.

Cozzi told reporters Wednesday that he didn’t know if anyone bore legal responsibility for the collapse that killed at least 39 people but he said “for sure it was not an accident.”

Cozzi said there were no pending complaints involving the bridge in recent years, and that they were also checking archives.

But he noted if there had been serious concerns about the safety of the bridge in the prosecutor’s office “none of us would have driven over that highway 20 times a month as we do.”

Still, the head of Italy’s transport department has said that a $22.7 million safety upgrade for the bridge had been planned.

Three French citizens are among dozens of dead in a highway bridge collapse in Italy at the height of holiday travel season.

The French Foreign Ministry says Wednesday that the victims include three French citizens and expressed condolences to their families. It did not release their identities. Local media reported they were two young women and a man from Toulouse who had traveled to Italy for a music festival.

The statement says the French government is in touch with Italian authorities to determine if there are other French victims.

Italian authorities say at least 39 were killed in Tuesday’s disaster on a highway in Genoa that connects Italy to France. It happened as many families were on the road ahead of a major summer holiday Wednesday in parts of Europe.

Pope Francis has led prayers for the victims of the Genoa highway bridge collapse.

Authorities said at least 39 were killed in the bridge’s collapse on Tuesday in the northwestern Italian port city.

Francis said: “I am especially thinking of all those tried by the tragedy in Genoa yesterday, which caused victims and a sense of loss in the population.”

He expressed his “spiritual closeness” to the victims, the injured and their families and the hundreds of people who were forced to flee homes in the area.

He then led thousands of people in the square in a special prayer for the victims and their loved ones.

Italian authorities have raised the number of confirmed deaths to 39 in the Genoa highway bridge collapse.

Angelo Borrelli, the head of the civil protection department, announced the latest death toll at a news conference in Genoa on Wednesday.

Borrelli said some 1,000 rescuers have been working since after the collapse Tuesday to search for “any possible missing” persons.

He added that 15 people were injured when a 80-meter (260-foot) stretch of highway broke off, sending vehicles plunging from the bridge.

Albanian authorities say that two Albanian men were killed in the collapse of the highway bridge in Genoa.

The Albanian Embassy in Rome identified the victims as two young Albanian men named Marjus Djerri and Edi Bokrina on its Facebook page Wednesday, expressing condolences and offering assistance to their families.

Hundreds of thousands of Albanians have moved to Italy seeking better lives following the collapse of the communist regime in the tiny western Balkan country.

Italian authorities have raised the death toll in the Genoa highway bridge collapse to at least 37.

The Italian city’s prefect office announced the updated figure on Wednesday even as rescuers searched through tons of slabs of broken roadbed, smashed concrete chunks and twisted steel for any more survivors.

At least two people were missing.

The Morandi Bridge collapsed without warning Tuesday, sending dozens of vehicles plunging as much as 50 meters (180 feet) below. Sixteen people were injured. State radio said among them was a woman who suffered smoke inhalation from a fire sparked by debris falling into her home and a Czech truck driver who suffered a chest injury.

Many in the city had said the 1967 bridge needed shoring up.

Rescue and recovery efforts continued through the night into the morning in Italy following the collapse of a highway bridge in Genoa, while authorities raised the death toll to 35 with three missing.

Rescuers searched through tons of concrete slabs and steel for survivors or bodies from the collapse a day earlier on the eve of Wednesday’s summer Ferragosto holiday.

State radio Wednesday quoted the prefect’s office confirming a death toll of 35 and denying some news reports that put it at 38.

About a dozen people remained hospitalized in serious condition.

What caused an 80-meter (260-foot) long stretch of highway to break off from the 45-meter (150 foot) high Morandi Bridge in the northwestern port city is under investigation. There had been proposals to upgrade the 1967 bridge.