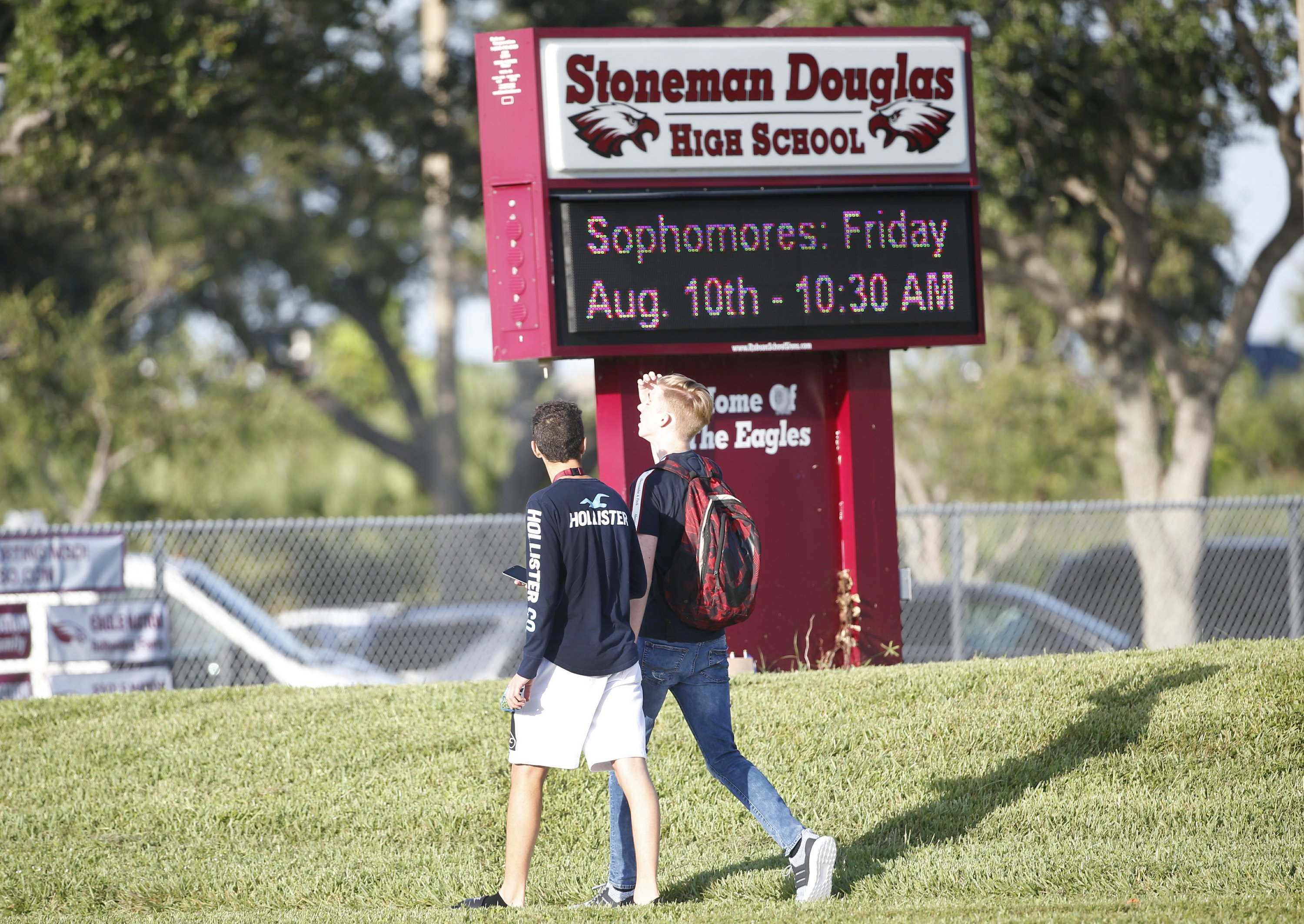 All the students wore lanyards with IDs around their necks as they walked past a heavy police presence. Volunteers greeted them with German shepherds, and a helicopter hovered overhead as a throng of media watched from across the street.

Samantha Deitsch, 15, said she’s grateful for the changes, but “there’s literally no place that I am every day that I feel 100 percent safe and the thought doesn’t go through my head that someone could come in with a gun.”

Anijah Avera, 16, said she mostly doesn’t think about the shooting except for “a little bit this morning… we have better security now so I feel a little more at ease.”

Three school resource officers, three security specialists and a dozen campus monitors will be on patrol. They’ll be keeping watch at new fences and gates at the beginning and end of the school day, to ensure that only staff and students wearing ID badges are allowed to enter.

Visitors will have only one way in, and they’ll be screened through a video intercom system. The district had planned to add metal detectors but reversed course amid concerns over privacy and the impracticality of trying to clear thousands of students before each day’s morning bell.

All classroom doors have new hardware that automatically locks when doors are pulled shut. Witnesses said teacher Scott Beigel and student Joaquin Oliver were fatally shot as they ushered students inside to safety, in part because the old hardware required relocking from the outside.

Many reminders have been removed from the campus, such as posters and memorials. But the freshman building still stands as a solemn reminder of the bloodshed, surrounded by a permanent new fence as prosecutors continue to use the crime scene for their legal case. The classes it once held have been diverted to nearly three dozen new portable classrooms.

Aria Siccone, 15, was there during the Valentine’s Day rampage. She watched one of her classmates pounding on the classroom door, trying to flee the shooter, and remains haunted by his terror-stricken face moments before he was gunned down. The gunshots started shortly after he knocked, and they couldn’t let him in. When a SWAT team later led her out of the building, she saw bodies in the hallway.

“I am happy to be able to see all of my friends, but I have been very anxious about returning to school,” she said. “I’m scared of being at any school, not only Douglas, because I feel unsafe no matter how much security we have.”

Deitsch, who spent her summer meeting with state lawmakers to advocate for gun safety, texted with her friends Tuesday night about first-day jitters and what their teachers would be like. She got a new backpack. She’s grateful she’ll be sharing a lunch period with some of them. But her friend Jamie Guttenberg, who was killed, won’t be with them.

School Superintendent Robert Runcie said the school now has two wellness centers, along with a team of counselors, social workers and therapy dogs brought back at the students’ request. “It feels like it happened yesterday, so there’s a lot of emotion going on. It’s still a challenging time for students and faculty.”

Marcos Aguirre, 16, said he tries not to think about that day, and is trying to move forward.

The case against shooting suspect Nikolas Cruz continues in court, where the Broward County school board wants a judge to hold the South Florida Sun Sentinel in contempt, and other issues involving evidence and a trial date could come up at a Wednesday hearing.

The board claims the newspaper violated court orders by publishing details about Cruz’s educational background that were supposed to be redacted to protect his privacy. The newspaper contends the board had already exposed those details by mistakenly releasing them in a way anyone could see.