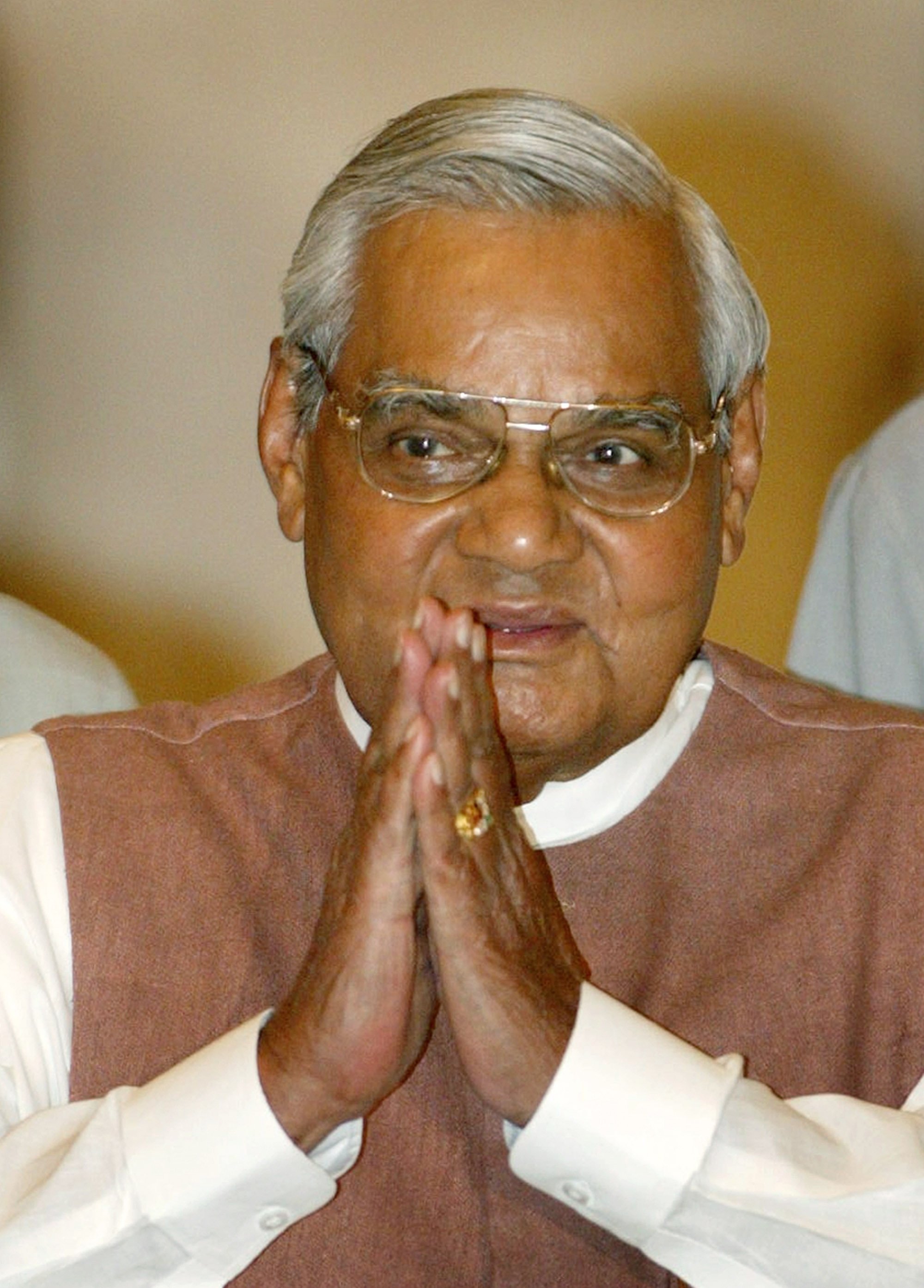 NEW DELHI — Former Indian Prime Minister Atal Bihari Vajpayee, a Hindu nationalist who set off a nuclear arms race with rival Pakistan but later reached across the border to begin a groundbreaking peace process, died on Thursday after a prolonged illness. He was 93.

The All India Institute of Medical Sciences, where Vajpayee had been hospitalized for more than two months for treatment of a kidney infection and chest congestion, announced his death.

Vajpayee, a leader of the Hindu nationalist Bharatiya Janata Party, had suffered a stroke in 2009.

A onetime journalist, Vajpayee was in many ways a political contradiction: He was the moderate leader of an often-strident Hindu nationalist movement. He was a lifelong poet who revered nature but who oversaw India’s growth into a swaggering regional economic power. He was the prime minister who ordered nuclear tests in 1998, stoking fears of atomic war between India and Pakistan. Then, a few years later, it was Vajpayee who made the first moves toward peace.

Vajpayee’s supporters saw him as a skilled politician who managed to avoid fanaticism, a man who refused to see the world in black and white.

But his critics considered him the leader of a fanatic movement — a movement partially rooted in European fascism — that sought power by stoking public fears of India’s large Muslim minority.

The one thing both sides could agree on was his honesty. Vajpayee was that rare thing in Indian politics: a man untainted by corruption scandals.

One of seven children of a schoolteacher in central India, Vajpayee joined India’s Hindu revivalist political movement in his late 20s. Elected to Parliament in 1957, he became the best-known figure in its moderate wing, and helped the Bharatiya Janata Party become one of India’s few national political parties.

One of India’s longest-serving lawmakers, Vajpayee was elected nine times to the powerful Lok Sabha, or lower house of Parliament. He also served two terms in the Rajya Sabha, or upper house.

He led the party to its first national electoral victory in 1996, but lasted just 13 days as prime minister before he resigned in the face of a no-confidence motion. He returned to power in 1998 for 13 months after forging an alliance of 22 parties, mostly regional power brokers with disparate local appeal. He again served as India’s prime minister from 1999 to 2004.

It was in India’s relations with Pakistan where Vajpayee’s influence may last the longest.

While India’s nuclear weapons program is believed to date to the 1980s, New Delhi had long insisted its atomic program was purely for peaceful purposes. That changed within a month of Vajpayee returning to the prime minister’s post in 1998, when he approved a series of nuclear weapons tests that shocked the world and pushed Islamabad to launch its own tests.

But the next year, when Islamabad sent fighters across the cease-fire line that divides the disputed Himalayan region of Kashmir between the nations, Vajpayee resisted military pressure to launch a broad counter-attack of Indian forces.

After 11 weeks and more than 1,000 deaths, Pakistan ordered the fighters to withdraw. India earned international praise for its caution.

His peace efforts began with a groundbreaking bus ride to Lahore, Pakistan, in February 1999, where he met with then-Prime Minister Nawaz Sharif. The diplomatic journey inaugurated the first regular bus service between the two nations.

Then, just before leaving office in 2004, he launched a peace process that, while often rocky, remains the basis of ongoing negotiations.

Vajpayee avoided bedrock nationalist issues, like plans to build a Hindu temple at the site of a demolished north Indian mosque. But critics excoriated him for failing to quickly quell anti-Muslim riots that shook the state of Gujarat in 2002. More than 1,100 people, almost all of them Muslim, were killed in the riots, which began after a train fire killed 60 Hindu pilgrims. Muslims were accused of setting the fire, though the true cause was never known.

Vajpayee’s public response to the riots reflected his many contradictions.

In the days after the pogrom, Vajpayee said he could not understand how Hindus could burn women and children alive, sadly asking a group of Muslim survivors: “Have we lost our way so much that we cease to be humans?”

Just a year later, though, he told a mostly Hindu audience, “Wherever there are Muslims in large numbers, they do not want to live in peace.”

While known for his poetry and gifted with a politician’s common touch — as a parliamentarian he would take his dogs for walks in public — he was not known for public introspection. Few people could claim to understand what drove him. He never married, but lived with his adopted daughter, her husband and their daughter.

Vajpayee quickly dropped from sight after the BJP lost power to the long-dominant Congress party in 2004 elections. As his health failed, Vajpayee stayed out of the limelight even when the BJP returned to power a decade later and Narendra Modi became prime minister.

Modi’s government presented Vajpayee as an icon, seeking inspiration from his political career and cashing in on his stature and popularity as a statesman acceptable across political divides.

“It was Vajpayee’s exemplary leadership that set the foundations for a strong, prosperous and inclusive India in the 21st century. His futuristic policies across various sectors touched the lives of each and every citizen of India,” Modi tweeted Thursday.

Rahul Gandhi, the leader of the Congress party, said “India has lost a great son” who was “loved and respected by millions.”

In 2015, the government honored Vajpayee with the Bharat Ratna, India’s highest civilian award, while his Dec. 25 birthday was declared “Good Governance Day” in a tribute to his leadership.

Vajpayee’s body it to be taken to his New Delhi home and then to the BJP’s office on Friday for people to pay their last respects. His funeral is to be held Friday afternoon.

This story has been corrected to show that Vajpayee’s second tenure as prime minister was for 13 months instead of 11 months.