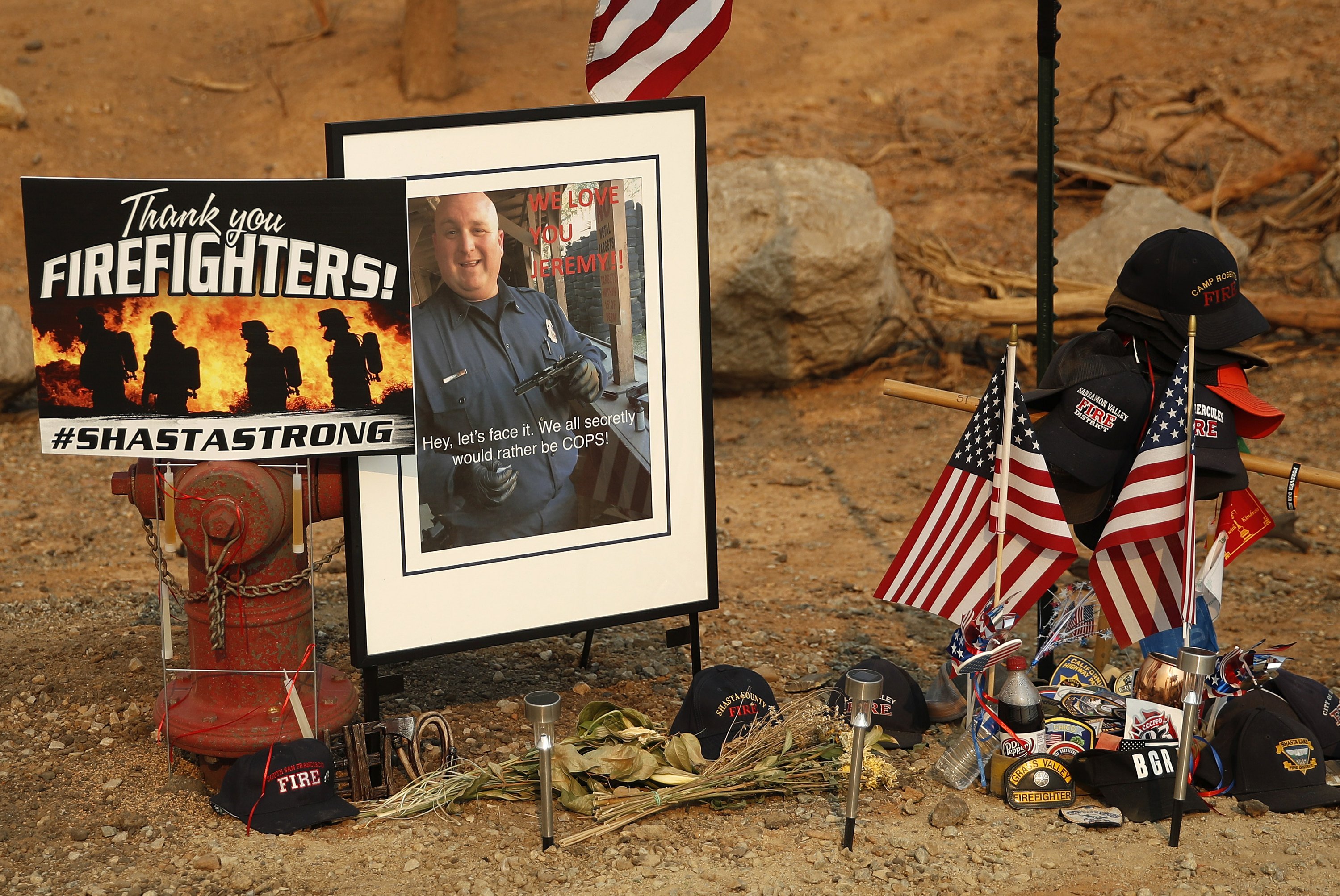 SAN FRANCISCO — In the history of California wildfires there has never been anything like it: A churning tornado filled with fire, the size of three football fields.

An official report describes in chilling detail the intensity of the rare fire phenomenon and how quickly it took the life of Redding firefighter Jeremy Stoke, who was enveloped in seconds as he tried to evacuate residents on July 26.

Three videos released with the report late Wednesday show the massive funnel of smoke and flames in a populated area on the edge of Redding, about 250 miles (400 kilometers) north of San Francisco.

The smoke-and-fire tornado was about 1,000 feet (300 meters) wide at its base and shot approximately 7.5 miles (12 kilometers) into the sky; it reached speeds of up to 165 mph (265 kph), with temperatures that likely exceeded 2,700 degrees Fahrenheit (1,480 degrees Celsius), said the report by the California Department of Forestry and Fire Protection.

The tornado exploded in the middle of what was already a gigantic, devastating wildfire that started on July 23 with a spark from a vehicle driving on a flat tire. Stoke is one of eight people killed since the blaze started and destroyed nearly 1,100 homes. It was 71 percent contained as of Thursday.

A 17-year veteran of the fire department, Stoke was familiar with the dangers of wildfires. But this was unprecedented.

The 37-year-old fire inspector was driving his pickup truck down a Redding road, working on evacuating people from the larger blaze, when he radioed out a “mayday” call, according to the report.

Stoke said he “needed a water drop and was getting burned over,” the report said.

An engine captain who heard the call asked for Stoke’s location. There was no response.

Fire dispatchers tried to locate him by ‘pinging’ his cellphone.

Stoke’s remains were not found until the next day, and it took more time to analyze the ferocity of the tornado that ripped roofs off houses and flung power line towers, cars and a shipping container into the air near the spot where Stoke was overtaken by the flames, according to the report.

A confluence of weather conditions likely contributed to the tornado, including a combination of record heat in the Sacramento Valley — it reached 113 degrees Fahrenheit (45 degrees Celsius) in Redding that day — and cool high-speed winds coming from the coast, the report said.

“It was something out of this world, a perfect storm,” Gary Parmely, who was Stoke’s stepfather and raised him from the time he was a child, told the AP in a telephone interview Thursday. “It was incompatible with life, and he happened to drive into it.”

Parmely said he has driven out several times to the site where Stoke died. American flags, flowers and a framed picture of Stoke have been left in memoriam.

“The loss of Jeremy broke the heart of this community, not just his family,” Parmely said. Stoke leaves behind a wife and two children. Stoke was on vacation with his best friend in Idaho but cut the trip short, Parmely said.

“He came back early to help fight this fire.”

The report also detailed the death of private bulldozer operator Don Smith, 81, of Pollock Pines, who was killed when his bulldozer was caught in the flames while trying to improve a fire line, defending a home, during what the officials say were “extraordinary fire weather conditions.”

Both deaths occurred within an hour and 50 minutes in one 3-mile (5-kilometer) stretch of the Carr Fire, which is one of several massive wildfires in California this year.

The Carr Fire jumped the fire line and a Cal Fire crew chief said he made several radio attempts to tell Smith to “get out of there.” Two firefighters in the area also “recognized the urgency of the situation” and tried to reach Smith on foot, but had to turn back because of the encroaching flames.

Smith reported that he was cut off by the fire and was pushing on in his 2002 John Deere open cab bulldozer in an attempt to reach a safe area. He also requested water drops and four helicopters began dropping water through the smoke and flames around Smith’s last known location.

Once the smoke cleared, a pilot saw that Smith’s dozer had been engulfed in flames and there was no sign of the protective metallic tent that firefighters deploy as a desperate measure when they are about to be overrun by fire. After two attempts, a fire captain was able to reach the bulldozer two hours later and confirmed that Smith was dead.