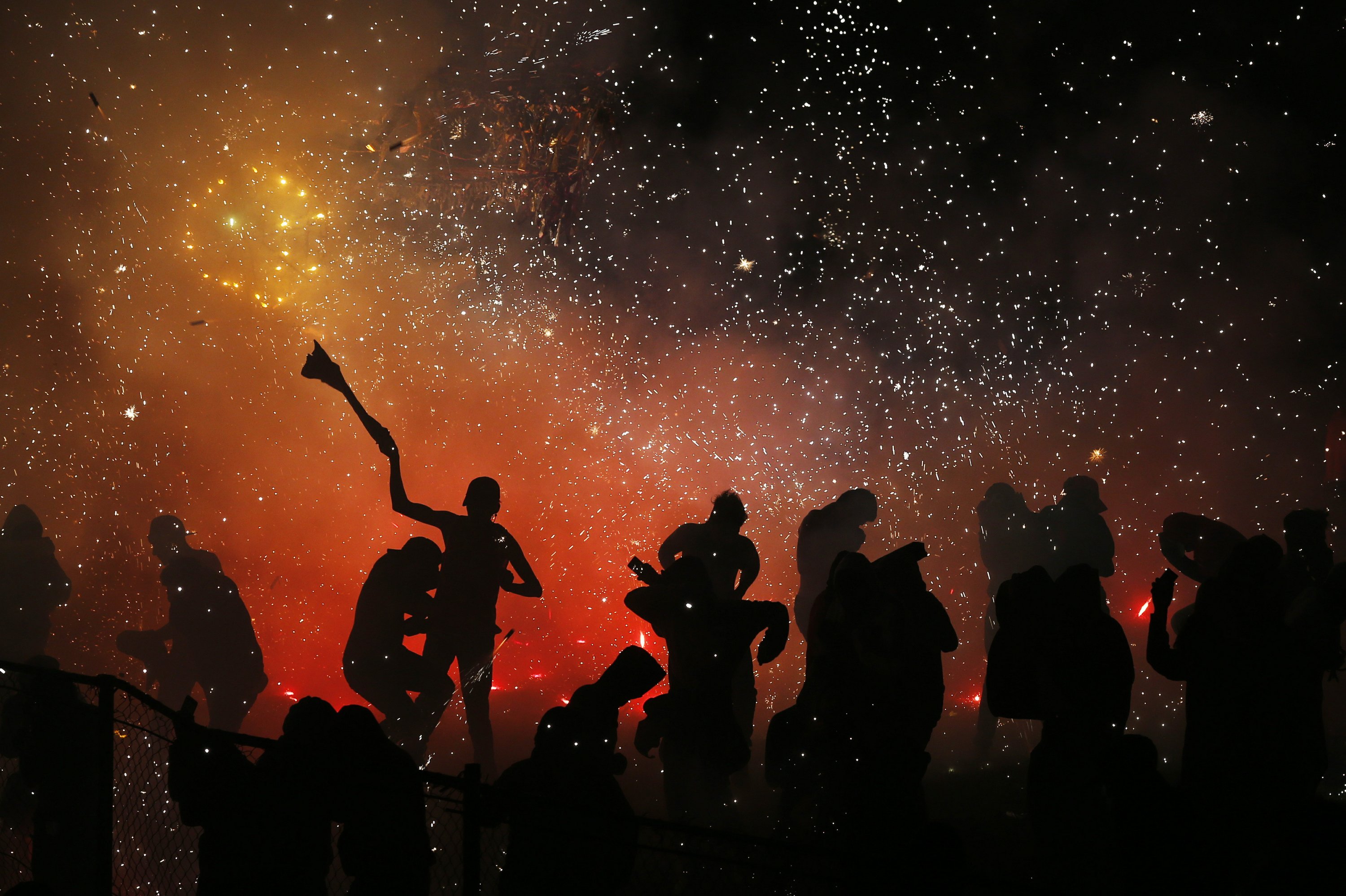 TULTEPEC, Mexico — Luis Enrique Urban Gomez was tidying up at his family’s fireworks storage shed like any other day when an explosion ripped through the warehouse next door, killing its owner, leaving Urban with second- and third-degree burns and wounding seven others.

Nearly two months later, lying on a bed in his parents’ home with bandages covering his torso and angry red scars on nearly his entire body, the 20-year-old was in good spirits and itching to be back in business making fireworks just as soon as his wounds are fully healed.

“In spite of it all, it is a pleasure,” Urban said. “It is a job with tradition … something we decided to do when we were young.”

Urban’s hometown of Tultepec, about an hour’s drive north of downtown Mexico City, is famous as the fireworks production capital of the country, a place where there’s always a sulfurous whiff to the air, “no smoking” signs are ubiquitous and untold thousands of multi-generation families make a living hand-crafting the explosives. 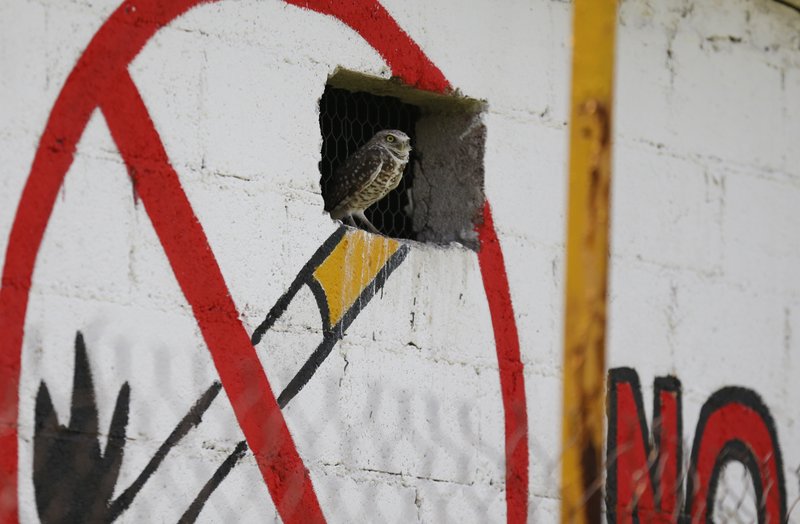 In this Aug. 1, 2018 photo, an owl stands in a ventilation opening at one of the many fireworks workshops in Tultepec, Mexico. Tultepec. (AP Photo/Marco Ugarte)

It’s also infamous for deadly explosions that happen with such regularity Mexicans long ago ceased to be surprised at news reports of clandestine workshops erupting and instead muse on social media about why people continue to ply such a dangerous trade in this city of 130,000-plus inhabitants. But Tultepequenses, as locals are known, are proud of their craft and see it as a part of their identity, a tradition they’ll never give up.

“When people talk about fireworks in Mexico they talk about Tultepec, and that’s something that fills you with pride and makes you keep working,” Urban said.

“We want to continue to excel at it,” he added, “try to improve it, look for ways to make this job safer.”

The June 25 explosion that also left his cousin with a punctured lung and missing a leg was one of at least three in the city in just over a month. On June 6, a blast killed eight and injured seven at a home, and on July 5, a series of warehouse explosions killed 25 and hurt at least 49.

In perhaps the most notorious incident, the open-air San Pablito fireworks market went up in a chain reaction of flames and exploding rockets in late 2016, killing at least 42 including holiday shoppers a few days before Christmas. 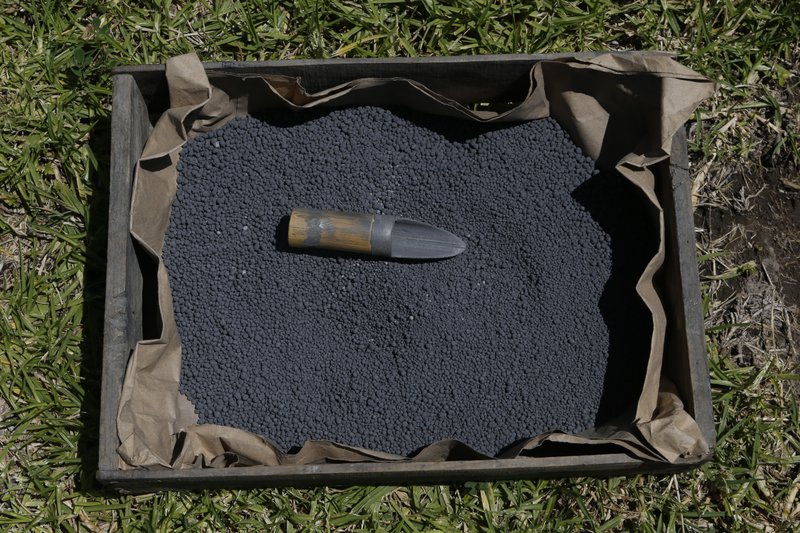 In this Aug. 1, 2018 photo, a box full of gunpowder is set out to dry under the sun at the Luna family workshop in Tultepec, Mexico. (AP Photo/Marco Ugarte)

Last year there were 40 fireworks accidents in the State of Mexico, where Tultepec is located, that claimed 24 lives and injured more than 100, according to the governmental Mexican Institute of Pyrotechnics; through July 5 of this year, there have been 16 accidents with 40 dead and more than 70 hurt.

The flip side of those sad statistics is that it’s big business that keeps thousands of families afloat. According to the pyrotechnics institute, the industry generates about $65 million nationwide each year around Sept. 16 Independence Day celebrations alone, and fireworks are a mainstay of civic and religious festivals year-round.

On a recent day, Lazaro Luna grabbed paper tubes with his blackened fingers and filled them with a powder made of coal, aluminum and other chemical compounds. The tubes are later dipped in wax and fixed to metal structures to create what are known as “castles,” pyrotechnic displays that can take any shape from the figure of a saint to whatever the imagination decides.

“It is an art of doing things, of knowing how to mix the products with the certainty that they are fine, to create a figure,” Luna said. “When the public applauds you for the work they have just seen, that is good, you feel proud.”

Luna said he got his start in fireworks at age 12 when he would come home from school every day to help his father, who taught him the craft. Sixty-one years later, he has passed the trade down to three sons.

“This is a job like any other: honest. We do not steal, it is a very noble profession, so don’t see us as people who are murderers or who go around wanting to cause accidents just because,” said Noe Luna Hernandez, one of the sons. “Pyrotechnics is light, party, colors, fun.” 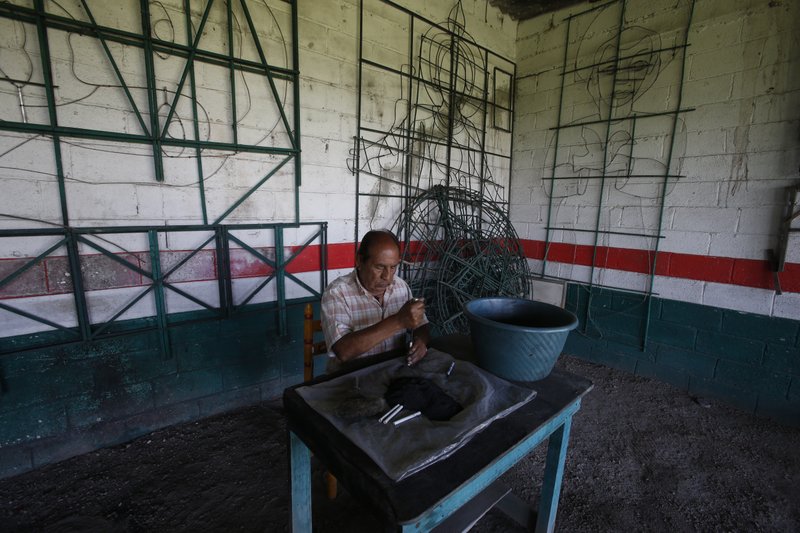 In this Aug. 1, 2018 photo, Lazaro Luna makes fireworks at his family workshop in Tultepec, Mexico. Lazaro Luna fills them with a powder made of coal, aluminum and other chemical compounds.(AP Photo/Marco Ugarte)

Luna’s licensed workshop has three separate areas for raw materials, for manufacturing and for storing the finished product. Each is separated by a distance of about 30 feet (10 meters) for safety, and there are fire extinguishers, a pool of water and a sandbox to help in any emergency.

According to the pyrotechnics institute, about 40,000 families in Mexico State make a living directly from fireworks. In Tultepec, an estimated 65 percent of residents are involved in the trade.

Authorities conduct spot inspections of licensed fireworks businesses. But it’s impossible to do the same for the countless home workshops that operate off the books, and those can be the most dangerous operations.

After more than 13 years as a Tultepec firefighter, Jose Luis Juarez said he can’t recall how many fireworks accidents he’s seen. But he estimated that about three-quarters happened in clandestine workshops and said the cause is usually inexperience or mishandling of the pyrotechnic material. Many emergency calls are for people who have had hands or arms blown off, or with severe wounds to the chest and face.

Juarez has a burn scar on his right hand from when he and others responded to the July 5 explosion. After they arrived at the scene, a second deafening blast knocked them all to the ground. Instinctively he went to help his colleagues, but two had been blown apart and ultimately were part of the death toll. 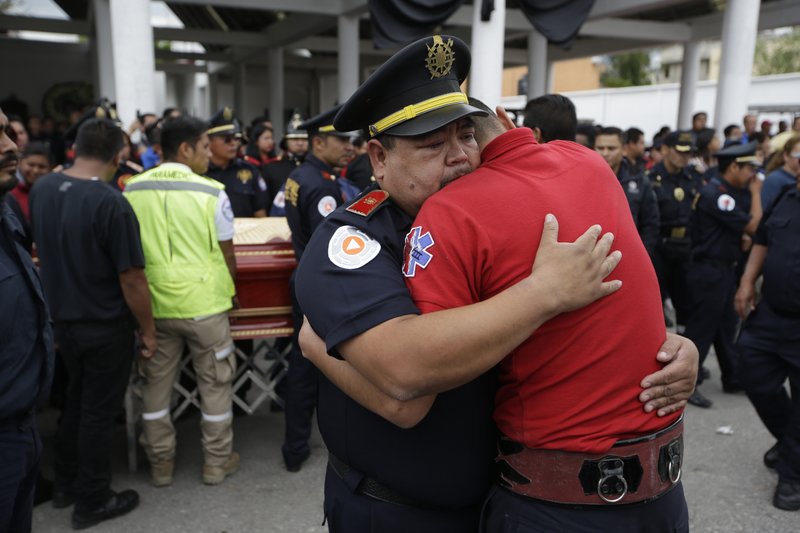 FILE – In this July 6, 2018 file photo, a firefighter comforts another during a memorial for firefighters who died in the explosion of several fireworks workshops in Tultepec, Mexico. (AP Photo/Moises Castillo)

“It hurts to remember that, because you feel helpless for having been unable to help your co-workers,” he said.

Juarez said he respects the town’s traditions and understands that many resort to the clandestine fireworks trade because they can’t afford a license. To avoid more accidents, he said it’s important for new fireworks artisans to learn from those who have been doing it for many years and for authorities to help wildcat operations come into the open and be regulated.

After an explosion locals often circle the wagons and physically bar journalists and others from the scene, fearing bad publicity.

Local pride in Tultepec’s pyro-culture is evident in a youth project to organize art exhibits and concerts celebrating fireworks and even producing illustrated manuals on how to set them off safely.

It’s also on display at frequent celebrations complete with burnings of explosive “toritos,” which take their name from their bull-shaped frames mounted on wheels, covered in paper and painted with colorful designs.

One recent evening in the Tultepec neighborhood of Santiago Teyahualco, kids and adults mingled among vendors hawking bags of potato chips and pulque, a milky, viscous alcoholic drink made from the maguey plant. The party was in honor of the Roman Catholic saint Santiago Apostol. 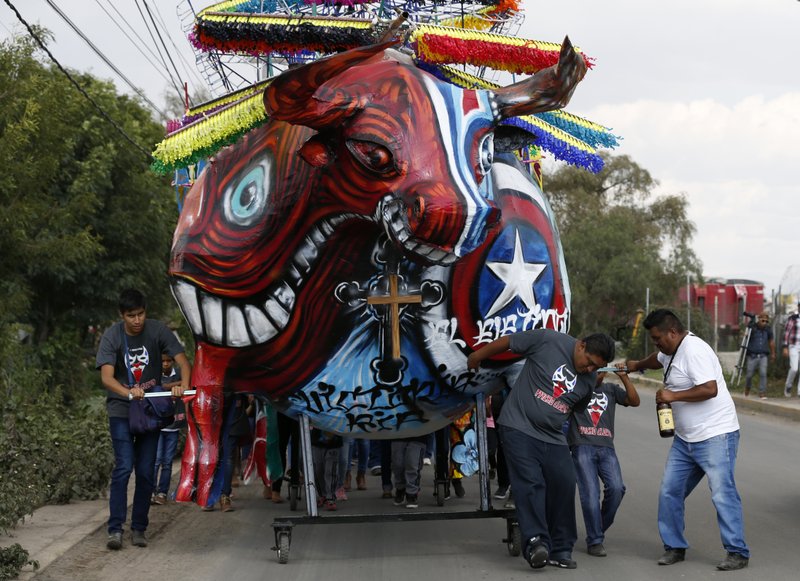 In this July 30, 2018 photo, revelers move a huge papier-mache bull, stuffed full of fireworks, through the streets of the Santiago Teyahualco neighborhood of Tultepec, Mexico. (AP Photo/Marco Ugarte)

To cries of “Fire! Fire!” the “toritos” erupted in sparks that rained down on many in the crowd, but nobody seemed to be fazed despite past incidents. In March, the newspaper El Universal reported that 549 people were injured at another burning in Tultepec, mostly minor burns and bruises.

Spectator Karen Arellano was enjoying the show with the protection of a shield improvised from a cardboard box.

“Fear? Yes, it scares me, and that is inevitable,” Arellano said. “I think it frightens all of us here, but the adrenaline one feels seeing the show and how the people get is marvelous.”