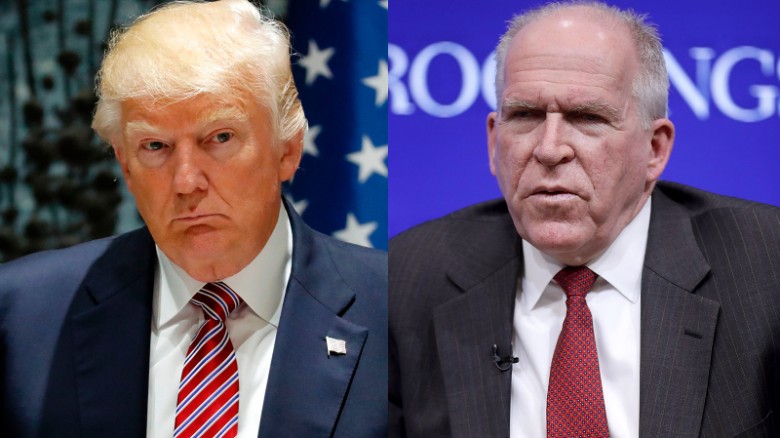 A group of 12 bipartisan former intelligence officials has sent an open letter to President Donald Trump on Thursday condemning his decision to revoke the security clearance of John Brennan, the former CIA director under President Obama and current national security contributor for MSNBC.

The letter in part reads, “All of us believe it is critical to protect classified information from unauthorized disclosure. But we believe equally strongly that former government officials have the right to express their unclassified views on what they see as critical national security issues without fear of being punished for doing so … Our signatures below do not necessarily mean that we concur with the opinions expressed by former Director Brennan or the way in which he expressed them. What they do represent, however, is our firm belief that the country will be weakened if there is a political litmus test applied before seasoned experts are allowed to share their views.”

A day after that letter was made public, a group of 60 lower-ranking former CIA agents signed a second letter also in opposition to Mr. Trump’s decision.

But the former officials have it all wrong: this wasn’t just a “political” move. It might be breaking precedent, but there is no good reason to keep following a broken standard. After Brennan left his post as CIA director, he joined a news organization and is being paid as a national security commentator. There is a clear threat that he will use his security clearance to obtain and make public classified information that the president does not want to get out.

To be clear, Brennan is no fan of President Trump’s in the slightest bit. Turn to Brennan’s twitter account for more than one example of his anti-Trump rhetoric.

But that is not necessarily the reason why President Trump revoked Brennan’s security clearance. It’s in part because Brennan was monetizing his security access.

“Mr. Brennan’s lying and recent conduct characterized by increasingly frenzied commentary is wholly inconsistent with access to the nation’s most closely held secrets and facilities, the very aim of our adversaries, which is to sow division and chaos,” Trump said in the statement.

“Such access is particularly inappropriate when former officials have transitioned into highly partisan positions and seek to use real or perceived access to sensitive information to validate their political attacks.”

It looks like MSNBC will have to continue paying Brennan, this time for his past experience and not his current security access capabilities.