Science Says: ‘The warmer it is, the more fire we see’ 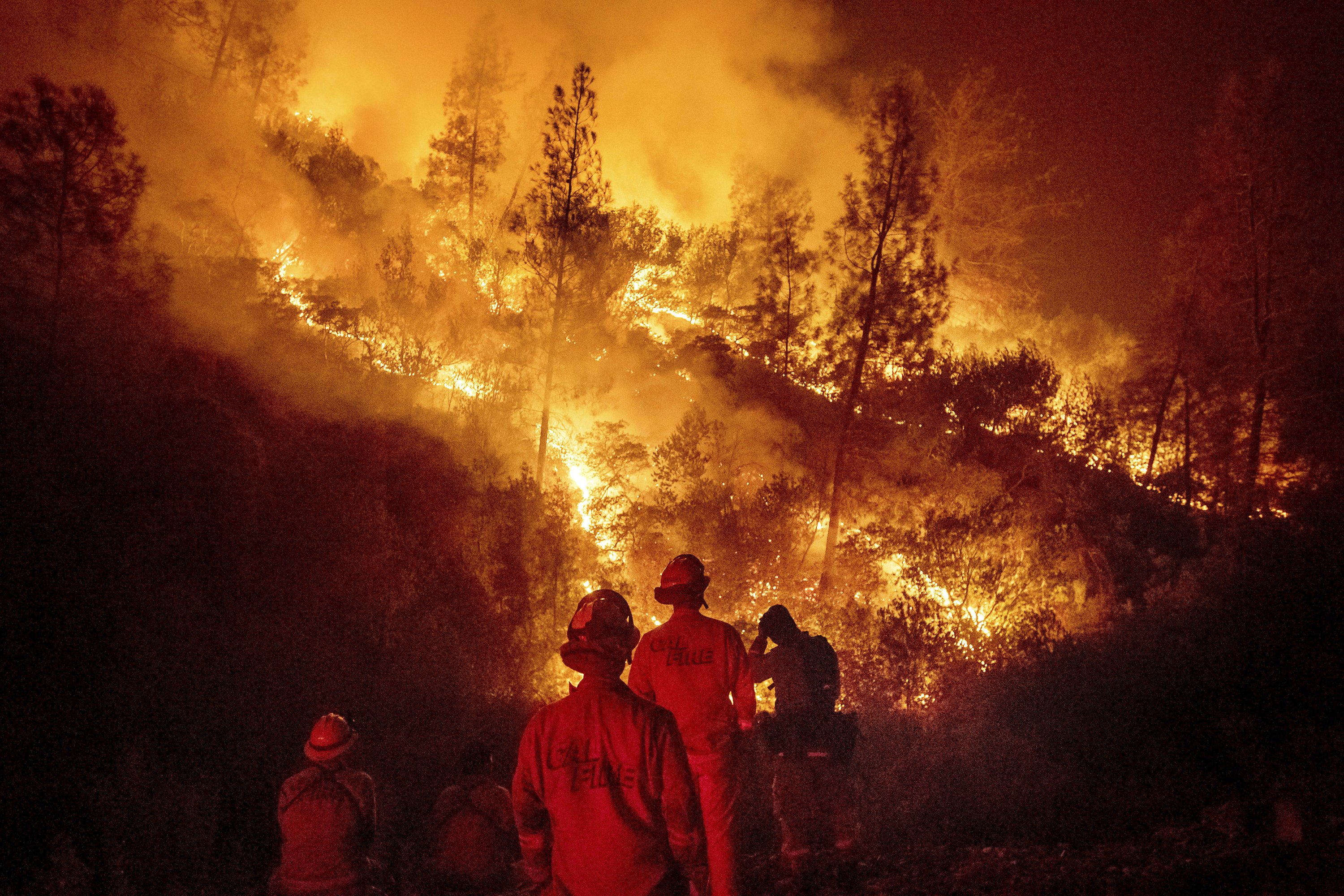 As temperatures rise in the U.S. West, so do the flames.

The years with the most acres burned by wildfires have some of the hottest temperatures, an Associated Press analysis of fire and weather data found. As human-caused climate change has warmed the world over the past 35 years, the land consumed by flames has more than doubled.

Experts say the way global warming worsens wildfires comes down to the basic dynamics of fire. Fires need ignition, oxygen and fuel. And what’s really changed is fuel — the trees, brush and other plants that go up in flames.

The western summer so far is more than 3 degrees Fahrenheit (1.7 degrees Celsius) warmer than the 20th century average. California in July logged its hottest month in 124 years of record-keeping. 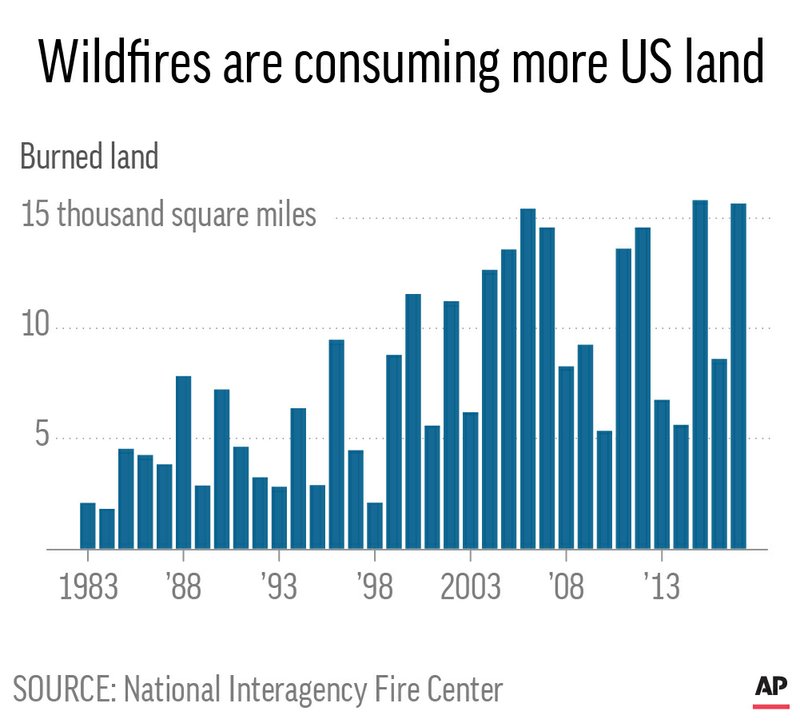 A degree or two may seem like not much, but for fuel it is crucial. The hotter it is, the more water evaporates from plants. When fuel dries faster, fires spread more and burn more intensely, experts said.

For every 1.8 degrees Fahrenheit that the air warms, it needs 15 percent more rain to make up for the drying of the fuel, Flannigan said.

And low humidity is “the key driver of wildfire spread,” according to University of Colorado fire scientist Jennifer Balch who says the western U.S. soon will start to see wildfires of 1 million acres (1,562 square miles).

“You kind of keep saying ‘How can they get much worse?’ But they do,” Sugaski said.

The number of U.S. wildfires hasn’t changed much over the last few decades, but the area consumed has soared.

“The year 2000 seemed to be some kind of turning point,” said Randy Eardley, the fire center’s chief spokesman.

Some people who reject mainstream climate science point to statistics that seem to show far more acres burned in the 1930s and 1940s. But the fire center’s Eardley said statistics before 1983 are not reliable because fires “may be double counted, tripled counted or more.”

Nationally, more than 8,900 square miles (23,050 kilometers) have burned this year, about 28 percent more than the 10-year average as of mid-August. California is having one of its worst years.

John Abatzgolou of the University of Idaho looked at forest fires and dry conditions in the western United States from 1979 to 2015 and compared that to computer simulations of what would be expected with no human-caused climate change. He concluded that global warming had a role in an extra 16,200 square miles (42,000 square kilometers) of forests burning since 1984. 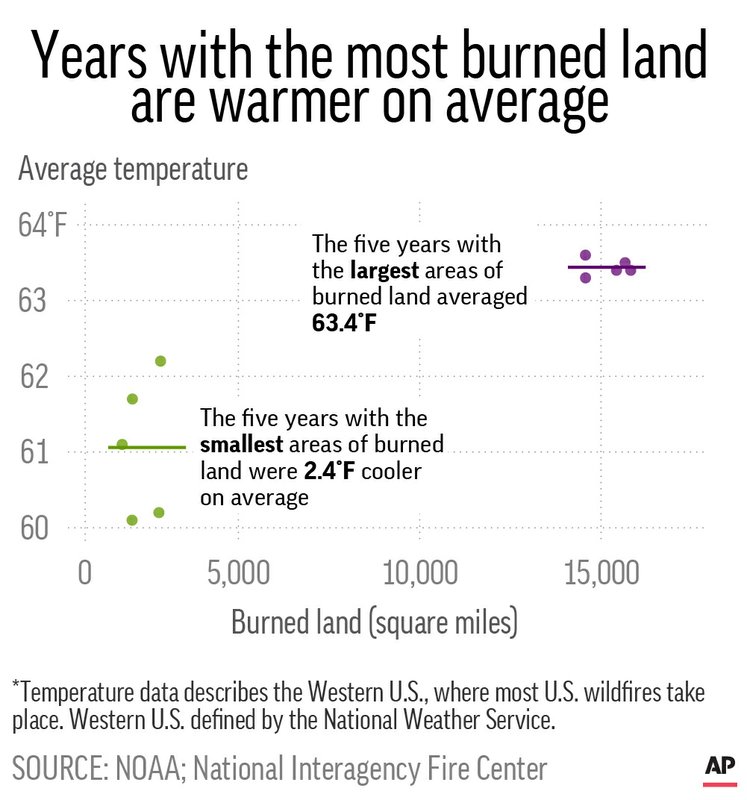 A study of the 2015 Alaska fire season — the second biggest on record — did a similar simulation analysis, concluding that climate change from the burning of coal, oil and gas increased the risk of the fire season being that severe by 34 to 60 percent.

One 2015 study said globally fire seasons are about 18.7 percent longer since 1979. Another study that year says climate change is increasing extreme wildfire risk in California where wildfires already are year round.

Contrary to fire scientists, Interior Secretary Ryan Zinke this week told Breitbart radio that “what’s driving” increased wildfires is an increase in fuel. He said the government has “been held hostage by environmental terrorist groups” that oppose clearing dead trees that they say provide wildlife habitat. Zinke, however, has acknowledged that climate change was a factor in worsening wildfires.