1959 racial slaying of Mississippi teen could get fresh look 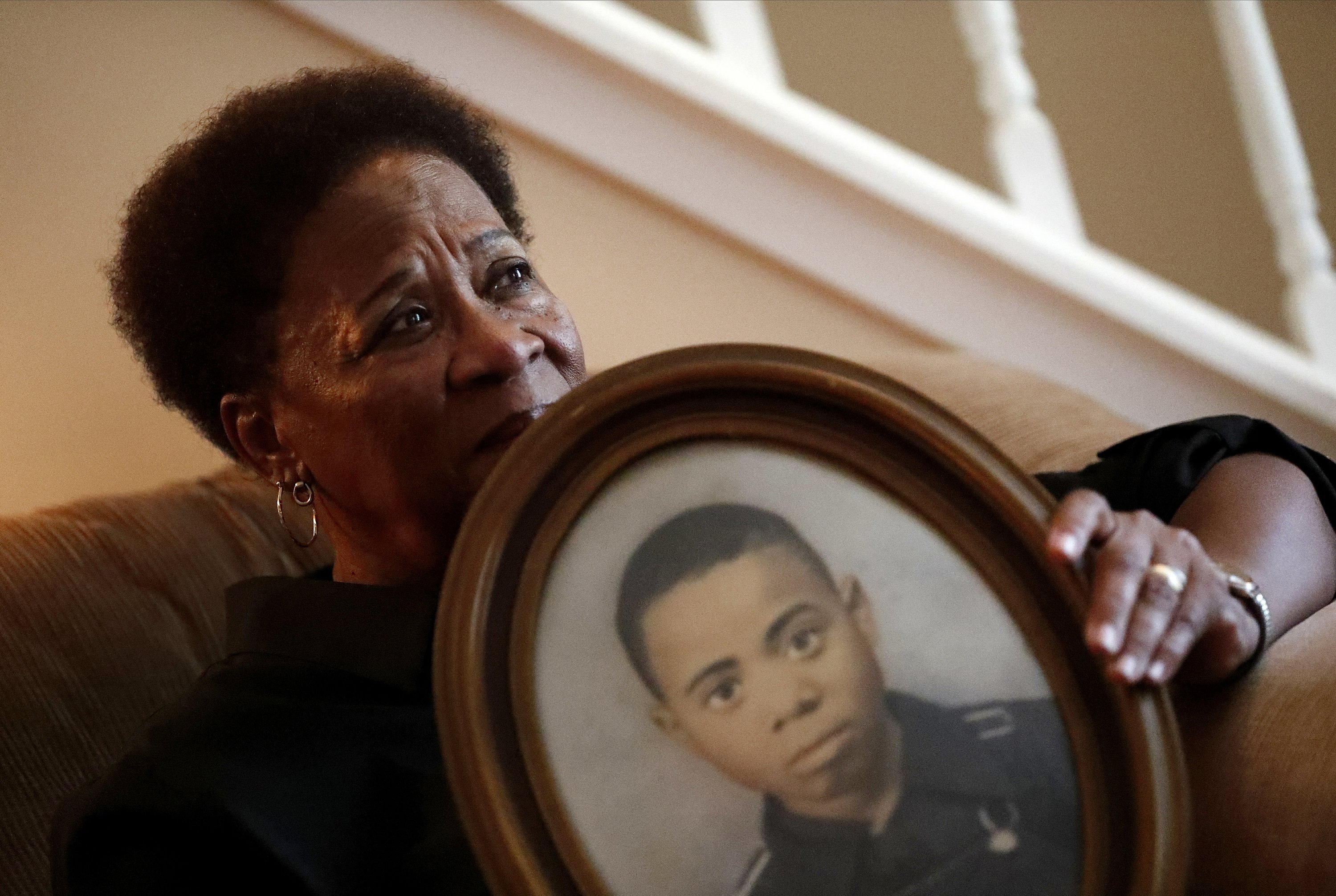 CORINTH, Miss. — Eberlene King remembers her 15-year-old brother as he lay dying, after white teenagers cruised through their black neighborhood in a pickup on Halloween night 1959 and shot him in the face.

“His eyes … were hanging out,” King recalled. “His head was full of pellets.”

William Roy Prather died the next morning in their hometown of Corinth, Mississippi, a few miles south of the Tennessee line.

Eight white teens were charged with murder, but only one was convicted. Jerry Darnell Glidewell, then 16, pleaded guilty to manslaughter in January 1960 and served less than a year in state prison. Six of the seven others in the truck got a year’s probation through youth court, and an 18-year-old walked free.

The black teen’s slaying has never drawn much attention, even as federal and state authorities in the past 15 years have re-opened investigations of racially motivated killings from the civil rights era.

Now, the U.S. Justice Department says it has referred Prather’s killing to the state of Mississippi “for potential prosecution.” The Associated Press dug into the case to reveal information not previously reported, including details about the Justice Department’s investigation and AP interviews with King and Glidewell.

It’s unclear whether a district attorney will pursue charges against any aging defendant in a decades-old case where witnesses’ memories may be fading and some pieces of evidence, including the truck and the shotgun, have disappeared.

The case is briefly mentioned in a report the department filed in March — the same one that said the department is reviving its investigation into the brutal 1955 killing of another black teenager in Mississippi, Emmett Till.

“Although prosecution of some of the subjects may be barred by double jeopardy and other subjects are deceased, the Department referred the matter to the state of Mississippi to determine whether any state prosecutions might be appropriate,” the Justice Department said of the Prather case.

King said FBI agents knocked on her door a few years ago and hand-delivered a letter from the Justice Department. The letter said no federal charges could be brought in the killing of her brother, based on laws that existed in 1959. It said “the only possible prosecution” would be for the state to bring unspecified charges against one suspect who was 18 at the time of the crime.

Corinth — pronounced coh-RINTH by locals — is home to about 14,600 people, 70 percent of them white and 24 percent black.

In the city, once besieged during the Civil War, schools and neighborhoods remained segregated through the 1960s. While some black residents remember fear and violence, others say the town was quiet as long as everyone, in the language of the times, “remembered their place.”

The 1950s and ’60s saw racial strife throughout the South, as whites resisted racial integration. Prather’s slaying came four years after Till’s brutal killing galvanized the civil rights movement and three years before violence erupted about 80 miles (129 kilometers) southwest of Corinth at the University of Mississippi when the first black student enrolled.

Inside the courthouse, old handwritten records show that on Jan. 26, 1960, Glidewell pleaded guilty to manslaughter: “Ordered to serve 5 yrs. in State Penitentiary, the last 4 yrs. of which suspended on good behavior.”

Glidewell, who goes by his middle name Darnell, now lives off a hilly country road north of Corinth. He answered the phone on a recent morning, and an Associated Press reporter asked about Prather’s killing.

“They charged me with that, yeah,” said Glidewell, now in his mid-70s.

As to what happened that Halloween night, he said: “I’d rather not talk to you on the phone.”

But Glidewell responded to a few more questions. He said investigators spoke to him about the case several ago, and one said: “‘Don’t worry about it.'”

Glidewell said “four or five” of the people with him that night are still alive. “I don’t know where they live right now,” he said. “I don’t ever see them.”

Their names don’t appear in court records near Glidewell’s, but they are listed in the Justice Department letter.

After the phone conversation, an AP reporter and photographer drove to Glidewell’s house and knocked on the door. His wife said he has liver cancer, his memory is failing and he did not want to talk.

The Justice Department letter says that, based on investigators’ interviews with witnesses, a group of white teens drove through a black neighborhood of Corinth on Halloween night 1959. Black witnesses said they saw the white teens throwing firecrackers at the black teens, and some young black people threw rocks and bricks at the truck. Investigators were told the white teenagers got a shotgun and shells from a home of one person in their group, then returned to the black part of town, where Glidewell shot Prather.

“Glidewell reported to police that before he fired the shotgun several of the subjects said, ‘There they are, shoot,'” the Justice Department letter said.

News reports from the time said Prather was not among those who had thrown rocks or bricks at the truck.

King, now 73, said her older brother was “a real quiet person” who had helped his friends clean up a church on Halloween night.

“He didn’t deserve what happened to him. … Well, nobody deserves that,” King said in a phone interview from her home near Atlanta. “He would just go to school, go back and do his chores at home.” 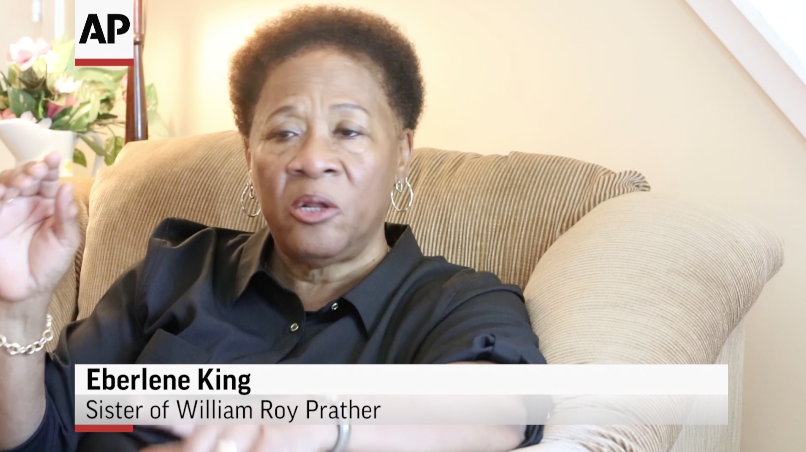 The Justice Department letter says the all-white grand jury that indicted Glidewell recommended he be treated with “leniency.” The grand jury recommended that six of the remaining white teens have their cases sent to youth court, and that the one 18-year-old in the group have his case sent to a July 1960 grand jury; investigators found no record indicating any indictment against him.

A judge put the younger teens on probation and released them from that by March 1961, writing that each “‘would make a good citizen,'” according to the Justice Department letter.

Johnnie Sue Johnson, a second cousin of Prather, lived near the funeral home and went to view his body; she was 13. She said his face was swollen from being shot. “He looked like he was 90-something years old,” Johnson said from her home in Champaign, Illinois. “It was just awful.”

One of Johnson’s nieces, Gennella Graham, was born in 1975 and grew up in Corinth but had never heard of Prather’s death until the summer of 2017, when she took a course at Tougaloo College in Jackson and was assigned to write about her hometown’s “hidden history.” Graham, who teaches English at Corinth High School, was given Prather’s name and called her aunt. Johnson told her about the killing and about their kinship to Prather. Johnson also told her that Prather’s friend who was with him that night, Lavelle Powell, survived but lost hearing in one ear because of the shooting. Powell later moved away from Mississippi, and he died a few years ago. 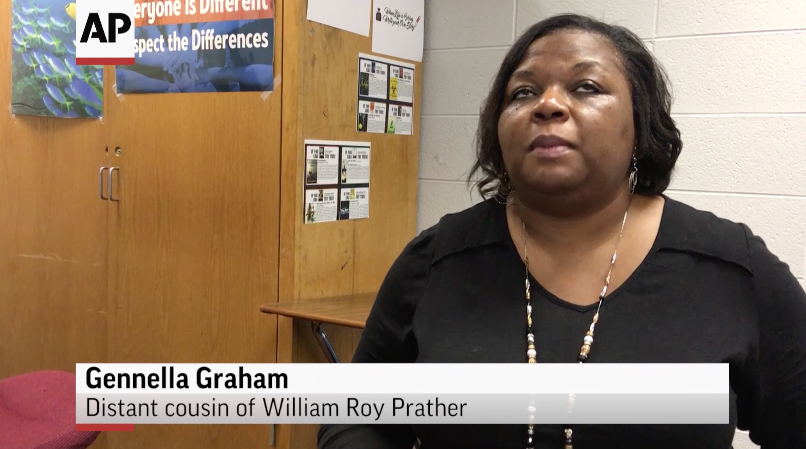 Graham wrote a poem about Prather, which says, in part:

“But no one asked what I thought,

“I know he just lived 15 years on this earth. But I would like to know — what was he interested in? Did he have a girlfriend? … Did he have a job somewhere? Where did he attend church?” Graham said. “I just want them to know that he was important. When you die, that’s not the end of your story.”

This story has been corrected to show that Gennella Graham was born in 1975, not 1974.