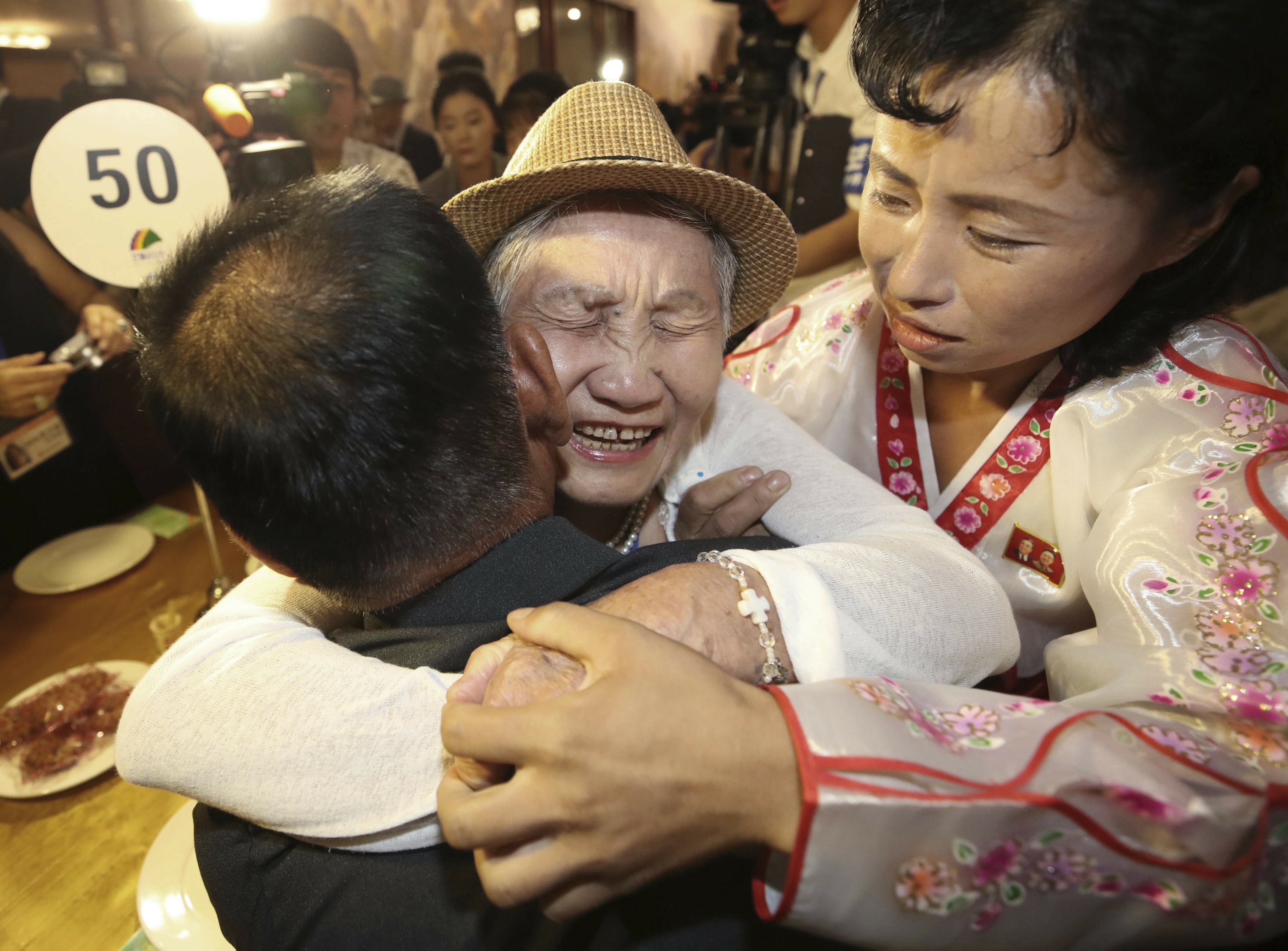 SEOUL, South Korea — A mother wails as she embraces a son she hasn’t seen since the 1950-53 Korean War. A woman weeps as she greets a grandfather she never got to know.

The scenes of Koreans meeting this week, likely for the last time before they die, are heartbreaking, but they often bely a highly political and tightly controlled event in which participants often struggle to have genuine conversations.

Much of the awkwardness centers on the defining fact of the Korean Peninsula: For decades it has been divided between the authoritarian North, originally backed by the Soviet Union and then, during the war, communist China, and the U.S.-backed capitalist South. Citizens from both nations, especially the elderly who remember the bitterness and bloodshed of the war, often wear their nationalism on their sleeves, and some South Koreans have complained that their relatives take every chance to score propaganda points for their authoritarian nation.

After the initial tears at North Korea’s Diamond Mountain resort, Cha Jae-geun, an 84-year-old South Korean, and his 50-year-old North Korean nephew began an awkward exchange Monday over international politics surrounding the Korean Peninsula and the origins of the war that split their family apart and killed and injured millions.

The Koreas should “drive the American bastards out,” Cha Song Il, the nephew, said, according to South Korean pool reports. He accused the United States of being unfaithful to the commitments of a June summit between North Korean leader Kim Jong Un and U.S. President Donald Trump, in which they expressed an aspirational goal for a nuclear-free peninsula without describing when or how it would occur.

The elder Cha reminded his nephew that it was North Korea’s founder, Kim Il Sung, the grandfather of the current leader, who triggered the war by ordering a sneak attack on the South in June 1950.

“That’s a lie,” the nephew replied, waving both hands. “The Korean War was something the Americans did. “We fought against (our enemies) with our own strength.”

Cha Jae-geun smiled and quickly changed the subject, as South Korean officials urge their reunion participants to do if politics come up. South Korea’s government instructs participants not to criticize the North’s leadership and economy during the reunions.

Some North Korean participants, who are reportedly chosen for the reunions based on their loyalty to their authoritarian rulers, were eager to show their government commendations to their South Korean relatives. In at least once case, this resulted in another awkward exchange.

Ju Yong Ae, a 52-year-old North Korean who came to meet her 86-year-old South Korean aunt, steadfastly refused when a South Korean official who had come to the North to help manage the meeting repeatedly asked her to put her “Kim Il Sung commendation,” a public service medal, below the table.

“How can you put down our supreme dignity?” Ju asked.

After sleeping separately Monday night, the relatives had private meetings at hotel rooms on Tuesday morning before meeting again in group sessions later in the day. Tuesday’s exchanges were less emotional and more amicable than Monday’s.

During their first encounter Monday, Kim Sun Ok wiped away her tears when she said, “Let’s live together even at least one minute after unification before we die.”

South Korean participants at past reunions have complained that the heavy monitoring presence of North Korean officials and intense media coverage made genuine conversations difficult or impossible.

The North sees the reunions as a crucial tool to win concessions from the South, but it has rejected the South’s demands to increase the number of reunions and the people participating in them.

The North also ignores the South’s proposals for letter exchanges and hometown visits, something currently banned. Pyongyang doesn’t want the reunions expanded because it fears they would give citizens a better awareness of the outside word and weaken its grip on power, analysts say.

The North uses the reunions for propaganda purposes, carefully choosing participants based on loyalty and instructing them to praise the authoritarian leadership during the meetings. But Koh Yu-hwan, a North Korea expert at Seoul’s Dongguk University, said it could become harder for the North to maintain previous levels of control because the participants are so old now that it’s harder to train them to do what the government wants.

Nearly 20,000 people have participated in 20 rounds of face-to-face reunions held between the countries since 2000. No one has had a second chance to see their relatives. Past participants express frustration and anger that their final conversations with North Korean relatives included so little genuine conversation.

Hong Yong-gee, who went with his mother for a 2015 reunion at Diamond Mountain and met his three North Korean aunts, said Tuesday that it seemed his North Korean relatives were working off a script.

“They praised the leadership of Kim Jong Un and life in North Korea so frequently that any genuine conversation became impossible,” Hong said. “It was difficult for my mother and aunts to talk freely when several North Korean officials stationed themselves so close to our table, listening in to whatever we were saying.”

Choi Ho-seok, 83, also said that his 76-year-old sister kept praising the North’s government when they met in 2015 under the watchful eyes of North Korean officials.

“There were things closer to our hearts that we couldn’t talk about because we were being watched closely at all times,” he said. “It would be painful if that’s the last time I get to see her.”