The Latest: Judge raises bond to $5M in Iowa killing 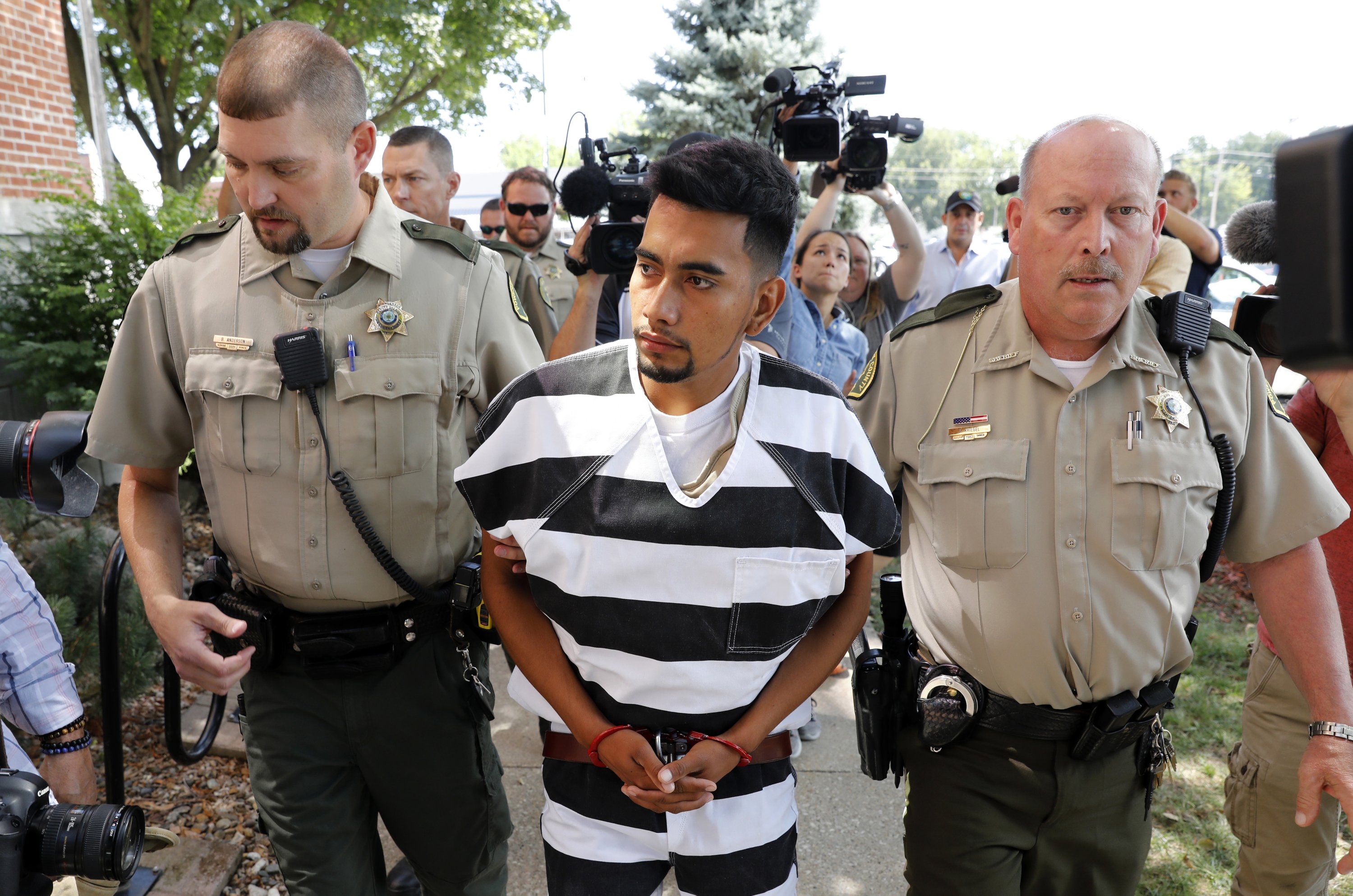 MONTEZUMA, Iowa — The Latest on a man in the U.S. illegally who is accused in the kidnapping and killing of an Iowa college student (all times local):

A judge has ordered a man charged in the kidnapping and murder of an Iowa college student to be jailed on a $5 million cash-only bond.

Cristhian Bahena Rivera had been held since Tuesday on a $1 million cash-only bond after being charged with first-degree murder in the death of college student Mollie Tibbetts.

At a hearing Wednesday, Magistrate Judge Diane Crookham-Johnson granted a state prosecutor’s request to raise the bond amount to $5 million.

Assistant attorney general Scott Brown noted that Rivera is suspected of being in the country illegally, and is charged with a “heinous crime.” He says the higher bond amount would protect the community.

Rivera’s lawyer, Allan Richards, said he plans to ask for a bond review hearing at a later date. He said his client is a young man who has no prior criminal history and has worked for a prominent local farmer for years.

A judge has rejected a lawyer’s request that the public be barred from an initial hearing for a man charged with killing an Iowa college student.

Allan M. Richards argued in a motion filed Wednesday that his client’s right to a fair trial would be hurt by media coverage if reporters were allowed to remain in the courtroom. He says that comments by senior government officials, including President Donald Trump, have presumed his client is guilty and media coverage is highlighting those comments.

Richards represents Cristhian Bahena Rivera, who is charged with first-degree murder in the death of Mollie Tibbetts. Her body was found Tuesday near the central Iowa community of Brooklyn.

An attorney for the man charged with murder in the death of an Iowa college student is claiming the government is wrong in its statements that he is in the country illegally.

Allan M. Richards, an attorney for Cristhian Bahena Rivera, stated in a court document filed Wednesday that an employer has said Rivera is in the U.S. legally. The document names Craig Lang, a former head of the Iowa Board of Regents who is co-owner of a dairy that employed Rivera. The Lang family said in a statement Tuesday that Rivera’s immigration status had been confirmed by an E-Verify electronic immigration status check.

Richards argued for a gag order in the case and mentioned President Donald Trump, who he described as “sad and sorry Trump.” Trump mentioned the case at a rally Tuesday night in West Virginia and said it demonstrated the need for tougher immigration laws.

The lawyer asked the court to prevent the government from claiming Rivera is in the country illegally.

Rivera is charged with first-degree murder in the death of 20-year-old Mollie Tibbetts.

The family of an Iowa college student who had been missing for weeks until her body was found hidden in a cornfield is acknowledging, “Our hearts are broken.”

The family of 20-year-old Mollie Tibbetts released a statement Wednesday that notes their grief but also thanks “all of those from around the world who have sent their thoughts and prayers for our girl.”

The statement adds, “We know that many of you will join us as we continue to carry Mollie in our hearts forever.”

Tibbetts’ body was found Tuesday and 24-year-old Cristhian Bahena Rivera has been charged with first-degree murder in her death. Tibbetts was last seen July 18.

The Tibbetts family says they need time to grieve in private but emphasized they appreciate the “outpouring of love and support that has been shared in Mollie’s name.”

The man charged in the kidnapping and killing of an Iowa college student is expected to make his initial court appearance Wednesday afternoon.

Cristhian Bahena Rivera is charged with first-degree murder in the death of Mollie Tibbetts, who disappeared July 18 from Brooklyn, Iowa. He’s set to appear at the Poweshiek County Courthouse in Montezuma at 1 p.m.

A criminal complaint alleges Rivera followed Tibbetts while she was out for a run, abducted and killed her, and dumped her body in a cornfield. Investigators say Rivera led them to a body believed to be Tibbetts early Tuesday.

An autopsy is scheduled Wednesday by the state medical examiner to determine the cause of death.

Court records don’t list an attorney for Rivera, who is jailed on a $1 million cash-only bond.

Authorities say a man in the U.S. illegally has confessed to kidnapping a 20-year-old University of Iowa student, killing her and dumping her body in a cornfield.

Twenty-four-year-old Cristhian Bahena Rivera is charged with first-degree murder in the death of Mollie Tibbetts of Brooklyn, Iowa. Rivera is being held on a $1 million cash-only bond. An initial court appearance is scheduled for 1 p.m. Wednesday.

President Donald Trump noted the arrest and called for immigration law changes at a rally in West Virginia. And Republican Iowa Gov. Kim Reynolds said residents “are angry that a broken immigration system allowed a predator like this to live in our community.”