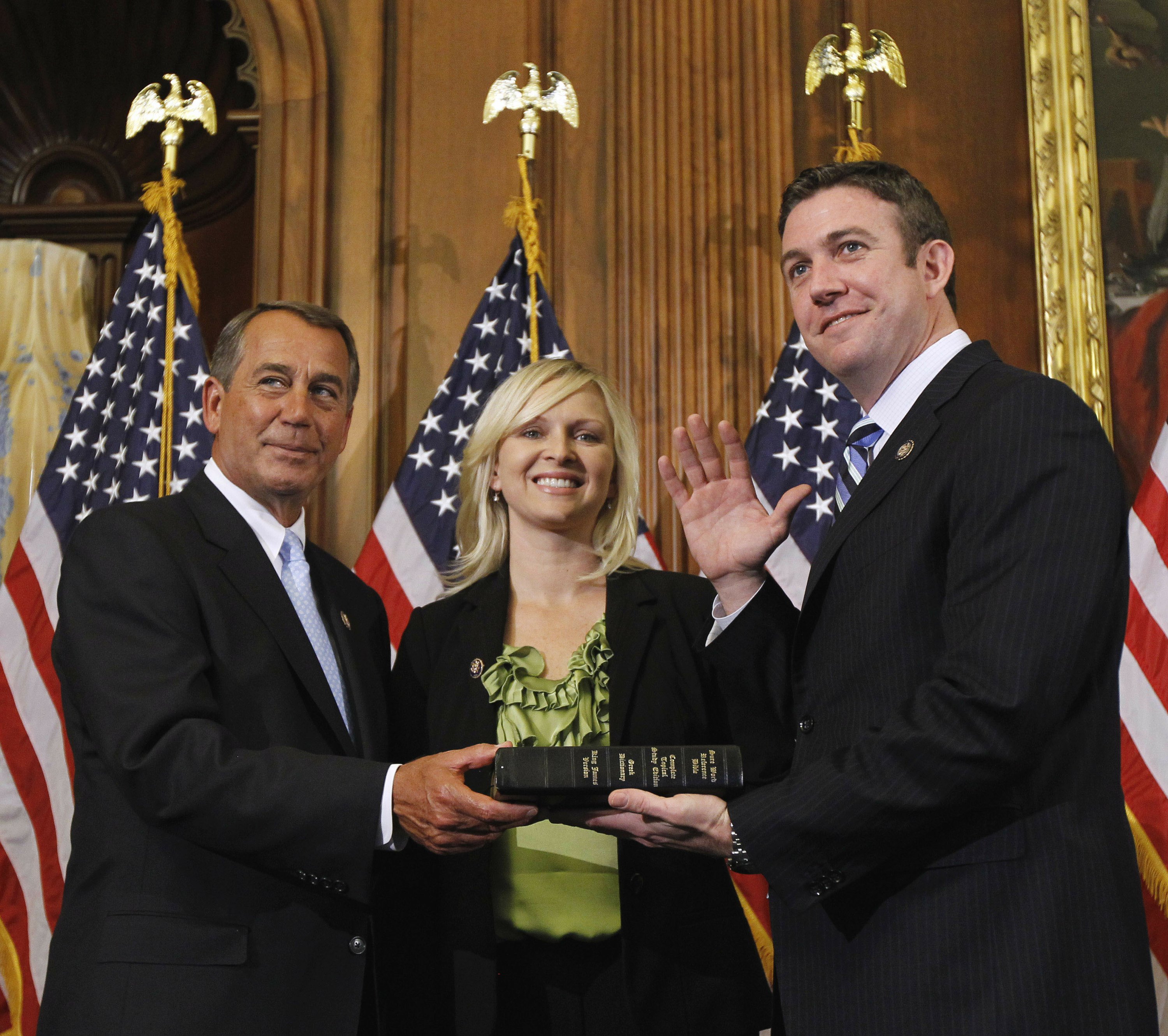 SAN DIEGO — Despite an ongoing FBI investigation into his campaign spending, U.S. Rep. Duncan Hunter coasted through the June primary election largely unscathed, finishing first by a 30-point margin and establishing himself as a strong favorite to hold the seat in November.

On Tuesday, the Republican congressman and his wife were charged by a federal grand jury with using more than $250,000 in campaign funds to finance family trips to Italy and Hawaii, golf outings, school tuition, theater tickets — even fast food purchases — and attempting to conceal the illegal spending in federal records.

The 48-page indictment brings a jolt of uncertainty into the contest, in a year when Democrats have targeted a string of Republican-held House seats across the state.

In the strongly Republican district, “Hunter is probably still the favorite, but not as overwhelmingly as he was before,” he added.

Asked for comment, a Hunter spokesman sent an Aug. 6 letter from Hunter’s attorney, Gregory A. Vega, to U.S. Deputy Attorney General Rod J. Rosenstein asking him to postpone the indictment.

Vega contended that there was a “rush to indict.”

There was “politically motivated” pressure to wrap up the investigation in order to tarnish Hunter before the general election after he handily won a June primary, Vega contended.

Hunter was among the earliest Republican members of Congress to endorse President Donald Trump, and Vega’s letter suggested his outspoken support made him a target for what he described as politically biased prosecutors.

The indictment depicts a couple freely dipping into campaign cash for years to bankroll their personal lifestyle, while their household budget was awash in red ink. The spending ranged from the banal to lavish, from movie tickets to $6,288.74 for Hunter to take his family on a vacation to a resort in Lahaina, Hawaii.

In a statement, House Speaker Paul Ryan called the charges “deeply serious” and said Hunter will be removed from his committee assignments, pending resolution of the case. House Democratic leader Nancy Pelosi said Ryan should call on Hunter to resign.

Hunter is a familiar name in the 50th Congressional District in San Diego and Riverside counties — his father held the seat for years. University of California, San Diego political scientist Thad Kousser said Hunter would be on safe ground if the race centered on the Trump agenda in an area with a Republican pedigree.

Now, the indictment “makes it a race about (Hunter), about corruption and in some ways ties him to Donald Trump’s biggest vulnerabilities,” Kousser said, referring to the guilty plea Tuesday of Michael Cohen, Trump’s former personal lawyer, on campaign-finance violations and other charges, on the same day Trump former campaign chairman Paul Manafort was convicted of eight financial crimes.

Hunter’s Democratic opponent, Campa-Najjar, stopped short of calling on the congressman to resign. “I think justice should run its course,” he said.

Campa-Najjar said Hunter was “in it for his own interests” and that it is time to “get rid of the corruption and greed that has held Washington captive for too long.”

The California secretary of state’s office says there is no process in the elections code for Hunter to remove his name from the ballot, and there can be no write-in candidates for the November election.

In a statement, California Republican Party Chairman Jim Brulte said “individuals are presumed innocent” until a jury convicts them.

“The congressman and his wife have a constitutional promise to their day in court and we will not prejudge the outcome,” Brulte said.

According to the indictment, in 2015 Hunter attempted to set up a day tour of a U.S. naval facility in Italy in order to justify the use of campaign funds during a vacation with his family. When the proposed date didn’t work out, he told his chief of staff, “Tell the Navy to go (expletive) themselves,” the documents said.

In March 2015, Hunter told his wife he wanted to buy “Hawaii shorts” but ran out of money, the indictment said. She told him he should buy them at a golf pro shop so they could later describe the purchase as “some (golf) balls for the wounded warriors,” according to court documents.

The couple spent more than $1,500 on video games in 2015, prosecutors said. In April 2015, Margaret Hunter spent nearly $1,000 in campaign funds to fly her mother and her mother’s boyfriend to Poland and later told the campaign treasurer they were campaign trips to New Orleans and Kentucky.

“The Hunters spent substantially more than they earned,” the indictment said. “They overdrew their bank account more than 1,100 times in a 7-year period resulting in approximately $37,761 in ‘overdraft’ and ‘insufficient funds’ bank fees.”

The House Ethics panel had investigated allegations that Hunter improperly used campaign funds to pay for tens of thousands of dollars in personal expenses. The panel said in March that it was delaying the inquiry at the request of the Justice Department.

Hunter’s office said at the time that one of the charges he repaid was a $600 fee for flying a pet bunny with his family. There was no intent to stick donors with the cost, then-Hunter spokesman Joe Kasper said at the time.