Voters deciding primaries for governor, US House in Alaska 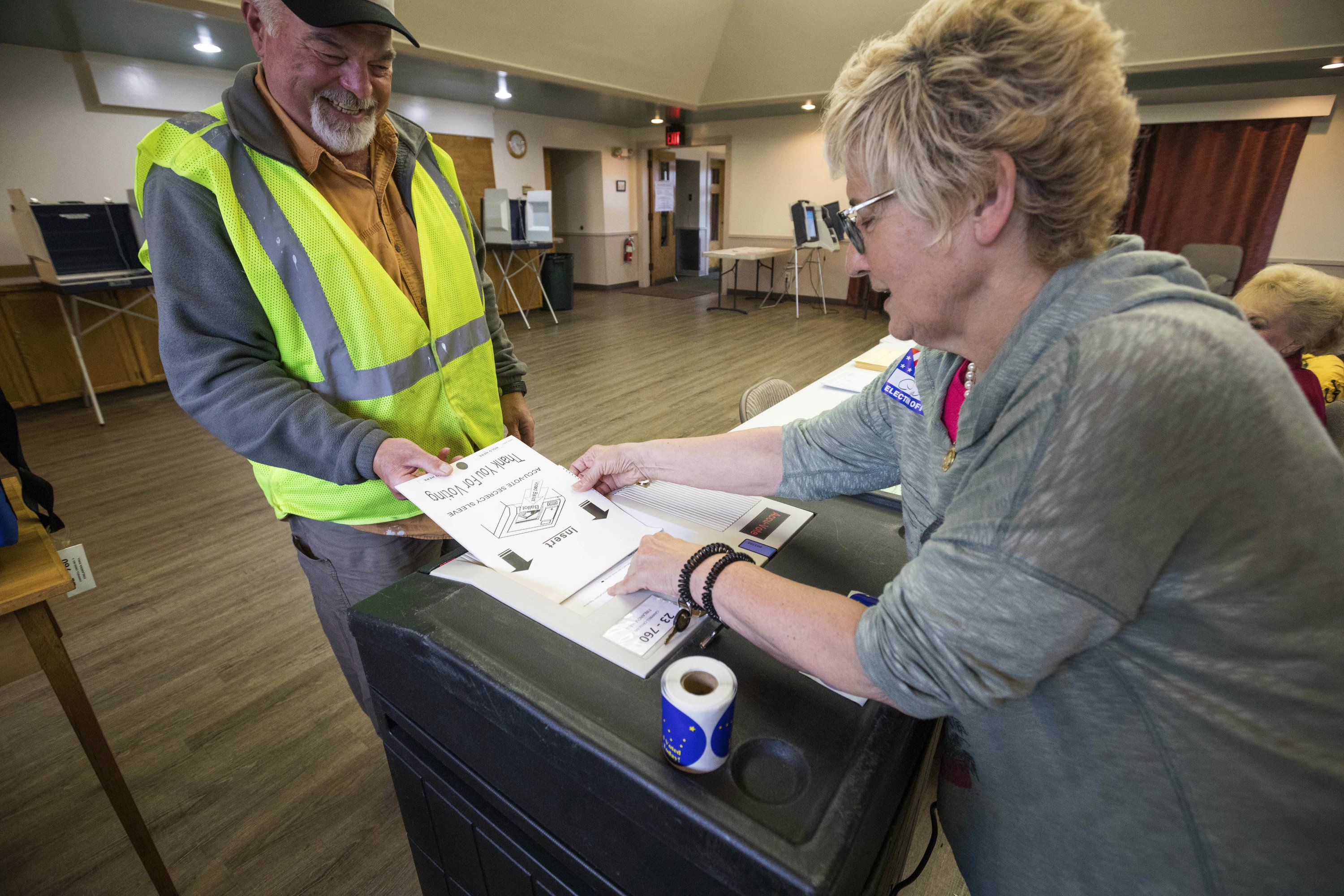 ANCHORAGE, Alaska — Turnout was light in early voting Tuesday as Alaskans headed to the polls to pick candidates in the state primary.

Voters will choose a Republican nominee to advance to what is expected to be a hard-fought battle for governor this fall. They’ll also choose the latest contender to try to unseat Republican U.S. Rep. Don Young, the longest-serving member of the U.S. House.

In the Democratic U.S. House primary, independent Alyse Galvin and Democrat Dimitri Shein are among those vying for a shot to challenge Young, 85, who has served in the House for 45 years and is expected to win his primary.

The Alaska Democratic party changed its rules to let independents run in its primaries if they want the party’s backing.

Party primaries determine who runs as a ticket in November. Candidates who bypass the primaries and instead gather signatures to appear on the general election ballot — as Walker opted to do — have a say in their running mates.

Walker flirted with running in the Democratic primary but decided not to when it appeared that Begich would run. Walker wanted to run with Lt. Gov. Byron Mallott, a Democrat. Walker changed his party affiliation from Republican to undeclared in 2014 in forming a so-called unity ticket with Mallott, which was backed by Democrats.

The next governor will face big issues, including crime and the economy, and decisions on the annual check that Alaskans receive from the state’s oil-wealth fund, the Alaska Permanent Fund.

Dunleavy and Treadwell have positioned themselves as conservatives critical of a 2016 criminal justice overhaul and the state’s approach to budgeting. Both support the formula in state law for calculating the oil-wealth check, which has been ignored, first by the governor and then by legislators, for the past three years amid a budget deficit.

Dunleavy, a former educator, left the Senate in January after five years to focus on the campaign. Treadwell, who was lieutenant governor under Parnell from 2010-2014 and most recently worked for a private equity firm, has cast himself as more experienced.

Don Smith, a former state lawmaker and Anchorage assemblyman, wants a “solid conservative” as Alaska’s next governor. So the Anchorage Republican voted Tuesday for Dunleavy, the man he believes will fit that bill.

Smith said he thinks his choice has a good chance of beating Walker and Begich in November.

“I think if Dunleavy is the nominee, which I think he’ll be, he’ll be running against hopefully Begich and the current governor, and they’ll split the vote, and the Republican will win,” Smith said.

For the U.S. House, Smith voted for Young. “I’ve never not voted for Don Young, so my vote won’t change,” Smith said.

In east Anchorage, Bill Cody voted for Treadwell, whom he said made the most sense to him. Cody voted for Walker four years ago but didn’t like the governor’s handling of the Permanent Fund dividend.

“I don’t think he listened to the people at all,” Cody said, adding he hopes it hurts Walker at the polls. “I didn’t even consider voting for him this time.”

Cody’s wife, Holly Cody, also is an undeclared voter, but she voted on the Democratic ballot. In the U.S. House race, she supported Shein. She said she met Shein and he left a good impression.

“He’s a family man,” she said. But she’s not holding out hope that anyone will defeat Young. “Don Young’s been around forever. I think he’s got a lot of support in Alaska.”

Voting in southwest Anchorage, Richard Thwaites said he voted for Treadwell because of his experience.

“He’s been internationally involved, state involved,” Thwaites said. He considered it asset that Treadwell has not been “part of the core legislative group” like Dunleavy.

The primaries also include a contested GOP race for lieutenant governor and state legislative races.

Of the candidates in the Democratic U.S. House race, Galvin, an education advocate, and Shein, a Russian immigrant who became involved in politics after President Donald Trump’s election, have most actively campaigned.

Shein has pushed for Medicare for all. Galvin said she supports comprehensive health care for all Alaskans but says steps can be taken to improve the existing system in the meantime.

Shein said Galvin’s ties to the oil and gas industry bother him; Galvin’s husband is an executive with a petroleum company. Galvin said she’s her own person.

George Freeman, a self-described liberal Democrat voting at Inlet View Elementary in downtown Anchorage, chose Galvin on the advice of his neighbors.

Bob Koontz also voted for Galvin at Inlet View Elementary but said his main political concern is a movement to amend the U.S. Constitution so that corporations are no longer considered citizens.

“If we could take of that one thing, we could fix everything else,” Koontz said. “The candidates would no longer be owned by corporations. They would represent people.”

Young faces a primary challenge from Thomas “John” Nelson and Jed Whittaker, who have limited resources and little name recognition.