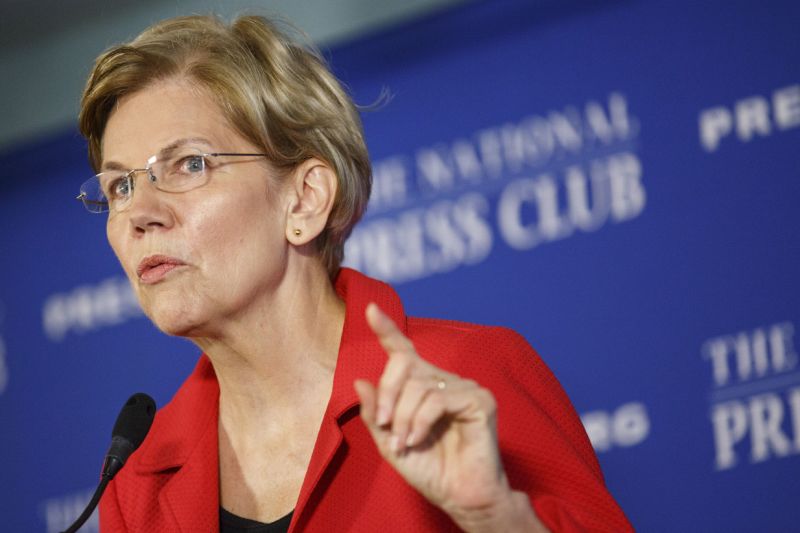 As part of her anti-corruption campaign, Sen. Elizabeth Warren (D-Mass.) announced a bill on Tuesday that would forbid members of Congress and high-ranking executive branch officials from owning any individual stocks. At the National Press Club in Washington D.C. where she unveiled her plan, Warren called her bill the “most ambitious anti-corruption legislation” since Watergate.

Speaking of political corruption throughout the government, Warren said, “The problem is far bigger than Trump” — though clearly her bill takes aim at Trump, who has refused to disclose his tax returns, with its requirement for presidential and vice presidential candidates to disclose eight years’ worth of tax returns and sell off assets that present a conflict of interest in a blind trust.

In addition, the Anti-Corruption and Public Integrity Act would ban members of Congress from working at lobby firms after the exit from office. This part of the plan can easily be made law. One of the clearest examples of the revolving door in action is Eric Holder, former attorney general under President Barack Obama.

Holder refused to prosecute several banks while he was attorney general — including Morgan Stanley, Wells Fargo, Chase, Bank of America and Citigroup — and now he represents those same banks in private practice.

Not that there aren’t any examples of Republicans also acting in bad faith. Republican Rep. Chris Collins of New York was indicted for insider trading last Wednesday.

These examples show that some reform is clearly necessary. Warren’s policy proposal would bring about much-needed change. It probably needs a lot of fine tuning to figure out what elected officials who own stock would do with their stock, whether they could transfer stock to their right-hand men and other important questions.

But as a theory, the idea that congressional representatives should not own stock and not have any personal interest or stakes in enacting policies is a good one. Will Warren’s fellow Democrats get on board with this plan, or will they refuse to give up their rich livelihood for the interest of the American people? Let’s see how many will go on the record in support of Warren’s plan.