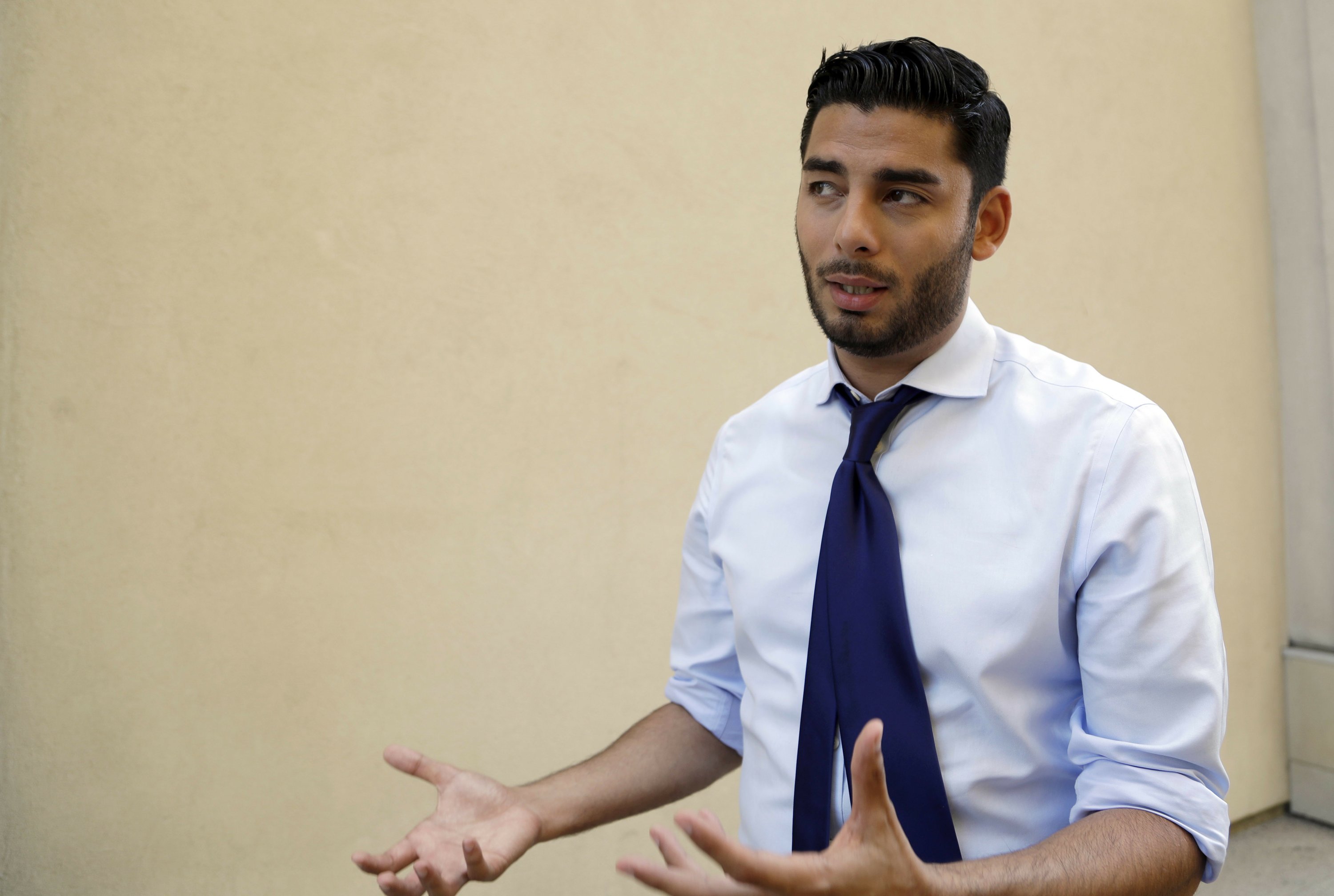 SAN DIEGO — Democratic congressional candidate Ammar Campa-Najjar was working on a TV advertisement to boost his exposure when news broke that his opponent, the heavily favored Republican U.S. Rep. Duncan Hunter, was indicted.

The 29-year-old former Obama administration Labor Department official whose father is a Palestinian Muslim and mother a Mexican-American Catholic has never held elected office. In Hunter, he’s taking on a widely known Iraq war veteran who coasted through the June primary in the most Republican district in Southern California with a 30-point, first-place finish after serving five terms.

With the indictment, Campa-Najjar suddenly found himself thrust in the spotlight — fielding calls throughout the night from the Democratic Congressional Campaign Committee, supporters, even some local Republican elected officials. Within 24 hours, he received hundreds of emails and gave nearly two dozen interviews to local and national media outlets.

It was the attention, he said, his campaign deserved.

After months of knocking on doors, Campa-Najjar is seizing the opportunity to re-introduce himself to voters in the 50th District, many of whom are not familiar with his name.

“We’re excited,” Campa-Najjar said in an interview with The Associated Press. “I don’t crow over the misery of other people. I feel for him and his family, but I feel more for the people of our district who deserve some much-needed representation after many years of not having a real representative.”

The Hunter name is something of a political dynasty in the area. Hunter’s father was elected to the seat in 1980 and held it until his son won in 2008.

But the indictment of Hunter and his wife Margaret that alleges they illegally converted his campaign account into a household checkbook reorders his re-election contest, giving Democrats a suddenly stronger hand in a district that for decades has embraced Republican candidates. The Hunters pleaded not guilty Thursday.

Campa-Najjar said he was hopeful of breaking the Hunter family’s nearly 40-year hold on the district that runs largely east of coastal San Diego, abutting Camp Pendleton Marine Corps base and stretching to a remote section of U.S.-Mexico border.

Campa-Najjar vows to reach people who had voted for President Barack Obama in 2008 and eight years later backed Donald Trump. He said “they are not ignorant. They are ignored, by my party, their party and the country.”

He said he offers “sensible solutions” that cross party lines, including Medicare-for-all if it does not increase government debt and free college tuition based on merit and need.

He does not believe in abolishing the Immigration and Customs Enforcement agency like some liberal candidates. Campa-Najjar, who lives in Jamul near the U.S.-Mexico border, says walls are not the answer when 40 percent of those entering the U.S. illegally come by plane and overstay their visas. He supports tougher fines for employers who break immigration laws and believes that immigrants who were brought to the United States as children should be given U.S. citizenship.

Campa-Najjar said his motivation for running is personal.

Born in San Diego County, his mother, who divorced his father when he was 8 and raised Campa-Najjar and his brother, did not have the support she should have from the government.

At 15, he worked as a janitor to help her pay the bills.

He spent part of his childhood in Gaza, before coming back to San Diego County, and is fluent in Spanish and Arabic.

Campa-Najjar said he is proud of his heritage but is American first. He has made clear that he has no personal connection to his grandfather, who was the member of a Palestinian terror group and orchestrated an attack in the early 1970s that killed 11 Israeli athletes at the 1972 Olympic Games in Munich.

Campa-Najjar said he never met his grandfather, who was killed by Israeli commandos 16 years before Campa-Najjar was born.

“I’m happy to take responsibility for my own choices and my own decisions,” he said. “I think other men are responsible for their own crimes, whether it’s somebody who I share a lineage with and nothing else, or a sitting congressman whose being indicted and could be facing serious charges in the future.”

About 35 percent of the district is Latino and 15 percent is of Middle Eastern descent. One of Campa-Najjar campaign offices is in the city of El Cajon east of San Diego, near a business district with falafel shops, taco stands and signs in Arabic, English and Spanish, reflecting the district’s changing demographics as immigrants and refugees have settled there.

It is in a dilapidated home with yellow tape around the front porch. On a recent day on the door, a paper sign under Campa-Najjar’s portrait on a red white and blue poster told visitors to knock on the back door.

Campa-Najjar’s campaign has been a largely grassroots operation that until now has largely gone unnoticed as Democrats have concentrated on other districts believed to be more vulnerable for Republicans. The party holds a nearly 15-point registration edge over Democrats, and President Donald Trump won the district by the same margin while losing statewide by more than 4 million votes in 2016.

But that changed this week.

“I’m getting a lot of support as you can imagine,” he said.

There is no doubt a win would be an upset even with the allegations against Hunter and his wife. The couple has been charged by a federal grand jury with using more than $250,000 in campaign funds to finance family trips to Italy and Hawaii, golf outings, school tuition and theater tickets.

Voters in Hunter’s rural hometown of Alpine were sharply divided on what it all means. Some are shocked, some outraged, and some are rising to defend Hunter and his claim of being pursued by politically motivated prosecutors eager to see one of Trump’s early supporters in Congress fall.

Campa-Najjar said he feels “saddened a bit” that a combat veteran returned from the battlefield and lost his way, becoming the “poster child of corruption” for Washington. He added that voters, including Hunter’s base, want honest politicians.

“If we are a nation of laws, then you cannot in good conscience vote for Duncan Hunter,” he said.