Republicans tend to shrug off accusations against Trump 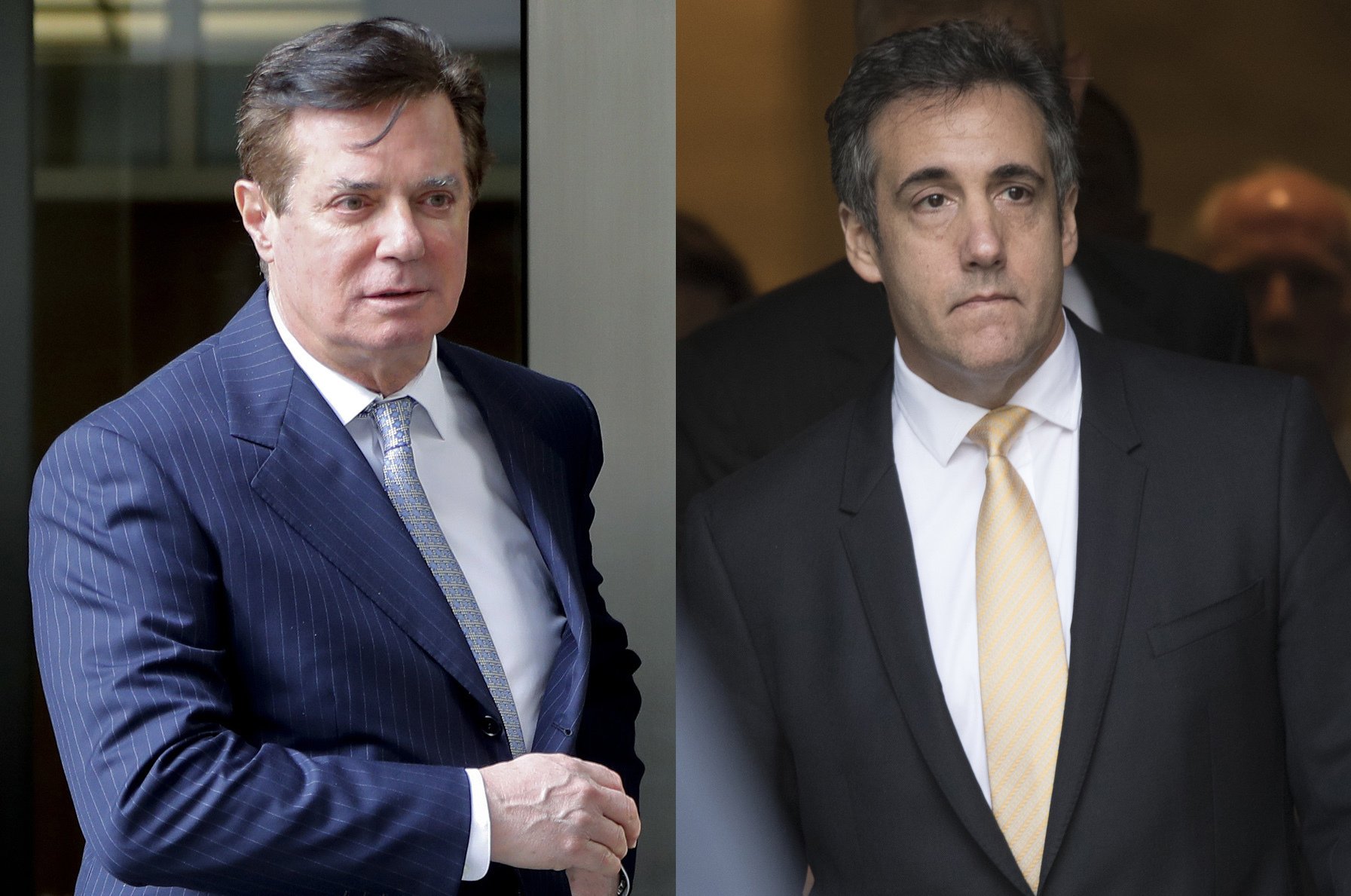 WASHINGTON — After President Donald Trump was implicated in a federal crime, members of both parties dismissed talk of impeachment, with Republicans shrugging off the accusations or withholding judgment.

The legal entanglements surrounding Trump — the guilty plea by former lawyer Michael Cohen and the fraud conviction of one-time campaign chairman Paul Manafort — delivered a one-two punch Tuesday that left lawmakers struggling for an appropriate response ahead of the midterm campaigns.

Trump’s strongest supporters echoed his “no collusion” retorts, suggesting that, absent any evidence that he worked with Russia to influence the 2016 election, there is just no high-crimes-and-misdemeanors case for impeachment.

Democrats, meanwhile, are trying to tamp down expectations from their liberal base of taking on the president for fear that impeachment talk will cause GOP voters to rally around Trump in November.

The dynamic underscored the political difficulty of impeachment proceedings on Capitol Hill, especially for Republicans who have been reluctant to criticize the president but now face a new chapter in what has been a difficult relationship.

Senate Majority Leader Mitch McConnell, R-Ky., brushed past reporters Wednesday without answering questions about Cohen or the possibility that the lawyer’s accusations about an illegal campaign cover-up are grounds for impeachment proceedings. House Speaker Paul Ryan, R-Wis., who is away from Washington, had no direct response. An aide said he needs more information.

Other Republicans, though, filled the gaps.

He explained that impeachment is a political and legal term of art and said there needs to be a tipping point in public opinion that would push Congress to act. It’s not there yet, he tweeted.

Doug Deason, a Texas-based donor and major Trump supporter, said voters simply don’t care that Trump behaves badly at times and has associated with people who broke the law.

“In no way, shape or form did we think we were hiring St. Trump to repair the morals of the country,” he said.

Jerry Falwell Jr., the president of Liberty University and a Trump confidant, said: “Anything short of the campaign actually conspiring with Russia to try to impact the election, anything short of that will just be background noise.”

Even those few Republicans who have been willing to speak out about Trump are treading carefully in the wake of Cohen’s guilty plea.

“I don’t think I’ve witnessed anything like I’ve witnessed over the last year and a half. Probably, the American people haven’t in modern times,” said retiring Sen. Bob Corker, R-Tenn. But he stopped short of passing further judgment on the Cohen case.

“I’m sure there’s going to be other revelations that come up,” he said, “and I think we ought to just let the process work.”

The president defended the hush-money payments Wednesday, saying, incorrectly, that the effort outlined in Cohen’s guilty plea wasn’t “even a campaign violation.” Trump told Fox News in an interview that the payments “didn’t come out of the campaign, and that’s big.”

The accusation from Cohen has inflamed public debate about impeachment.

Democratic donor Tom Steyer’s Twitter feed called for others to join his campaign to impeach the president. “How much more corruption do we need to see?” he tweeted.

Ben Wikler, Washington director for the liberal advocacy group MoveOn, wants Democrats in Congress to join organizations like his that have been demanding impeachment for weeks.

“Now that Trump’s personal lawyer has implicated him in a crime, not supporting impeachment feels like a dodge,” Wikler said. “Impeachment doesn’t have to be the core of your message to the electorate, but it’s not something you can bury your head in the sand and ignore.”

But House Minority Leader Nancy Pelosi, D-Calif., said that unless other information emerges, impeaching Trump is “not a priority” for Democrats if they regain control of the House this fall. Pelosi said she prefers to see Democrats work to ensure special counsel Robert Mueller can finish his investigation.

“If and when the information emerges about that, we’ll see,” Pelosi said Tuesday as the news about Cohen was unfolding.

He expressed concern about Kavanaugh’s unwillingness to indict a sitting president, as is Justice Department policy, or subpoena a president to testify. Kavanaugh’s confirmation hearing is set for Sept. 4, despite his efforts to postpone it.

“This Republican Congress has done almost nothing to check this president,” Schumer said. “We cannot allow the Supreme Court to be captured as well.”

Meanwhile, senators of both parties warned that Trump should not consider granting Manafort a pardon. “It would be an enormous mistake and misuse of his power to pardon,” said Sen. Susan Collins, R-Maine.

The House is on summer break for campaign season. The Senate is in session, trying to wrap up a rare August work period that GOP leaders had hoped would be invigorating. Instead, senators at the Capitol are finding themselves facing questions they often have no answers for.

“That’s always been an issue: What did the Founders really mean by high crimes and misdemeanors?” said Sen. Ron Johnson, R-Wis. “Right now it’s in the hands of the courts, and we’ll see how it plays out.”

Some Republican strategists are privately worried about the party’s prospects in November because of the scandals. Democrats see a similar opening in what Schumer has called “a cesspool around this president.”

“I think we’re beyond the tip of the iceberg. We’re in the middle of the iceberg right now, given how many people so close to the president are on their way to jail,” said Sen. Chris Murphy, D-Conn.

“My hope is that Republicans don’t retreat into a corner,” he said. “This is a moment where the future of the presidency is at stake. This isn’t about politics or point-scoring, so I’ll take my time to come to a conclusion. But I hope Republicans will also be willing to look at the facts and come to a non-political conclusion that’s best for the country.”