The Latest: Sessions seems to push back against Trump barb 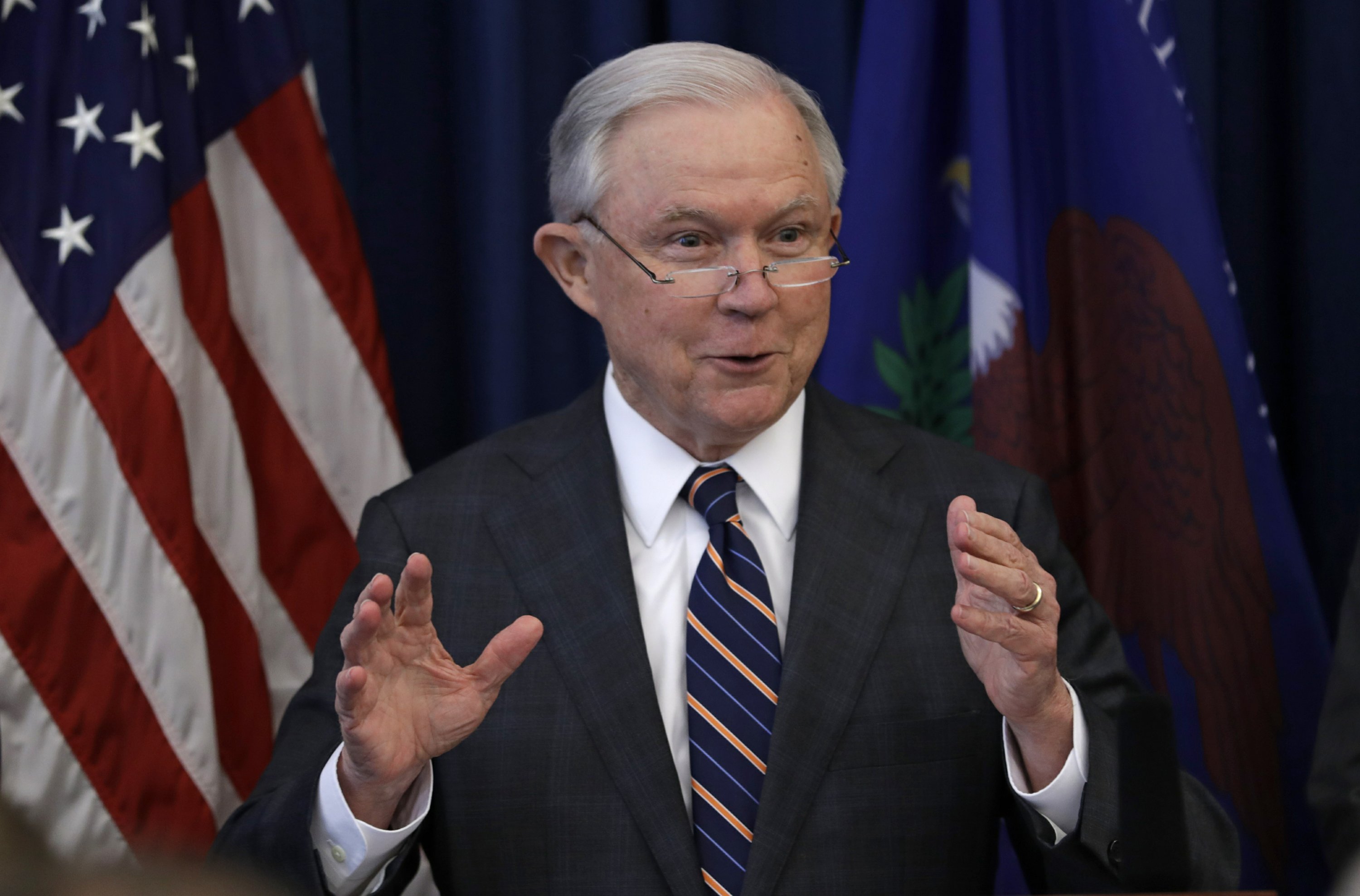 WASHINGTON — The Latest on President Donald Trump (all times local):

His comments — in a statement Thursday — seem to push back against the latest round of criticism by his boss, President Donald Trump, who has repeatedly railed against the department and the FBI.

Trump told “Fox & Friends” in an interview that aired earlier Thursday that Sessions “never took control of the Justice Department and it’s a sort of an incredible thing.”

The president was angered when Sessions stepped aside from overseeing the federal investigation into Russian meddling in the 2016 election. Trump has called the special counsel’s probe a “witch hunt.”

Sessions says there’s no other nation with more talented and dedicated law enforcement investigators and prosecutors. Sessions says he’s “proud of the work we have done in successfully advancing the rule of law.”

The chairman of the Senate Judiciary Committee says his staffers have reached out to Michael Cohen, President Donald Trump’s former lawyer, about what information he might have — and they’re awaiting a response.

GOP Sen. Chuck Grassley of Iowa says no decision has been made about Cohen appearing before the committee.

Cohen pleaded guilty this week in federal court to campaign-finance violations and other charges. He says he and then-candidate Trump arranged the payment of hush money to influence the election.

Committee spokesman Taylor Foy says the committee originally scheduled an interview with Cohen in May. But he withdrew, citing criminal proceedings.

Cohen’s attorney, Lanny Davis, has indicated he may be willing to testify to Congress.

The Senate intelligence committee is also interested in talking to Cohen.

President Donald Trump prizes loyalty, and he says that’s the only reason he made Jeff Sessions attorney general.

Sessions, an Alabama Republican, was the first senator to endorse Trump’s bid for president, and he was rewarded with a spot in Trump’s Cabinet as the nation’s top law enforcement officer.

But Trump was angered when Sessions stepped aside from overseeing the federal investigation into Russian meddling in the 2016 election, and the president has taken issue with his own Justice Department.

Trump tells “Fox & Friends” that Sessions “took the job and then he said, ‘I’m going to recuse myself.’ I said what kind of a man is this?”

Trump says in the interview, “You know, the only reason I gave him the job (was) because I felt loyalty, he was an original supporter.”

Senate Minority Leader Chuck Schumer says it’s time for Republicans to stand up to President Donald Trump after his former personal lawyer implicated him in a crime.

The Democrat says Republicans have become complicit in bringing down the character of the nation. He says they’ve shirked their duty in exchange for a corporate tax cut and stacking the federal courts.

The GOP, he says, is “becoming a co-conspirator in the culture of corruption that surrounds this president.”

He called on GOP leaders to pass legislation to protect special counsel Robert Mueller’s investigation of Russia’s actions in the 2016 elections, to hold hearings on the power of the president to pardon and pass legislation to bolster election security.

Schumer says it is time for Republicans to “speak truth to power.”

President Donald Trump says he believes the economy would tank if he were to be impeached.

Trump was asked in an interview with “Fox & Friends” if he believes Democrats will launch impeachment proceedings if they win the House this fall, as many suspect.

He says, “If I ever got impeached, I think the market would crash. I think everybody would be very poor.”

Trump says Americans would see economic “numbers that you wouldn’t believe in reverse.”

But Trump is also expressing doubt that that would ever happen.

He says, “I don’t know how you can impeach somebody who’s done a great job.”

President Donald Trump is suggesting that it should be illegal for people facing prosecution to cooperate with the government in exchange for a reduced sentence.

Trump is reacting to the guilty plea entered by his former lawyer, Michael Cohen, to a range of charges.

Trump — in an interview with “Fox & Friends” — is accusing Cohen of implicating him to get a better deal with prosecutors. Trump says Cohen “makes a better deal when he uses me.”

Trump claims people who decide to cooperate with the government “make up stories” and “just make up lies.”

Here’s what the president says: “It’s called flipping and it almost ought to be illegal.” He says “it’s not a fair thing.”

President Donald Trump is distancing himself from his former lawyer, Michael Cohen, in the wake of Cohen’s guilty plea to eight charges, including campaign finance violations that Cohen says he carried out in coordination with Trump.

Trump — in an interview with “Fox & Friends” — describes Cohen as a “part-time attorney.” And Trump also suggests that Cohen’s legal trouble stemmed from his other businesses, including involvement with the New York City taxi cab industry.

Trump claims that Cohen decided to offer “lies” about Trump to reduce Cohen’s own legal exposure.

President Donald Trump is digging in to his denials of wrongdoing as his White House struggles to manage the fallout from allegations he orchestrated a campaign cover-up to buy the silence of two women who say they had affairs with him.

And the president is accusing his former lawyer, Michael Cohen, of “making up stories” in order to get a “great deal” from prosecutors.