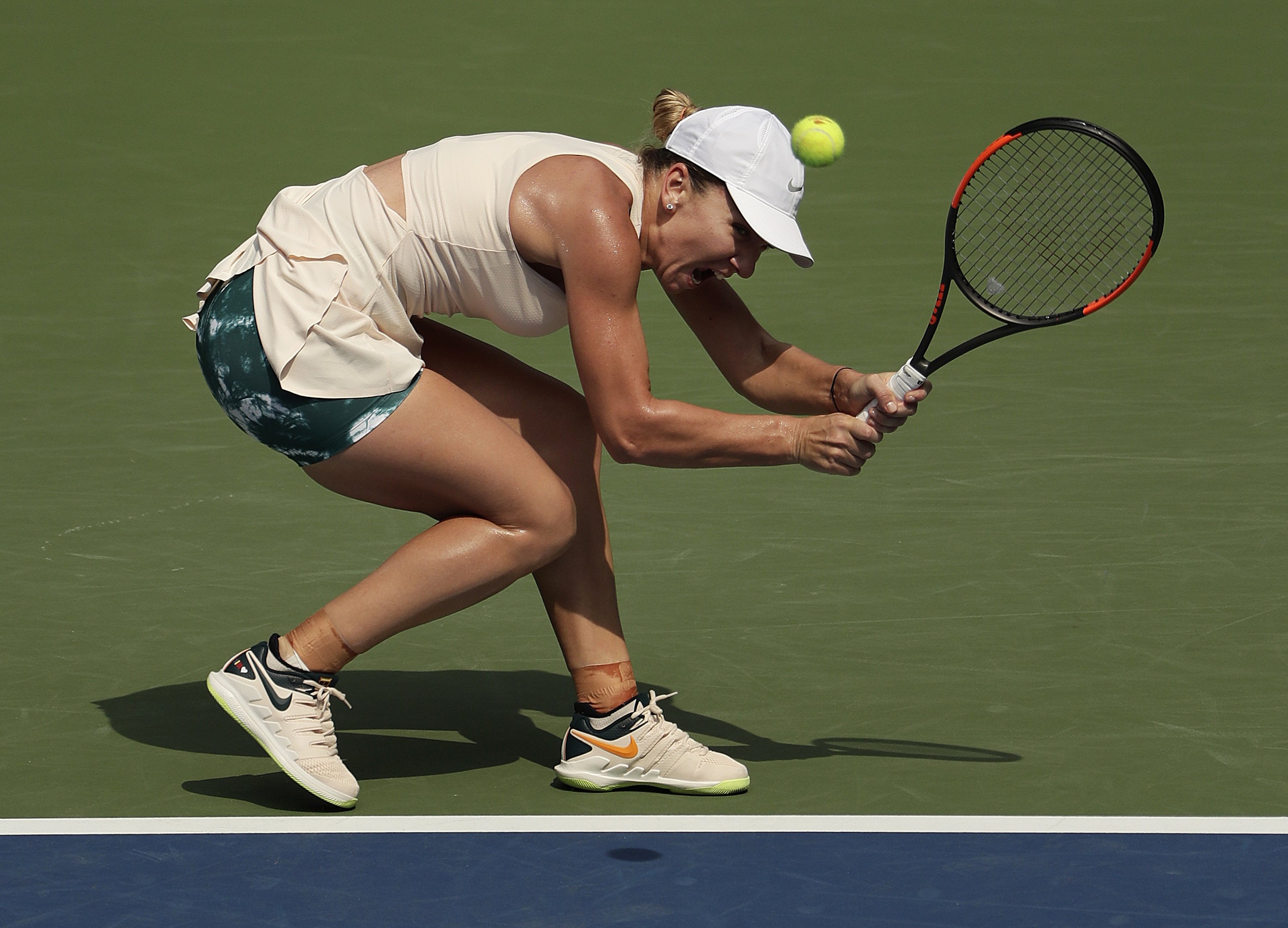 NEW YORK — Some players, like top-ranked Simona Halep, freely acknowledge they don’t deal well with the hustle-and-bustle of the U.S. Open and all it entails.

Others, like 44th-ranked Kaia Kanepi, take to the Big Apple and its Grand Slam tournament.

Put those two types at opposite ends of a court at Flushing Meadows and watch what can happen: Halep made a quick-as-can-be exit Monday, overwhelmed by the power-based game of Kanepi 6-2, 6-4 to become the first No. 1-seeded woman to lose her opening match at the U.S. Open in the half-century of the professional era.

Halep blamed opening-round jitters, and that has been a recurring theme throughout her career. The reigning French Open champion has now lost her first match at 12 of 34 career major appearances, a stunningly high rate for such an accomplished player.

“It’s always about the nerves,” said Halep, who was beaten in the first round in New York by five-time major champion Maria Sharapova in 2017. “Even when you are there in the top, you feel the same nerves. You are human.”

She also offered up an explanation tied to this site.

“Maybe the noise in the crowd. The city is busy. So everything together,” said Halep, who was coming off consecutive runs to the final at hard-court tuneup tournaments at Cincinnati and Montreal. “I’m a quiet person, so maybe I like the smaller places.”

It was the first match at the rebuilt Louis Armstrong Stadium, which now has about 14,000 seats and a retractable roof, and what a way to get things started. That cover was not needed to protect from rain on Day 1 at the year’s last major tournament — although some protection from the bright sun and its 90-degree (33-degree Celsius) heat might have been in order.

“The courts suit my game, and I love being in New York. I like the city,” said Kanepi, who is from Estonia and is sharing a coach this week with another player, Andrea Petkovic. “I like the weather: humid and hot.”

Since professionals were admitted to Grand Slam tournaments in 1968, only five times before Monday did women seeded No. 1 lose their opening match at a major — and never at the U.S. Open. It happened twice to Martina Hingis and once to Steffi Graf at Wimbledon, once to Angelique Kerber at the French Open and once to Virginia Ruzici at the Australian Open.

Halep got off to a slow start at Roland Garros this year, too, dropping her opening set, also by a 6-2 score, but ended up pulling out the victory there and adding six more to lift the trophy.

There would be no such turnaround for her against Kanepi, a big hitter who dictated the points to claim her second career win against a top-ranked player — but first top-20 victory since 2015. Kanepi has shown the occasional ability to grab significant results, including a run to the quarterfinals at Flushing Meadows a year ago.

On this day, Kanepi took charge of baseline exchanges, compiling a 26-9 edge in winners, 14 on her favored forehand side alone. Wearing two strips of athletic tape on her left shoulder, the right-handed Kanepi also had far more unforced errors, 28-9, but that high-risk, high-reward style ultimately paid off.

“I thought, ‘I just have to be aggressive and try to stay calm,'” Kanepi said.

Early in the second set, on the way to falling behind by two breaks at 3-0, Halep slammed her racket twice, drawing a warning for a code violation from the chair umpire.

Eventually, Halep got going a bit, taking advantage of Kanepi’s mistakes to break back twice and get to 4-all in that set, getting a lot of support from fans who repeatedly chanted her first name.

“I was thinking about that: Why (did) they cheer so much for her? Because normally, they cheer for the underdog,” Kanepi said with a smile. “It was a bit annoying for some time, but I got over it.”

Sure did. She ended a 14-stroke exchange with a cross-court forehand volley winner to break right back for a 5-4 lead, then served out the victory.

In other early results, three men’s seeds were bounced, too: No. 8 Grigor Dimitrov lost to three-time major champion Stan Wawrinka in the first round for a second consecutive major, No. 16 Kyle Edmund was beaten by Paolo Lorenzi, and No. 19 Roberto Bautista Agut of Spain was swept by Jason Kubler. Winners included a pair of Americans, No. 18 Jack Sock, who had lost eight consecutive matches including one in qualifying, and No. 11 John Isner.

Halep — who could have faced Serena or Venus Williams in the fourth round — was joined on the way out of the women’s draw by No. 31 Magdalena Rybarikova, while No. 7 Elina Svitolina and two-time major champion Garbine Muguruza advanced.