In familiar dance, Turkey warms to Russia as US ties unravel 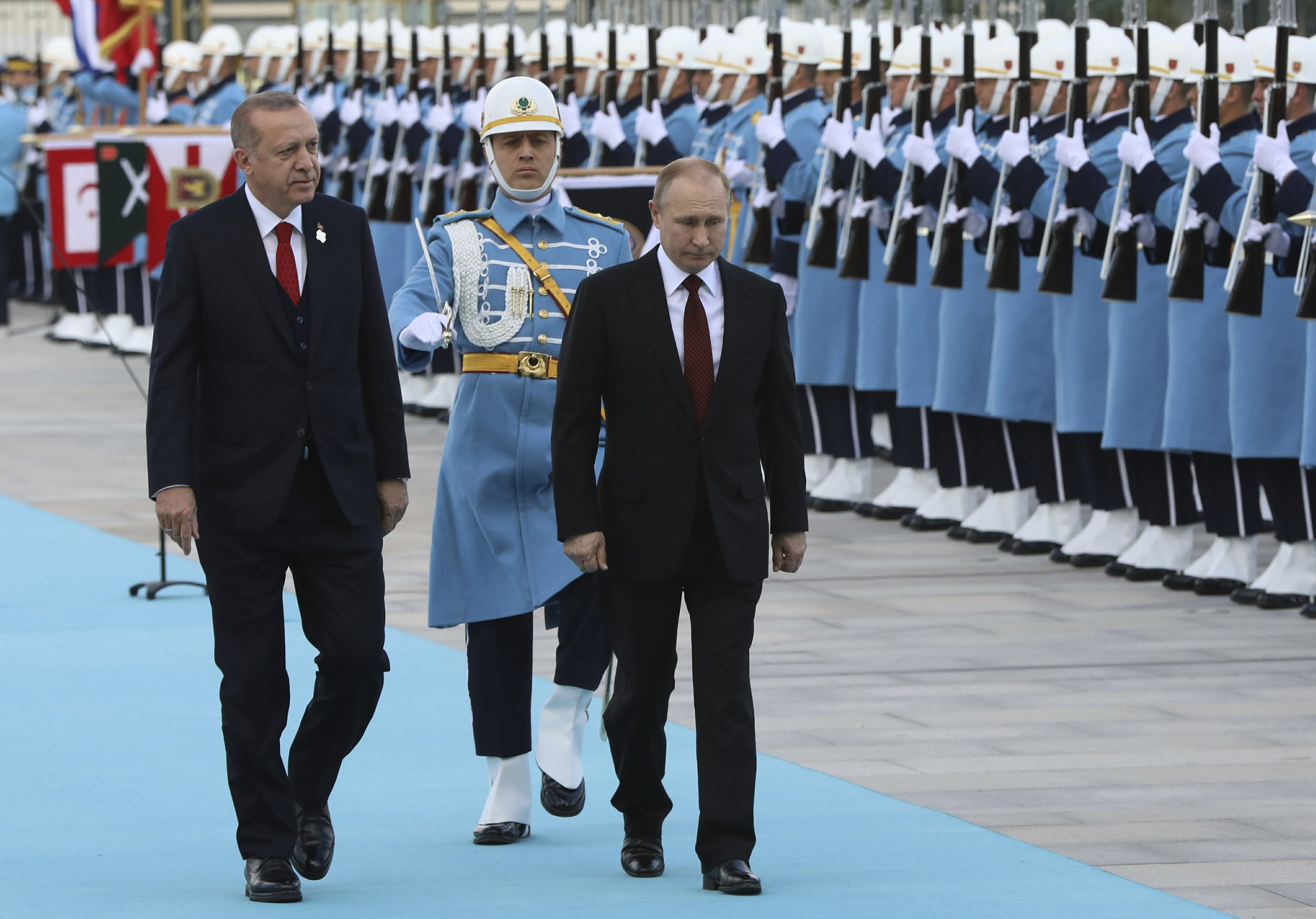 ISTANBUL — Relations between Turkey and Russia are cozy, prompting worries in the West of a potentially critical rift in the NATO alliance. But Turkey’s president may be engaged in a balancing act, tactically turning to Russia as ties with the United States further deteriorate over the detention of an American pastor.

President Donald Trump tweeted this month that U.S.-Turkey relations “are not good at this time!” and announced tariff hikes on the NATO ally, precipitating a nosedive in the Turkish currency. Turkish President Recep Tayyip Erdogan was on the phone with Russia’s Vladimir Putin that same afternoon, when they promised more cooperation in the areas of defense, energy and trade.

Switching partners is becoming a familiar dance for Turkey, which is strategically situated between Asia and Europe and often caught in the geopolitical push and pull of the turbulent Mideast region. Despite his country’s economic vulnerability, Erdogan seemed to be signaling that it had alternatives to the traditional alliances that date from its Cold War role as a regional bulwark against Soviet power.

In Turkey’s view, “the U.S. has become even more threatening than Russia” due to strains over critical issues, Sener Akturk, an associate professor of international relations at Koc University in Istanbul, said. The perceived threat makes the U.S. “an ally that has to be paradoxically kept at arm’s length and even balanced against with Russian cooperation.”

Points of contention between the U.S. and Turkey include American military support for Kurdish fighters in Syria who are considered terrorists by Turkey; Turkish appeals to the U.S. to extradite Fethullah Gulen, a Muslim cleric Turkey accuses of plotting a failed 2016 coup; and American pastor Andrew Brunson, who is being prosecuted in Turkey on terror-related charges.

A lever in Turkey’s diplomatic maneuvering is its pledge to buy a Russian S-400 surface-to-air missile defense system, with deliveries starting next year. U.S. and NATO officials say the Russian system conflicts with NATO equipment and would lead to security breaches.

Trump signed a defense bill this month that would delay delivery of F-35 fighter jets to Turkey. Separately, the U.S. president has criticized NATO allies, saying they should pay more for their defense and rely less on American support.

Koc University’s Akturk said the missile deal with Russia makes sense since Western allies have sometimes suspended military deals with Turkey because of political disputes and concerns about the country’s human rights record.

Meanwhile, Russia and Turkey have come a long way in restoring their rapport since the Turkish military shot down a Russian military jet in 2015 along the Turkish-Syrian border.

Erdogan and Putin have met at least 11 times since August 2016. Outgrowths of the frequent contact between the two regional powers include the resumption of a deal for a natural gas pipeline through Turkey and Russian plans to build a nuclear power plant in Turkey.

The rapprochement “demonstrates a striking level of pragmatism in this relationship,” Anna Arutunyan, a Moscow-based senior analyst for the International Crisis Group, said.

Russia, along with Iran, supports Syrian President Bashar Assad in his country’s long war. Turkey backs some groups fighting Assad. Despite their support for opposing sides, the two countries are working together.

Turkey has dropped its insistence on the immediate departure of the Syrian president, while Russia has allowed Turkey to conduct cross-border operations against Kurdish militants in Syria. Turkey has also asked Russia to restrain Assad from launching an all-out offensive against the last major rebel stronghold in Idlib province, on the border with Turkey.

“Russia and Turkey, within the Syrian context, need each other, and the relationship is far more robust,” said Aaron Stein, a senior fellow at the U.S.-based Atlantic Council. But he thinks Russia holds the upper hand, using the reconciliation to have Turkey bring the rebels under regime control.

Even if Putin and Erdogan find accommodation in Syria, their interests diverge further north in the Black Sea, a theater for conflicts since Russian and Ottoman imperial days. Russia’s war with Georgia a decade ago, its 2014 annexation of Crimea and ongoing military intervention in Ukraine have challenged Turkish influence and position in the Black Sea.

Russia’s moves prompted Erdogan to warn NATO in 2016 that the Black Sea, dubbed the “Turkish lake” under the Ottomans, was turning into a “Russian lake.” NATO now maintains a “tailored forward presence” with increased land, air and naval capabilities.

“Russia’s expansion makes the NATO alliance more and more significant for Turkey in the Black Sea,” the Crisis Group said in a June report, noting that Ankara has reversed a decades-long policy of keeping the Western military alliance out of the region.

Turkey’s position on the Black Sea points to what Akturk described as co-existing “a la carte alliances,” in which the Turkish government moves between Russia and the West depending on what’s at stake.

That makes it hard to know if Turkey’s pivot toward Moscow will last in a region of shifting allegiances and periodic crises. But it’s a remarkable turnaround in the three years since Putin described the downing of the Russian jet as a “stab in the back.”