McCain on his time as POW: ‘I fell in love with my country’ 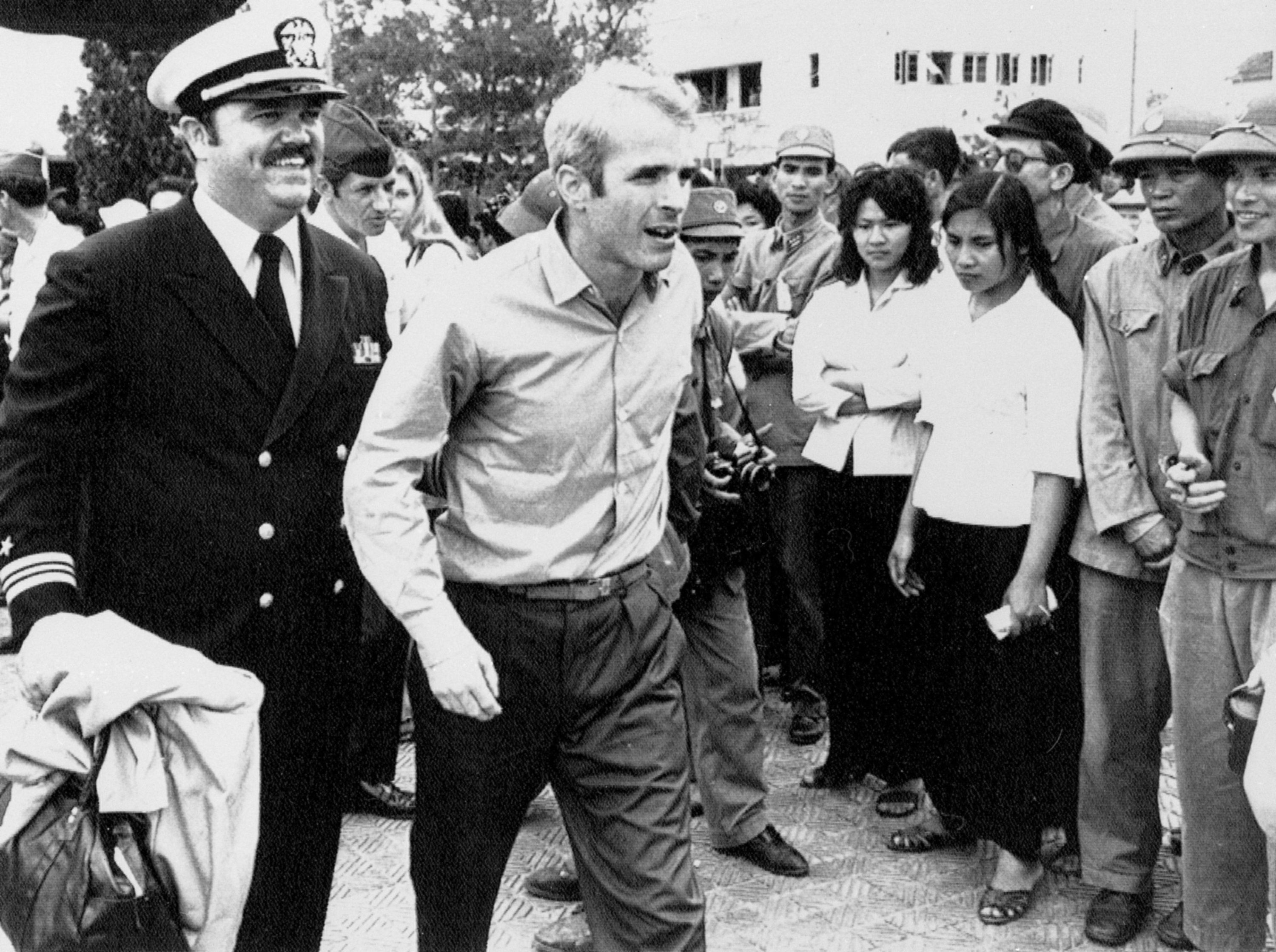 DENVER — On Oct. 26, 1967, a missile the size of a telephone pole blew the wing off of John McCain’s Skyhawk dive bomber.

McCain, then a 31-year-old lieutenant commander in the Navy, parachuted out of the plane and landed in a lake in Hanoi, North Vietnam. He broke both arms and a leg in the fall, was dragged from the lake by an angry crowd, and was beaten and bayoneted.

Thus began a harrowing, five-year ordeal that was to define the future senator and presidential candidate’s life.

Before his imprisonment in Vietnam, McCain was Navy royalty — the grandson and son of four-star admirals — as well as a self-described lousy student at the Navy Academy and a hotshot pilot who had survived three accidental crashes. His time in captivity gave his life purpose.

“I have never felt more powerfully free, more my own man, than when I was a small part of an organized resistance to the power that imprisoned me,” McCain wrote in his 1997 memoir, “Faith of My Fathers.” ”Nothing in life is more liberating than to fight for a cause larger than yourself.”

When McCain was shot down, his father was poised to assume command over the entire Pacific theater. Once McCain gave his captors his name, rank and serial number they realized they had a potential propaganda coup on their hands.

McCain was taken to the hospital for some basic treatment — his left arm was left broken, to heal on its own. His captors filmed him there for propaganda purposes and McCain later found out the North Vietnamese had crowed: “We have the crown prince.”

After six weeks in the hospital, McCain, who had lost about one-third of his weight, was transferred to a prison cell. After a brief time with cellmates, McCain began two years in solitary confinement in a 10-by-10 room.

“The most important thing for survival is communication with someone,” McCain wrote in a 1973 memoir of his captivity. He developed a code so he could communicate with the man in his neighboring cell, who broke down crying when he tapped out his name to McCain.

In the midst of this deprivation, McCain’s captors asked him if he wanted to go home. It was a trick question. The U.S. military’s code of conduct required prisoners to be released in the order they were detained. The North Vietnamese wanted to make a show of releasing McCain early, as his father assumed command over the Pacific. McCain refused.

“That was character, what you do when people are not watching,” said Col. Bud Day, who was imprisoned with McCain. “To have gone home at that time would have been absolutely the wrong thing and he had no intention of dishonoring himself.”

Instead, McCain was in for the worst bout of torture yet.

For four days after he refused release, McCain was beaten every two hours to three hours by 10 guards. Filled with thoughts of suicide, McCain broke and agreed to sign an anti-U.S. propaganda statement confessing to “black crimes.” He later wrote: “I had learned what we all learned over there: Every man has his breaking point. I had reached mine.”

It was the last time McCain would break. He refused to sign any other statements or meet with visiting American anti-war activists.

Eventually, McCain was removed from solitary confinement and mingled with other U.S. prisoners of war. McCain helped them fight boredom by re-enacting classic movies and taking part in discussions of the history of the English-language novel, going back to the 18th century. “We only had half the facts right, but John said nobody knew the difference,” recalled Orson Swindle, a fellow prisoner. “We were just starved.’

In December of 1972, McCain and his fellow prisoners cheered as American bombs fell around the prison complex where he was held — the “Hanoi Hilton” — during the Christmas bombing that marked an escalation of the U.S. offensive. They might die in the attack, but the prisoners figured it was the best chance of subduing the Vietnamese and getting home.

On March 14, 1973, it was finally McCain’s turn to be released. He was bused to a nearby airport and escorted onto an American plane. “There is no way I can describe how I felt as I walked toward that U. S. Air Force plane,” McCain wrote.

For the rest of his life, McCain would be unable to lift both his arms over his head because of the injuries he suffered during his captivity in Vietnam. But he gained something, too. “In prison, I fell in love with my country,” he wrote.

“I had loved her before then, but like most young people, my affection was little more than a simple appreciation for the comforts and privileges most Americans took for granted. It wasn’t until I had lost America for a time that I realized how much I loved her.”