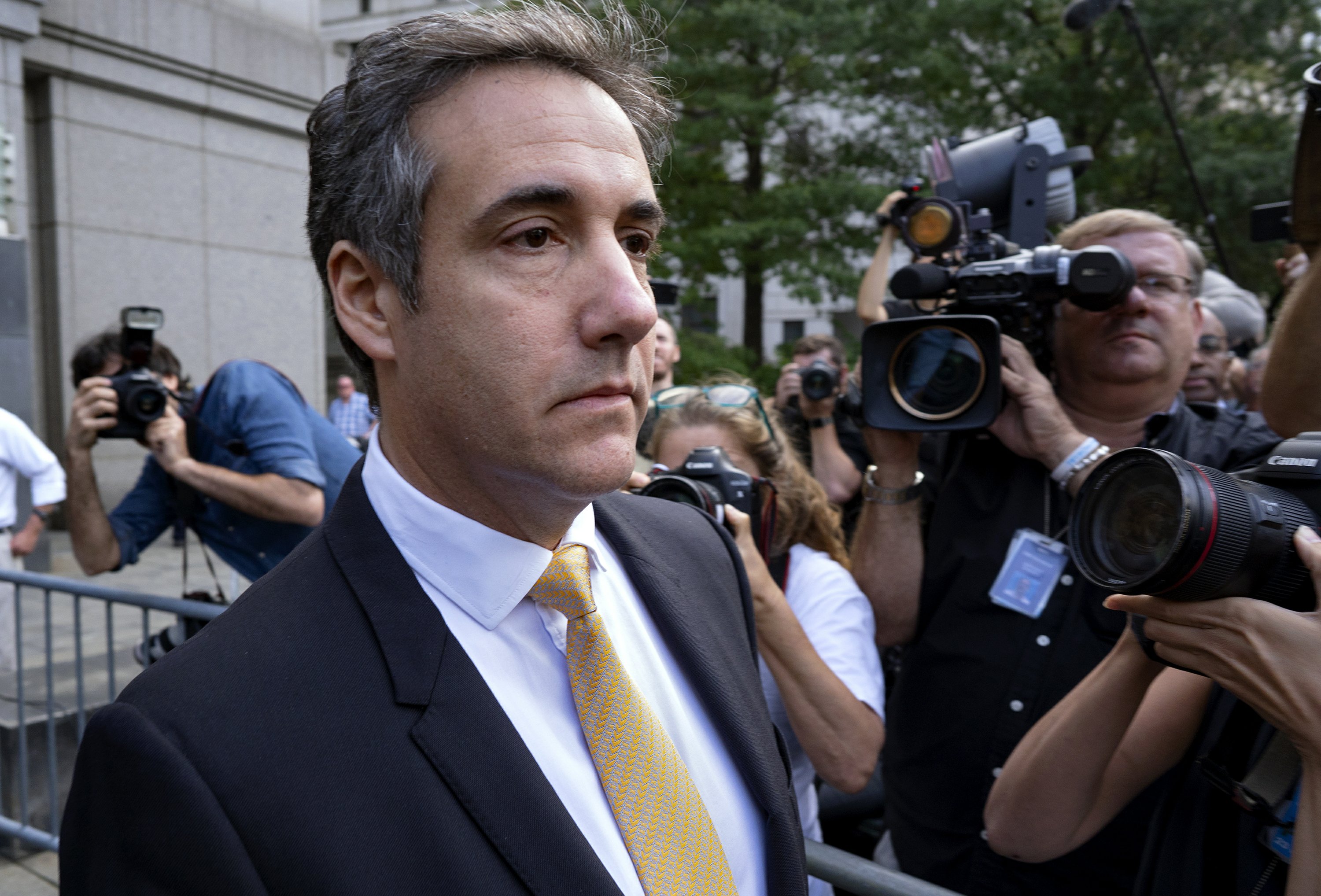 NEW YORK — Mired in financial woes, Michael Cohen is sticking his hand out and asking the public for help paying for his legal defense, and one anonymous donor already has ponied up $50,000.

Through his lawyer, Donald Trump’s former “fixer” says collecting contributions through a GoFundMe page set up after his guilty plea this week is the only way to ensure the truth comes out about the president.

It’s also the latest sign that Cohen is broke.

Trump’s former personal lawyer owes at least $1.4 million to the IRS after pleading guilty Tuesday to tax evasion, campaign finance violations and bank fraud, and has racked up millions of dollars in debt. Because of his plea, he’s being forced to give up his New York City taxi medallions, which have shrunk in value as Uber and Lyft shake up the industry.

“He’s without resources and owes a lot of money,” Cohen’s lawyer, Lanny Davis, said in a battery of television interviews on Wednesday.

While Trump denies the affairs, his account of his knowledge of the payments has shifted. In April, Trump denied he knew anything about the Daniels payment. He told Fox News in an interview aired Thursday that he knew about payments “later on.”

By Thursday afternoon, the GoFundMe page dubbed the “Michael Cohen Truth Fund” had raised more than $145,000 from about 2,600 donations. Most reaction on social media was incredulous and unsympathetic, but one $5 donor was encouraging, writing: “The USA would love you for your honesty.”

Confusion over the web address for the fundraising page, michaelcohentruthfund.com , led someone on Wednesday to anonymously register a shorter version, michaelcohentruth.com , that redirects to Trump’s re-election campaign website.

Cohen’s crowdfunding campaign, which has a goal of raising $500,000, could be a way for Cohen to bolster his whistleblower status by appealing to Democrats and others who want to see Trump taken down.

It’s not the first time someone who felt wronged by Trump has asked the public to pony up. Fired former FBI deputy director Andrew McCabe raked in more than $500,000 in just five days of his legal defense campaign, and Daniels funded her lawsuit against the president with about $500,000 raised from nearly 17,000 donors.

Cohen could ultimately need much more to wipe his books clean.

Court papers filed in connection with Cohen’s guilty plea detailed his precarious financial state, as well as his side gigs as a taxicab magnate, high-interest lender and broker of real estate and handbag deals.

In one arrangement, according to the papers, Cohen used a line of credit he obtained at 5 percent interest to float a $6 million loan to a Chicago taxi operator at 12 percent interest.

Later, when applying for the $500,000 home equity credit line used to finance the Daniels payment, the papers say Cohen failed to disclose $14 million in medallion-related debt. Cohen and his wife claimed on the loan paperwork that they had a positive net worth of more than $40 million.

In April, transaction records show, Cohen put up his multimillion-dollar Trump Park Avenue home — valued at $9 million — as collateral on some of his taxi-related loans.

The value of medallions, the physical plates affixed to cabs that owners are required to display, have dropped precipitously in recent years from highs of over $1 million apiece in New York just a few years ago to nearly a quarter of that amount today.

Cohen has been involved in the gritty New York City yellow cab industry since the 1990s. He’s owned about 30 medallions with his wife and father-in-law, as well as a fleet of 22 cabs in Chicago, records show. Some of them are held through companies with names such as Love Bug Cab Corp. and Tailgater Cab Corp.

Davis, who is listed as the creator of Cohen’s fundraising page, told The Associated Press last month that Cohen was footing the bill for his defense after pivoting from loyalty to Trump to looking out for himself, but was “thinking of trying to get some help.”

A description on the GoFundMe page describes it as a “transparent trust account, with all donations going to help Michael Cohen and his family” as he goes forward with telling the truth about Trump.

Loyola Law School professor Jessica Levinson said crowdfunding campaigns raise ethical concerns because they allow people to contribute to a political cause similarly to a campaign contribution, but without the same transparency and regulation.

“Who does the lawyer and client feel grateful to?” Levinson said. “Right now, there is no clear way of finding out.”

GoFundMe no longer allows fundraisers to download a list of donor’s information such as email addresses, citing new data protection regulations. Fundraisers can communicate with donors through the GoFundMe site. And although there is an option to make donations appear anonymously on the public-facing part of the website, it appears that the fundraiser can still view the name of these donors.

GoFundMe did not immediately reply to a request for comment.

Robert Rizzi, a lawyer specializing in tax and government ethics, said the law is unclear whether Cohen would have to pay taxes on the fundraising proceeds. Taxes would apply if the money counts as income, but not if it’s a gift — but gifts must be given “out of detached and disinterested generosity,” Rizzi said.

“There would be an irony in being taxed on money he raised to defend himself for tax evasion,” Rizzi said.