Pope hears the wounds of Ireland’s abused, and vows to speak 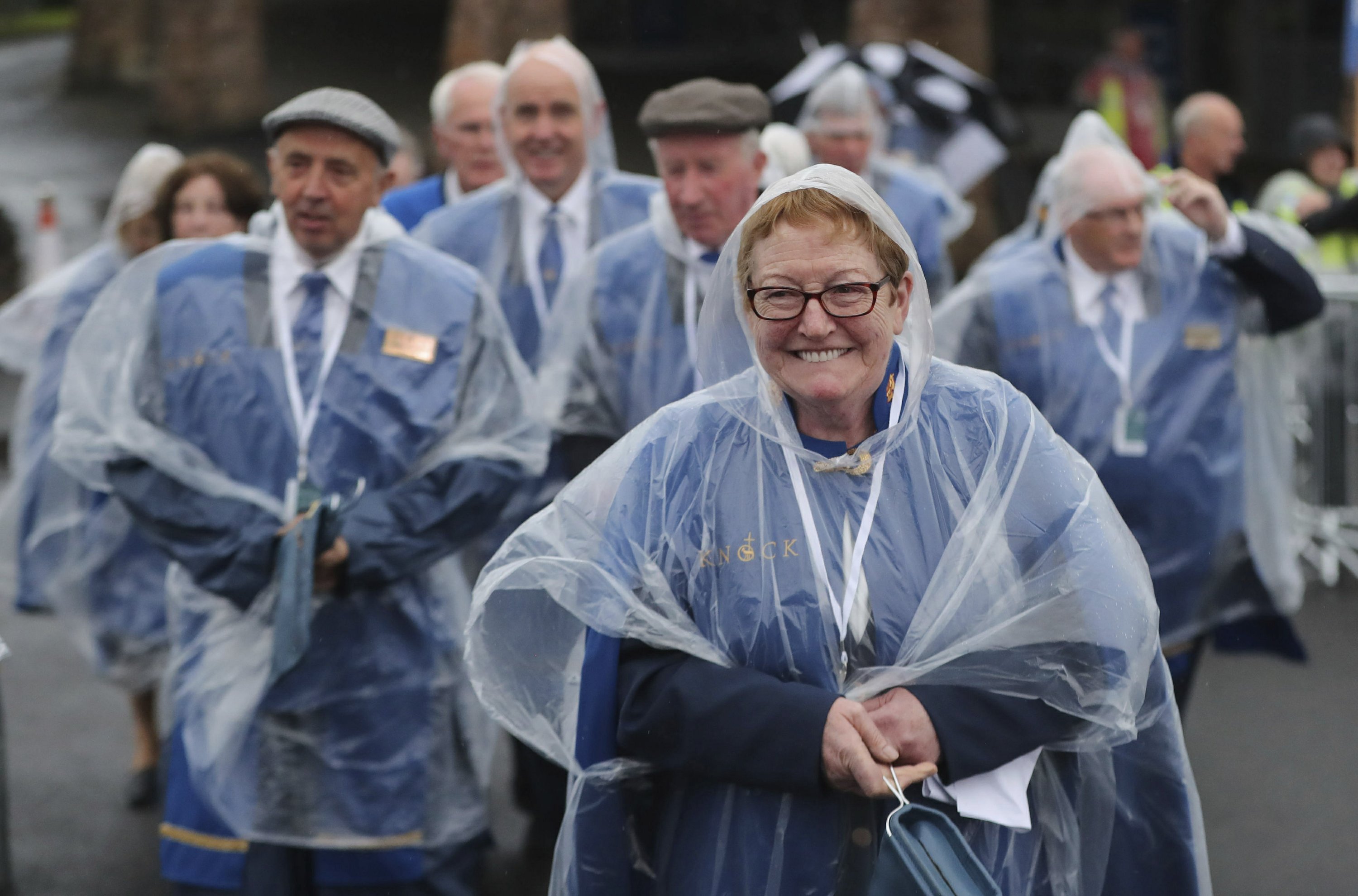 KNOCK, Ireland — Pope Francis visited a famous shrine Sunday in Ireland and was to celebrate a Mass dedicated to families after an emotional meeting with Irish victims of clerical sex abuse and those wrenched away from their mothers in forced adoptions demanded by Catholic authorities.

Francis arrived Sunday in Knock, the Marian shrine in northwestern Ireland, where he prayed and blessed thousands of jubilant Irish faithful, who gathered in raincoats under clouds.

On Saturday, the first day of his visit, Francis spent 90 minutes meeting with victims of clerical and institutional abuse, including two people who were forcibly given up for adoption as newborns because their mothers weren’t married. They are some of the thousands of Irish children taken from their mothers who were then forced to go live and work in laundries and other workhouses for “fallen women.”

One of them, Clodagh Malone, said Francis was “shocked” at what they told him and “he listened to each and every one of us with respect and compassion.”

The survivors asked Francis to speak out Sunday to let all the mothers know that they did nothing wrong and that it wasn’t a sin — as church officials have told them — to try to find their children later in life.

They said the Argentine pope understood well their plight, given Argentina’s own history of forced adoptions of children born to purported leftists during its 1970s military dictatorship.

“That is a big step forward for a lot of elderly women, particularly in the countryside in Ireland who have lived 30, 40, 50, 60 years in fear,” another adoptee, Paul Redmond, told The Associated Press. “That would mean a lot to them.”

Francis’ first day in Ireland was dominated by the abuse scandal and Ireland’s fraught history of atrocities committed in the name of preserving and purifying the Catholic faith. He received a lukewarm reception on the streets, but tens of thousands of people thronged Dublin’s Croke Park Stadium for a family rally featuring Ireland’s famous Riverdance performers and tenor Andrea Boccelli.

Francis’ visit had originally been intended to celebrate Catholic families at the close of the Vatican’s once-every-three-years World Meeting of Families. But it has been overshadowed by the abuse scandal, which has devastated the church’s reputation in Ireland since the 1990s and has exploded anew in the U.S. following accusations of misconduct and cover-up by members of the U.S. hierarchy.

The U.S. scandal took on a new twist Sunday, with a former Vatican ambassador to the U.S. purportedly penning a letter accusing Vatican officials of knowing about the sexual escapades of ex-Cardinal Theodore McCarrick since 2000, but making him a cardinal anyway. The letter attributed to Archbishop Carlo Maria Vigano was published Sunday by two conservative outlets, the National Catholic Reporter and LifeSiteNews.

Francis accepted McCarrick’s resignation as cardinal last month after a U.S. church investigation determined an accusation he molested a minor was “credible.” But in the letter, Vigano said McCarrick had been initially sanctioned by the Vatican in 2009 or 2010 but that Francis rehabilitated him in 2013 despite being informed of McCarrick’s penchant to invite young seminarians into his bed.

The Vatican didn’t immediately comment or say if the letter was authentic.

Upon arriving in Ireland, Francis sought to respond to the outcry over the U.S. and global sex abuse and cover-up scandal during a speech to Irish government authorities at Dublin Castle.

“The failure of ecclesiastical authorities — bishops, religious superiors, priests and others — to adequately address these repugnant crimes has rightly given rise to outrage, and remains a source of pain and shame for the Catholic community,” he told them. “I myself share these sentiments.”

But neither his words nor the meeting with victims assuaged demands for heads to roll over the abuse scandal.

Colm O’Gorman, who is leading a solidarity rally Sunday in Dublin for abuse victims, said Francis’ remarks about sharing the shame felt by Catholics were an “insult to faithful Catholics, who have no reason to feel shame because of the crimes of the Vatican and the institutional church.”

Separately, survivors of one of Ireland’s wretched mother and baby homes were to hold their own demonstration Sunday. The location is Tuam, site of a mass grave of hundreds of babies who died at a church-run home.

Francis is nearby, at Knock, but had no plans to visit the site. He did, however, hear about Tuam on Saturday from Ireland’s minister for children, Katherine Zappone. Their conversation wasn’t released but Francis said her words “still echo in my ears.”

Deeply Catholic Ireland has had one of the world’s worst records of clergy sex abuse and the ill-treatment of women and children. Government-mandated inquiries concluded that thousands of children were raped or molested by priests or physically abused in church-run schools — and Irish bishops worked for years to hide those crimes.