The Latest: Match between 2 Canadian teens at Open fizzles 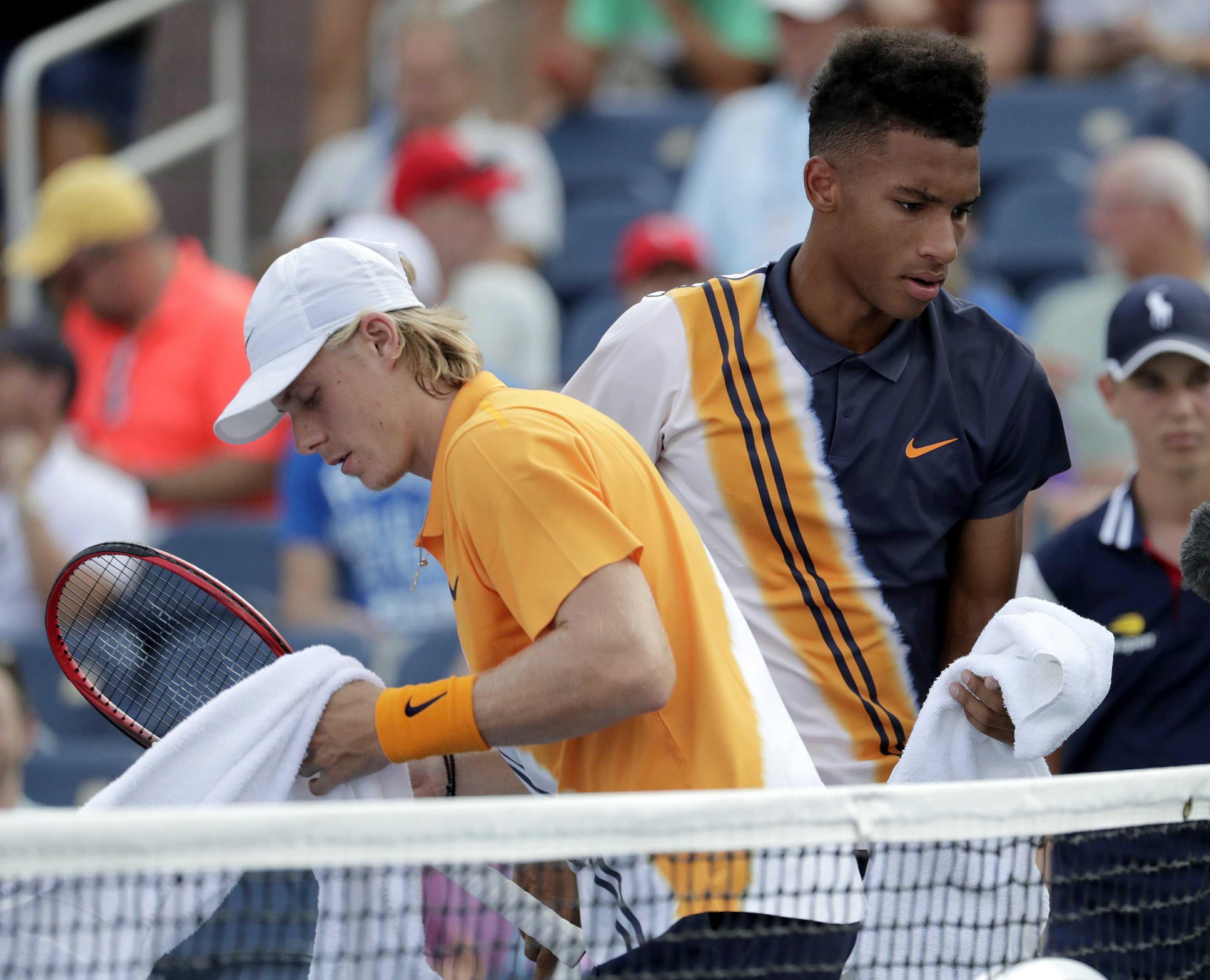 NEW YORK — The Latest on the U.S. Open tennis tournament (all times local):

No. 28 seed Denis Shapovalov moved into the second round when his good friend and opponent, Felix Auger-Aliassime, stopped playing in the match between two Canadian teens because he did not feel well.

Shapovalov was leading 7-5, 5-7, 4-1 when Auger-Aliassime retired. Auger-Aliassime already had been visited by a doctor during a changeover in the third set and said his heart was racing.

Shapovalov is 19, making him the youngest player in the ATP top 100.

Auger-Aliassime just turned 18 on Aug. 8, making him youngest player in the ATP top 200.

Their combined age made this the youngest U.S. Open men’s match since 2006, when Novak Djokovic, 19, beat Donald Young, 17.

Venus Williams moved to the second round by beating Svetlana Kuznetsova 6-3, 5-7, 6-3 in a matchup of past U.S. Open champions.

Williams, the No. 16 seed and a semifinalist last year at Flushing Meadows, could play younger sister Serena in the third round. That would be their earliest Grand Slam matchup in 20 years.

Venus Williams won the 2000 and ’01 U.S. Open championships but struggled in the majors this year, falling in the first round of the Australian Open and French Open. She reached the third round at Wimbledon, which she has won five times.

Kuznetsova won the 2004 U.S. Open and was granted a wild card to this year’s tournament. She also won the 2009 French Open.

Defending champion Sloane Stephens is into the second round of the U.S. Open.

Stephens, the No. 3 seed, defeated Evgeniya Rodina of Russia 6-1, 7-5 in the rebuilt Louis Armstrong Stadium.

The 2012 U.S. Open champion from Britain has sat out much of the last year because of hip surgery. He hadn’t appeared in a major since Wimbledon in 2017.

Murray is just 5-3 this season. The former No. 1 player is currently No. 382 in the world, using a protected ranking to enter the tournament. Murray, who said he didn’t think it was realistic that he could win the title, could play 2009 U.S. Open champion Juan Martin del Potro in the third round.

Kyle Edmund and Roberto Bautista Agut have been upset at the U.S. Open, knocking three seeded men out on the first day of action.

Edmund, the No. 16 seed from Britain, was ousted by Paolo Lorenzi of Italy, 4-6, 6-4, 7-5, 6-1 for a disappointing end to the Grand Slam season after a strong start. He made his deepest run in a major when he reached the Australian Open semifinals in January.

The No. 19 seed, Bautista Agut was swept by Australian Jason Kubler, 6-3, 6-3, 6-4. The Spaniard has grappled with injuries during the season half of the year.

No. 8 Gregor Dimitrov was the highest-seeded man to lose, falling to Stan Wawrinka.

Wawrinka also ousted the Bulgarian in the first round at Wimbledon.

He easily won the first two sets, then rallied to take the third after receiving treatment on his legs early in the set.

Jack Sock is finally back in the singles win column.

The No. 18-seeded American snapped a seven-match losing streak in singles matches on tour with a 6-0, 7-6 (4), 6-2 victory over Guido Andreozzi of Argentina in the first round of the U.S. Open.

It was Sock’s first victory in singles since beating David Ferrer in Rome in May. He is just 6-15 this year after finishing 2017 with a career-best ranking of No. 8.

It’s been a much better year in doubles, where Sock is 26-10 with four titles, including the Wimbledon championship alongside partner Mike Bryan.

Simona Halep has become the first No. 1-seeded woman to lose in first round of the U.S. Open in the professional era.

Halep was beaten 6-2, 6-4 by 44th-ranked Kaia Kanepi of Estonia on Monday in a match that was stunningly lopsided and lasted all of 76 minutes.

It was the first match at the rebuilt Louis Armstrong Stadium.

Halep won the French Open in June for her first Grand Slam title.

But this is the second year in a row she exits the U.S. Open in the first round.

Top-ranked Simona Halep is off to another slow start at a Grand Slam tournament. She can only hope things turn out as well at the U.S. Open as they did at the French Open.

Playing in the first match at the rebuilt Louis Armstrong Stadium, Halep dropped her opening set against No. 44 Kaia Kanepi of Estonia 6-2 in 28 minutes.

At Roland Garros in late May, Halep ceded the opening set of her first-round match by that same score against 83rd-ranked Alison Riske, before coming back to win that match 2-6, 6-1, 6-1 before eventually claiming her first major championship.

Halep lost in the first round at last year’s U.S. Open to 2006 champion Maria Sharapova.

A long list of returns highlights Day 1 at the U.S. Open as the year’s last Grand Slam tennis tournament gets started.

In addition, defending champions Rafael Nadal and Sloane Stephens are slated to play.

Williams will face Magda Linette in Arthur Ashe Stadium to start the night session, followed by Nadal against David Ferrer in a rematch of the 2013 French Open final.

No. 1-ranked Simona Halep takes on Kaia Kanepi in the first match ever played in the reconstructed Louis Armstrong Stadium, which now features a retractable roof.