The Latest: Pope: parents of gay kids shouldn’t condemn them 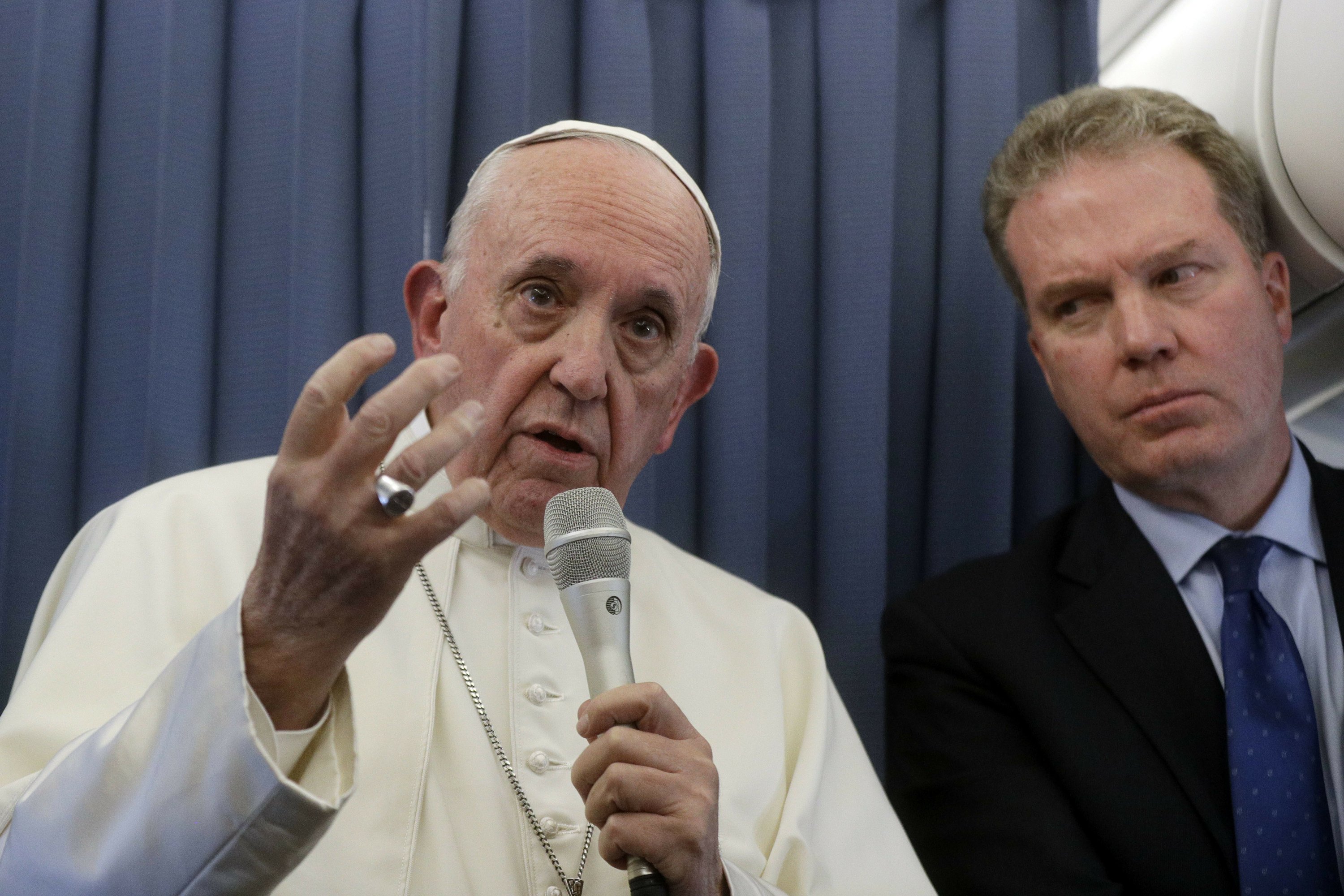 KNOCK, Ireland — The Latest on Pope Francis’ trip to Ireland (all times local):

Pope Francis says parents of gay children shouldn’t condemn them, ignore their orientation or throw them out of the house. Rather, he says they should pray, talk and try to understand.

Speaking to reporters after closing out a Catholic family rally in Ireland, Francis said: “There have always been gay people and people with homosexual tendencies.”

Francis was asked what he would tell a father of a child who just came out as gay. Francis said he would first suggest prayer.

“Don’t condemn. Dialogue. Understand, give the child space so he or she can express themselves.”

Francis said it might be necessary seek psychiatric help if a child begins to exhibit “worrisome” traits, but that it’s something else if an adult comes out as gay.

He urged parents not to respond with silence. “Ignoring child with this tendency shows a lack of motherhood and fatherhood.”

He said: “This child has the right to a family. And the family not throwing him out.”

Pope Francis is defending his procedures to hold bishops accountable for covering up priestly sex abuse, saying a tribunal isn’t necessary and that his ad-hoc approach works better.

Francis was asked en route home from Ireland on Sunday about demands from abuse survivors to implement his 2015 decision to create a tribunal section inside the Vatican to judge negligent bishops.

Francis scrapped the idea in 2016 and instead laid out legal procedures to use the existing Vatican bureaucracy to investigate complaints, and then for a college of legal experts to weigh in and advise the pope.

Francis said a full-fledged tribunal “wasn’t viable or convenient because of the different cultures of the bishops who must be judged.” Instead, he said the ad-hoc jury system “works better” and that “several” bishops had already been judged.

Pope Francis has declined to confirm or deny claims by the Vatican’s retired U.S. ambassador that he briefed the pope in 2013 about sexual misconduct allegations against disgraced ex-Cardinal Theodore McCarrick.

Francis said the 11-page text by Archbishop Carlo Maria Vigano, which reads as a homophobic manifesto and attack on Francis allies in parts, “speaks for itself” and that he wouldn’t comment on it.

Francis said he had read Vigano’s document and trusted journalists to judge for themselves and said: “I won’t say a word about it.”

A man who was born at a Catholic-run orphanage and home for unmarried mothers in Ireland says his mother spent 45 years living at the infamous Magdalene Laundries and that he didn’t know until recent years that he had a sister.

Peter Mulryan was among the hundreds of demonstrators who held a vigil Sunday to remember an estimated 800 babies and young children who died at the Bon Secours Mother and Baby Home and were buried in a mass grave near a sewage system that only was discovered last year.

Mulryan said he lived at the orphanage for four years and “100 hundred meters away from here is the graveyard, and these babies were put in a septic tank.”

Annette McKay, who organized Sunday’s march in the town of Tuam, said: “To my sister Mary Margaret who lies in that septic tank – I am coming for you. You are not going to stay there.”

The demonstrators were hoping to draw attention to the plight of the Tuam babies as Pope Francis visited a shrine town Sunday.

Hundreds of people have marched through the town of Tuam, Ireland, reading aloud the names of an estimated 800 babies who died at a Catholic Church-run orphanage and were buried in a mass grave near a sewage area on the grounds.

The somber protesters read out: “Elizabeth Murphy, 4 months. Annie Tyne, 3 months. John Joseph Murphy, 10 months” and on and on.

They lit candles and placed hundreds of pairs of tiny shoes around a tiny white coffin to honor the babies.

The demonstration took place near the Marian shrine at Knock, which Pope Francis visited earlier Sunday. The demonstrators were hoping to draw attention to the plight of the Tuam babies, who were exiled to the home because they were born to unwed mothers.

An amateur Irish historian, Catherine Corless, researched the deaths of some 800 children at the Bon Secours home. Last year, a government-mandated survey of the grounds determined there was a mass grave at the site.

Corless said of the Tuam protest: “This is much more moving than watching the pope deliver prepared speeches.”

Pope Francis has denounced how Irish children were “robbed of their innocence and taken from their mothers” by Catholic Church-run institutions that put them up for adoption for the shame of having been born to unwed mothers.

Francis spoke out about Ireland’s haunting history of forced adoptions during a prayer Sunday in Knock, the country’s main shrine dedicated to Christ’s mother, Mary.

He did so after meeting Saturday with some of the adoptees, who urged him to denounce the practice, demand an apology from the religious sisters responsible and assure the mothers they could search now for their lost children without fear of sin.

Francis prayed that such abuses never occur again and for the church “to proceed with justice and reparation, where responsible, for the violences.”

Pope Francis has visited a famous shrine in Ireland and was to celebrate a Mass dedicated to families a day after an emotional meeting with victims of cleric sex abuse and some of Ireland’s thousands of forced adoptees.

Francis arrived Sunday in Knock, the Marian shrine in northwestern Ireland, where he prayed and blessed thousands of jubilant Irish faithful, who gathered in raincoats under clouds.

Francis’ first day in Ireland was dominated by the abuse scandal and Ireland’s fraught history of atrocities committed in the name of preserving the Catholic faith. He received a lukewarm reception on the streets, but tens of thousands thronged Dublin’s Croke Park Stadium for a family rally and concert.

The U.S. sexual abuse scandal took on a new twist Sunday, with a former Vatican ambassador to the U.S. purportedly penning a letter accusing Vatican officials of knowing about the sexual escapades of ex-Cardinal Theodore McCarrick since 2000, but making him a cardinal anyway. The letter was attributed to Archbishop Carlo Maria Vigano, a staunch conservative.

Pope Francis has held an emotional meeting with Irish victims of clerical sex abuse and those wrenched away from their unwed mothers in forced adoptions demanded by Catholic authorities.

On Saturday, Francis spent 90 minutes meeting with victims of clerical and institutional abuse, including two people forcibly given up for adoption as newborns. Clodagh Malone said Francis was “shocked” at what they told him and “he listened to each and every one of us with respect and compassion.”

The survivors asked Francis to speak out Sunday at Mass in Dublin to let all the mothers know that they did nothing wrong and that it wasn’t a sin — as church officials have told them — to try to find their children later in life.