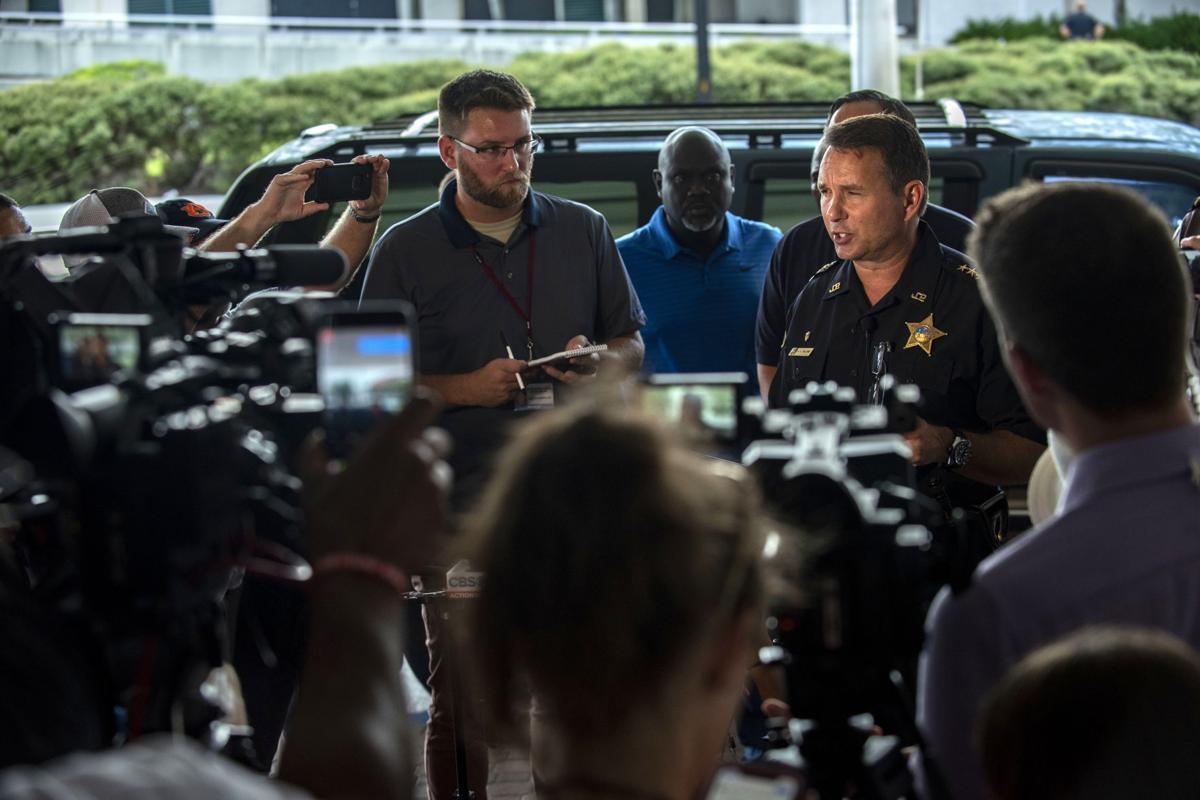 JACKSONVILLE, Fla. — The Latest on a deadly mass shooting at a video game tournament in Jacksonville, Florida (all times local):

Investigators say the suspect in a deadly shooting at a Florida video game tournament specifically targeted other gamers.

Jacksonville Sheriff Mike Williams said during a news conference Monday that video surveillance of the shooting shows 24-year-old David Katz of Baltimore walk past other patrons at a pizzeria and head to a back room where the tournament is being hosted before he opens fire.

Authorities say Katz killed two people and wounded 10 others before fatally shooting himself Sunday at the “Madden NFL 19” tournament being held at a riverfront mall. They say one person was treated for a “non-gunshot-related” injury.

Williams says the wounded victims are all expected to recover.

Officials haven’t released a motive for the shooting.

Williams says Katz carried two guns during the shooting but appears to have only fired one. Investigators say the guns were purchased legally in Baltimore from a licensed dealer.

Court records obtained by The Associated Press show that a man accused of killing two people and then himself at a video gaming competition in Florida had been hospitalized for mental illness.

Divorce filings from the parents of 24-year-old David Katz of Baltimore say that as a teenager he was twice hospitalized in psychiatric facilities and that he was prescribed anti-psychotic and anti-depressant medications.

The records show Katz’s parents disagreed deeply on how to care for their troubled son. Katz’s father claimed his estranged wife was exaggerating symptoms of mental illness as part of the couple’s long-running and acrimonious custody battle. They divorced in 2007.

Authorities say Katz killed two people and wounded nine others Sunday before fatally shooting himself at the “Madden NFL 19” tournament in Jacksonville.

A gaming rival of the man blamed for a deadly shooting rampage at a video game tournament says he’s baffled that anyone he had competed against online would resort to bloodshed.

Shay Kivlen of Seattle traveled to Jacksonville, Florida, for the weekend “Madden NFL 19” tournament. He was resting at his hotel Sunday when authorities say a gunman killed two people at the venue and wounded nine others before fatally shooting himself.

Authorities identified the shooter as David Katz of Baltimore. Kivlen said he’s heard plenty of rumors. A friend told him that he’d heard Katz was asking about Kivlen before the shootings.

Kivlen says gamers competing for cash feel pressure, but most still see it as a game.

He said: “In ‘Madden,’ you never get so mad at a loss that you would want to do that.”

A gaming rival of the former gaming champion suspected of killing two competitors, wounding nine others and killing himself recalled him as “being kind of different.”

Shay Kivlen was the best friend of one of the gamers who was killed in Sunday’s shooting at Jacksonville Landing in Florida.

Kivlen tells The Associated Press that 24-year-old David Katz didn’t talk much with fellow gamers, either online or when they met face-to-face for Madden tournaments. He says much of what he and others knew of Katz, they learned from his baffling style of playing the game.

Kivlen says Katz was smart, “but something was off about him.”

He says Katz wasn’t known to trash talk with rivals. But after winning a championship last year, Kivlen says Katz “got up and let out the weirdest scream ever.”

Kivlen was at his Jacksonville hotel when the shooting happened Sunday.

Authorities say a gunman opened-fire at an online video game tournament in Florida, killing two people before fatally shooting himself as a livestream of the event appeared to capture gunfire, shouts and screams.

Jacksonville Sheriff Mike Williams said at a news conference after the rampage Sunday afternoon that nine other people were wounded by gunfire and two others had been hurt in the chaos as people sought to flee.

He said authorities believe 24-year-old David Katz of Baltimore carried out the attack with at least one handgun at the Jacksonville Landing, a complex of eateries and shops on the St. Johns River in that north Florida city. He says the suspect died of a self-inflicted gunshot and authorities were still confirming his identity.

He says he has no immediate motive for the shooting.

A previous version of this report had an incorrect spelling of Shay Kivlen’s name.