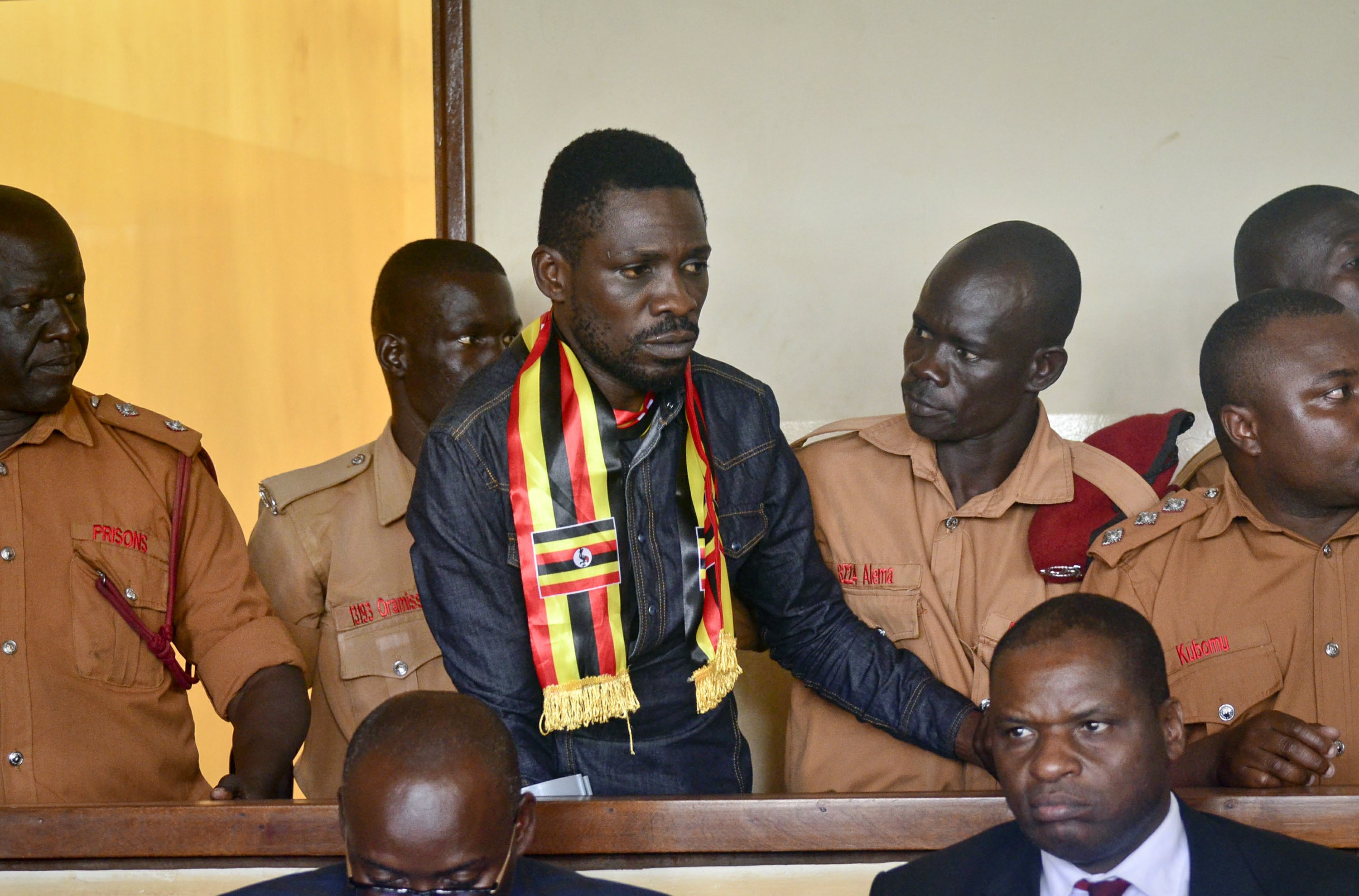 KAMPALA, Uganda — To chants of “People power! Our power!” Ugandan pop star-turned-government critic Bobi Wine was freed on bail Monday, ending days of incarceration during which he and some of his co-accused were allegedly tortured by security forces.

The 36-year-old lawmaker, whose real name is Kyagulanyi Ssentamu, was on crutches as left the courthouse in the northern Ugandan town of Gulu. He alleges that he was injured by severe beatings by security forces while he was in detention.

Ssentamu had been detained since Aug. 14.

A judge freed him alongside others who are similarly charged with treason for their alleged roles in an incident in which President Yoweri Museveni’s motorcade was pelted with stones.

An ambulance was on standby to transport Ssentamu to a hospital after he was released. Scores of his supporters outside the courtroom cheered when he came out of the courthouse. Dozens of his supporters shouted the slogan about people’s power which had been popularized by Ssentamu.

“We are much stronger and greater in spirit than we were before,” Gerald Karuhanga, one of Ssentamu’s co-accused, told local broadcaster NTV after being freed, alleging torture.

Ssentamu was initially charged before a military court with illegal possession of firearms and ammunition. On Thursday those charges were withdrawn and he was immediately re-arrested and charged before a magistrate with the more serious offense of treason.

Ssentamu’s arrest came after he was campaigning on Aug. 13 in an election to choose a lawmaker in the northwestern town of Arua.

Museveni also was in Arua at the time, campaigning for a rival candidate who eventually lost.

While the president was departing, authorities said, his motorcade was pelted with stones by people believed to be supporters of Ssentamu and the candidate he backed, Kassiano Wadri.

Ssentamu’s driver was shot and killed that evening, allegedly by security forces.

Authorities have been under pressure to free Ssentamu, who is challenging the long rule of Museveni by appealing to young people who despair over the lack of jobs and other opportunities. His supporters, citing his success in helping opposition candidates to win elections across the country, are urging him to run for president in 2021.

The treason case could drag on for months and maybe even years, potentially crippling Ssentamu’s efforts as an anti-government activist.

The jailing of Ssentamu drew street protests at home as well as outrage from top musicians around the world. He alleges severe torture while in detention.

Another lawmaker, Francis Zaake, is hospitalized with serious injuries he sustained in detention after being arrested over the Arua incident.

The treason charges are “a disgrace,” he said.

At least two of Ssentamu’s co-accused fainted during court proceedings, and one of them had required resuscitation, Besigye told reporters.

The government denies the allegations of torture.

Museveni, a U.S. ally on regional security, took power by force in 1986 and has since been elected five times. Although he has campaigned on his record of establishing peace and stability, some worry that those gains are being eroded the longer he stays in power.

The 74-year-old Museveni is now able to seek re-election in 2021 because parliament passed legislation last year removing a clause in the constitution that had prevented anyone over 75 from holding the presidency. Ssentamu publicly opposed that decision.