‘Way too short:’ A 93-year-old meets his N. Korean brother 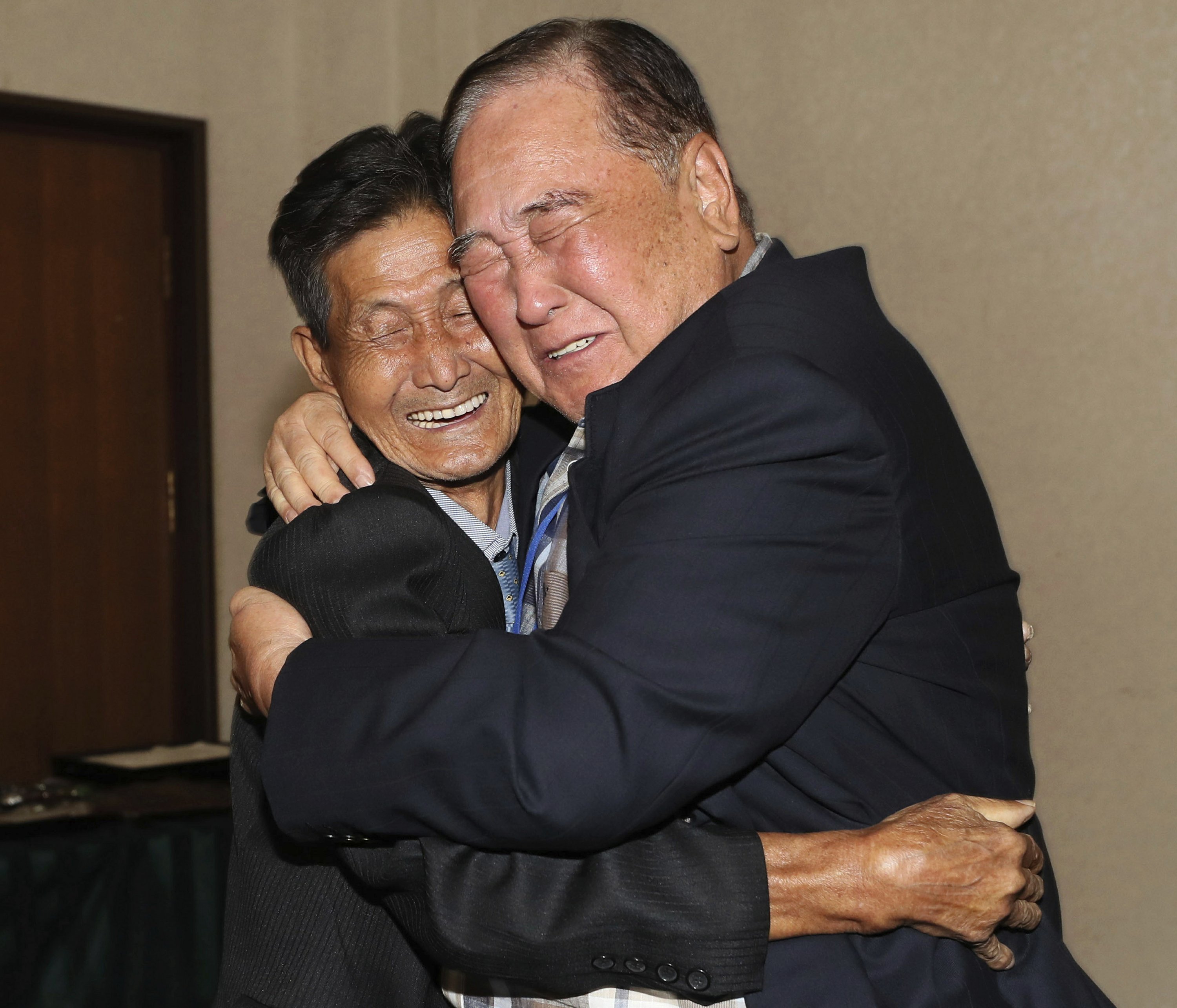 DONGDUCHEON, South Korea — Ninety-three-year-old Ham Sung-chan’s eyes widen with excitement as he describes the shock and euphoria of reuniting with his baby brother, now 79, during three days of family reunions in North Korea.

But there’s a deep and bitter regret, too, and it stems from a simple bit of math: After nearly 70 years of a separation forced by a devastating 1950-53 war that killed and injured millions and cemented the division of the Korean Peninsula into North and South, Ham and his North Korean brother only got a total of 12 hours together.

Ham was one of the 197 South Koreans who visited North Korea’s scenic Diamond Mountain resort from last Monday to Wednesday for rare reunions with relatives in the North. The heart-wrenching images of elderly Koreans embracing each other for the last time continued in a second set of reunions involving around 300 South Koreans that took place from Friday to Sunday.

“There’s a large sense of dejection that has set in,” said Ham, who described the details of his trip in an Associated Press interview in his home in Dongducheon, north of Seoul. “The time we spent together was too short, way too short. It wasn’t a week; it wasn’t 10 days. Just after we met, we had to depart.”

Here’s how Ham described the brief but intense time he spent with his North Korean brother after so many decades apart:

Born in eastern North Korea, Ham was in his 20s, selling fish and cosmetics in the South when war broke out in June 1950 and prevented him from returning to his hometown.

Ham thought his mother was still in the North until he met her in the South in 1983, several years before her death. But he did not expect any of the three brothers he’d left in North Korea to be alive. If they weren’t killed by the war or North Korea’s devastating 1990s-era famine, he thought they would have died of old age.

One of his brothers, however, 79-year-old Ham Dong Chan, was frail but still alive and eager to meet his oldest brother. But Ham’s joy when he learned of this soon gave way to anxiety. His mind raced with endless questions.

Who’s this person they say is my brother? Will he resemble the skinny, quiet kid I remember? What if I don’t recognize him? Did he have a difficult life? Does he have grandchildren?

The day before the reunions, Ham, his wife and younger daughter drove to a resort in the South Korean coastal town of Sokcho where the South Korean participants spent a night before crossing into North Korea by bus.

Red Cross officials arranged health checkups for the participants, who were told not to criticize North Korea’s authoritarian leadership and broken economy and not to point at portraits of the three leaders of the Kim dynasty that has ruled the North since 1945.

“I couldn’t sleep at all that night,” Ham said.

On Monday morning, Ham’s bus crossed into North Korea. Ham said he felt “spooky” when three North Korean soldiers, in olive-green uniforms and large round hats, came aboard his bus during a border check.

“They only asked me when I had crossed over to the South,” Ham said. “I told them it was before the war.”

After arriving at the Diamond Mountain resort, Ham marveled at how the modern facility differed from the underdeveloped surroundings, where small, crude homes were scattered around fields and on hills. The resort was built by South Korea’s Hyundai business group during a period of rapprochement in the 2000s. Analysts say North Korea, which has long rejected South Korean demands to increase the number of reunions and participants, keeps the meetings at Diamond Mountain to limit North Koreans’ awareness of what’s going on in the outside world.

Ham unpacked in room No. 512 at the Kumkangsan Hotel at the resort. It had nice beds, air conditioning and hot water, but the bulky television did not work.

The first meetings took place at about 3 p.m. Ham’s heart trembled as he walked with his wife and daughter toward the banquet hall where the North Korean relatives were waiting at white tables. As Ham approached a table marked with the number 90, a slim, deeply wrinkled man in a suit and tie sprung from his seat. The brothers embraced tightly, smiling widely, tears streaming down their faces.

“He yelled, ‘Brother, it’s me!'” Ham said. “I recognized him right away. He was still that skinny, quiet kid. Maybe our bloodlines pulled us together.”

For four hours, Ham and his brother mostly talked about family, explaining to each other when their parents and brothers had died.

DAY 2: FROM THRILLED TO DEVASTATED

Ham had another sleepless night after the meeting. He was thrilled to see his brother but devastated that one-third of their reunion was already over.

On Tuesday, the brothers had deeper conversations over lunch in a room at a nearby hotel, away from North Korean government watchers and the dozens of South Korean reporters covering the event.

Dong Chan, who came to the meetings with his 72-year-old wife, had thought that his oldest brother was dead. He did not know that his mother had made it to the South, remarried there, and lived for decades.

Dong Chan said he had been hospitalized in Pyongyang to treat migraines when he received word from North Korean authorities that his brother in South Korea was looking for him.

“He told the authorities that it must be a different person with the same name because he was so convinced that I had died,” Ham said. “When North Korean officials asked again, this time mentioning the names of our parents, he was shocked.”

During those three hours of talks Tuesday, workers brought Ham’s bags of gifts. Ham also gave Dong Chan an album containing dozens of photos of him, his family and their mother. Dong Chan gave Ham three bottles of liquor made from ginseng and a silk tablecloth.

“It didn’t taste good; I couldn’t finish it,” Ham said.

Ham told his brother about how he overcame poverty in his younger days and how proud he was of his three U.S.-educated children. But because of the anti-American sentiment prevalent in the North, he left out that he worked at a U.S. military base in Dongducheon for nearly two decades as a civilian employee.

Ham said Dong Chan was equally proud of his life as a retired North Korean government worker. Dong Chan said he’s living in an apartment in the capital of Pyongyang, which itself is a status symbol in North Korea. He also talked about a grandson who was studying at the prestigious Kim Il Sung University.

“Once I heard that he was living in Pyongyang, I was relieved,” Ham said. “As brothers, we had so much to talk about over so little time. But other South Korean relatives were meeting North Korean nephews they’d never seen — some of them told me it was hard to keep a conversation going after 30 minutes.”

Ham tried hard to be cheerful during his last lunch with Dong Chan on Wednesday. He laughed, clinked glasses of beer with his brother and shouted “good health is the best!”

Ham promised Dong Chan that he will be the first South Korean to apply for a North Korean visa if relations improve to the point where cross-border travels are allowed. Dong Chan told Ham that North Korean leader Kim Jong Un’s relationship with South Korean President Moon Jae-in was so close that the Koreas will be able to unify in three years.

But Ham’s spirits sank as the clock ticked away. After organizers announced that the meeting had ended, Ham said goodbye and walked out of the banquet hall alone, sobbing all the way to the bus waiting to take him home. Ham’s wife and daughter lingered a bit longer at the hall, tearfully embracing the North Korean relatives they were just getting to know.

Later, outside the hotel, Ham, still in tears, waved both hands from inside the bus as his brother came out to see him off. The bus slowly rolled out of the resort and headed back to South Korea.