At Yale, Kavanaugh stayed out of debates at a time of many 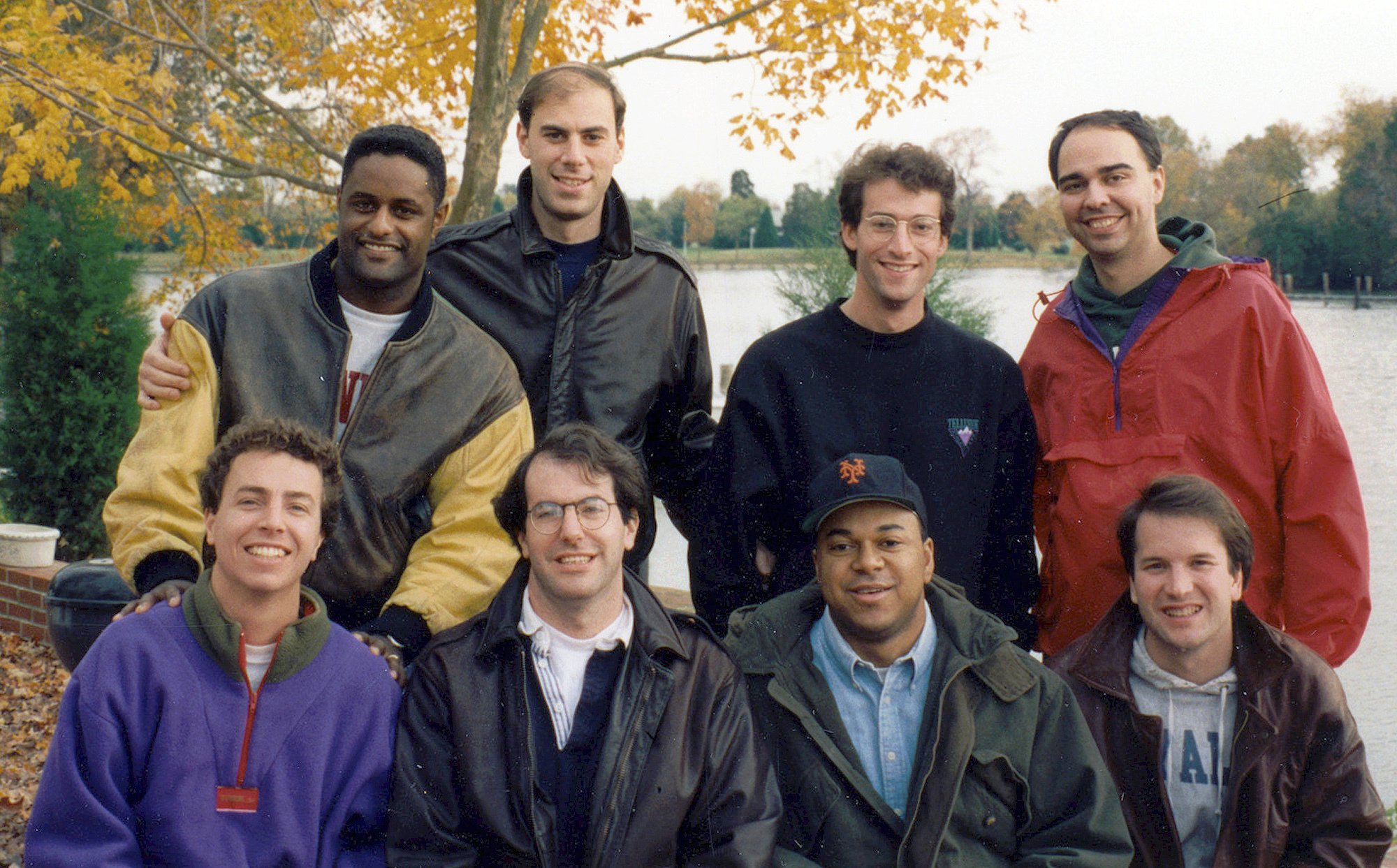 It was the 1980s at Yale University, and Brett Kavanaugh’s classmates were protesting South Africa’s apartheid system, rallying for gay rights and backing dining hall workers in a labor dispute.

But friends and acquaintances say the future Supreme Court nominee seemed more interested in battles on the basketball court than politically charged debates.

“If you had asked him back then: ‘You have the option of becoming a Supreme Court justice or having a six-year career in the NBA,’ I think he would have picked the NBA,” said Rusty Sullivan, a fellow sportswriter at the college paper.

In some ways, Kavanaugh was like many Yale students of his time: a product of a high-powered East Coast prep school who majored in history, then Yale’s most popular major, and headed for law school after graduating in 1987. Interviews with more than a dozen people who knew him in college and Yale Law School draw a portrait of a serious, but not showy student and sports lover whose drive and competitiveness helped him both on the court and in the classroom.

He pledged a party-hearty — for Yale — fraternity at a time when Greek life was minimal there; a resurgence would kindle campus debate during his undergraduate years. He also joined an all-male “senior society,” a campus group that selects a handful of students each year for private socializing.

Kavanaugh, who grew up in Bethesda, Maryland, has said he came to realize he was headed down a different philosophical path than many of his classmates. At Yale Law, he repeatedly found himself siding with conservative Supreme Court Chief Justice William Rehnquist, he recalled in a speech last year to the right-leaning American Enterprise Institute.

“That often meant, in the Yale Law School environment of the time, that I stood alone. Some things don’t change,” said Kavanaugh, who would become the fourth Yale Law graduate sitting on the high court if he’s confirmed.

The White House declined to comment for this story. The Senate Judiciary Committee is scheduled to begin hearings on the nomination Tuesday.

Classmates don’t recall Kavanaugh as outspoken about his views — “I knew him more as a sports fan than a fan of any political agenda,” says law school friend Jonathan Franklin — and therefore not inclined to take sides in campus controversies such as a 1984 clerical and technical workers’ strike that closed dining halls for weeks.

To friends, Kavanaugh perhaps stood out most for not showcasing himself as a standout on a campus where many students aren’t shy about their intellect and ambition.

“You meet people who say, ‘I’m going to be a senator someday,’ but Kavanaugh wasn’t one of them,” says Chris Munnelly, one of his Delta Kappa Epsilon fraternity brothers.

Friends figured Kavanaugh was an academic talent — in classes, he “understood things more clearly and just ‘got it’ easier than others,” pal and hallmate Dwayne Oxley said — but the now-judge didn’t wear his smarts on his sleeve. Friends describe him as humble, approachable — “a normal guy, in a positive sense,” as Munnelly puts it.

His passion, those who knew him say, was sports.

He tried out for the varsity basketball team and didn’t make the cut, but then-coach Tom Brennan still remembers being struck by the freshman’s “wonderfully pleasant,” upbeat demeanor. Kavanaugh went on to play two years on the JV, plus intramural basketball, football and softball and pickup hoops at the campus gym with other students and locals from surrounding New Haven, Connecticut.

An unselfish point guard, Kavanaugh was someone the best varsity players wanted on their teams during pre-season pickup games because of his “calm smarts and work ethic,” said Dino Ewing, a teammate and close friend. And he always had his teammates’ backs, said Ewing, who recalled the roughly 6-foot-tall Kavanaugh immediately stepping up to take on a taller player on defense after Ewing got knocked down one game.

A few years after graduation, he and Kavanaugh decided to race each other in a half-marathon. Ewing ran track in high school and thought it wouldn’t be a competition. But Kavanaugh ended up winning by a half-hour and went on to run marathons, Ewing said.

Kavanaugh also wrote about basketball and other sports for the Yale Daily News. Then-sports editor Dan Levy said Kavanaugh’s drafts were dry, but thorough, and editors “were very happy to have someone reliable covering a big sport like basketball.”

Kavanaugh went on to become an editor on the notes committee of the Yale Law Journal, and in 1989 wrote his own note in which he argued that courts should ensure the defense is present to hear prosecutors’ explanations for objecting to certain jurors.

Still, Kavanaugh’s time at Yale wasn’t all sports and studying. He made it to his share of campus parties, friends said, and joined social circles heavy on athletes, tradition and male bonding.

Fraternities had dwindled at Yale in the 1960s, and no frat houses remained on campus by the time Kavanaugh arrived in fall 1983. But fraternities would begin growing again during his Yale years, partly due to a crackdown on underage drinking at big campus-sponsored bashes as Connecticut’s drinking age rose, according to Yale Daily News stories at the time.

Members say Kavanaugh could hold his own in meetings where guys jostled to crack the funniest joke, but he also was thoughtful toward younger members.

“He was someone you could always ask a question to and get advice. He was always really generous with his time,” says Tom Virgulto, a fellow DKE member.

With no house at the time, DKE brothers met in lounges on campus, and then-members describe it as more like a student club than “Animal House.” Its activities included volunteering with a children’s organization.

But it also made a frat-style social splash, holding a toga party, reviving a beer-drinking competition that college officials had banned from campus, and dispatching pledges it called “buttholes” around campus to wave a flag consisting of women’s underwear, sing while standing on dining-hall tables and race around trying to capture one of the brothers, according to Yale Daily News articles and photos from the time.

Virgulto says the initiation antics were “never anything dangerous or offensive … more laughing at yourself.”

The frat comeback met with mixed feelings over whether the brotherhoods livened up Yale’s social life or socially fragmented the student body and harkened to a boys-clubbier past. The issue even sparked a formal campus debate during Kavanaugh’s junior year; the pro-Greek side won.

The year after Kavanaugh graduated, the fraternity was embroiled in racial controversy after a black sophomore said he was barred from a party at DKE’s new off-campus house because of his race.

The fraternity’s then-president said the party was simply overcrowded but acknowledged a member had told the visitor he could “call the NAACP” about it, according to a Yale Daily News story then. DKE apologized.

The student, a member of another fraternity, didn’t make a formal complaint. He said Greek life at Yale had problems, but also value, at another formal campus debate two weeks after the party. (The pro-Greek side prevailed again.)

Students were split, too, over “senior societies,” which have operated with varying degrees of status and mystery at Yale for over 180 years.

Long-established societies such the storied and secretive as Skull and Bones — which counts President William Howard Taft and both Presidents Bush among past members — boasted windowless buildings known as “tombs,” shrouded in an atmosphere of rumor and ritual.

Truth and Courage, founded around the late 1970s, had no building of its own, and membership wasn’t exactly a secret: Kavanaugh listed it in his yearbook.

Like Skull and Bones and some other senior societies, Truth and Courage was then all-male, though others already admitted both men and women.

Oxley was a member the year before Kavanaugh, when a dozen seniors met at a member’s off-campus apartment. Mostly athletes, they convened Thursdays for dinner and often a stop at a local bar, and Sundays to dine and hear a member give his bio, said Oxley, who played hockey.

Some students scorned senior societies as elitist. “For us, it was really another social organization,” Oxley said.

Kavanaugh has kept up with his undergraduate class, participating last year in a 30th reunion panel discussion on free speech, race and “living history” at Yale.

He remains particularly close to his law school housemates, who get together once a year to do things like watch baseball spring training, go sailing or hang out at someone’s house. And being a Supreme Court nominee doesn’t give him a free pass to skip this year’s trip, friends say.

“He’s a little notorious for showing up for 24 hours or less but has sometimes gone to great lengths to do that,” said one of the housemates, Jim Brochin. “So I’m guessing that he’ll make it.”