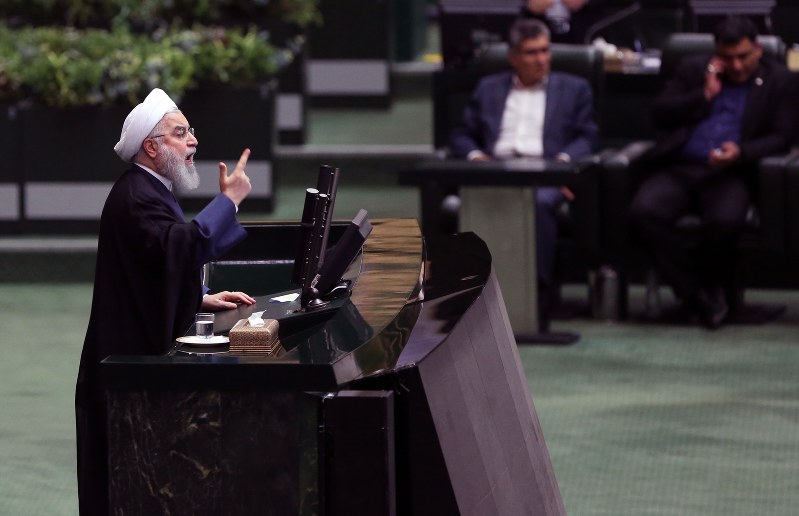 TEHRAN, Iran — Iranian President Hassan Rouhani failed to convince parliament on Tuesday that his plans will pull the country out of an economic nosedive worsened by America’s withdrawal from the nuclear deal, further isolating his relatively moderate administration amid nationwide anger.

For only the second time in its history, parliament ordered a sitting president to appear before it to answer questions, the last time coming amid widespread discontent in 2011 over Western sanctions in the government of hard-line President Mahmoud Ahmadinejad.

While Rouhani warned that “painting a bleak picture of people’s lives will lead to further darkness,” lawmakers voted four separate times to say they were unconvinced of his answers about Iran’s recession, its cratering currency, unemployment and smuggling. Those questions now could go to Iran’s judiciary for further review, serving as a warning to the cleric his political stature is slipping.

“Certainly, we made and we have made mistakes,” Rouhani acknowledged at one point.

Since Iran’s 1979 Islamic Revolution and subsequent takeover of the U.S. Embassy in Tehran, it has faced American sanctions. Those measures only increased in the 2000s over Western fears Iran’s nuclear program could allow it to build atomic bombs, something Tehran always denied wanting.

Under the 2015 nuclear deal reach between Iran and world powers including the U.S. under President Barack Obama, Tehran agreed to limit its enrichment of uranium in exchange for the lifting of sanctions. That allowed banks to re-connect Iran’s financial system to the world and brought foreign firms from airplane manufacturers to oil companies back into the country.

But in May, longtime deal skeptic President Donald Trump pulled America from the accord. That only fanned the flames burning through the country’s economy from chronic unemployment, high inflation and drastic drops in its currency. Those problems sparked nationwide protests in December and January across Iran that started in strongholds of Rouhani’s opponents, as well as sporadic, leaderless protests to today.

Lawmakers already have fired Rouhani’s labor and finance ministers this month amid the economic crisis.

Speaking Tuesday before parliament, Rouhani said those protests only strengthened Trump’s hand to pull out of the atomic accord.

“This lured Trump into saying . that he will not remain in the deal,” Rouhani said.

Rouhani also made a cryptic remark that Iran has a “third way” to deal with ongoing crisis other than simply abandoning or staying in the nuclear deal. He did not elaborate, but said he mentioned the idea to French President Emmanuel Macron on Monday.

Marcon in a speech Monday mentioned speaking to Rouhani, though only saying that France in coordination with Britain, Germany and the EU will keep working on “preserving” the deal.

Rouhani’s growing political weakness has been a boon to hard-liners within Iran’s Shiite theocracy. Those pressures have only been growing.

A demonstration last week saw hard-line clerics waving a placard calling the Rouhani’s negotiations with the West his “swimming pool.” That’s a reference to long-swirling rumors surrounding the death of former Iranian President Akbar Hashemi Rafsanjani, a political godfather to Rouhani whose body was found in a swimming pool.

“If I am threatened with assassination, I’m OK with it. I don’t think of it as a big deal,” Rouhani said. “We all know that it is our dream to be killed in the path of God.”