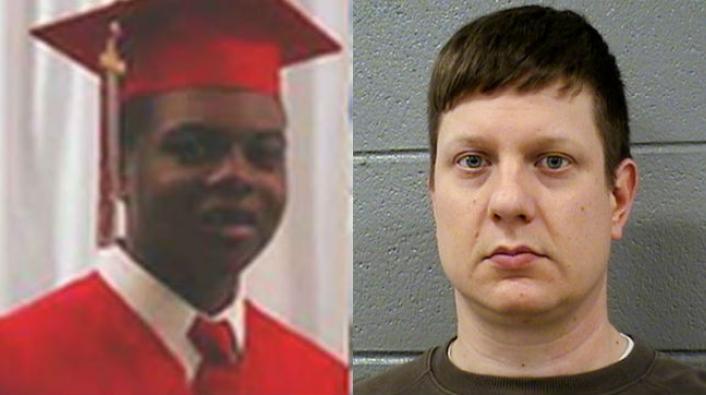 CHICAGO — The white Chicago police officer charged with first-degree murder in the fatal shooting of black teenager Laquan McDonald says he was doing what he was trained to do and that the case against him shows prosecutors are bowing to political pressure.

In his first interview since he was arrested — and just days before jury selection in his trial is set to begin — Officer Jason Van Dyke told the Chicago Tribune: “I never would have fired my gun if I didn’t think my life was in jeopardy or another citizen’s life was.”

Van Dyke didn’t discuss any details of the 2014 shooting in the interview that was tightly controlled by his attorney, including the likely focus of the prosecutors’ case: that no other officer shot at the teen and that his written report that he believed McDonald was attacking him with a knife contradicts what can be seen in the now-famous dashcam video.

“Of course, I’m extremely nervous,” he said. “I might be looking at the possibility of spending the rest of my life in prison for doing my job as I was trained as a Chicago police officer.”

Van Dyke was arrested in November 2015, a year after the shooting and on the same day that the video showing him shooting McDonald 16 times was publicly released. The Chicago Police Department has suspended Van Dyke without pay.

He spoke about his daily prayers for the McDonald family following the “darkest day” of his career. And the officer said he has been at the center of a political storm since the video was released.

“I think there’s been a lot of external political pressures,” he said. “It just seems like politics has been involved with this since the beginning.”

McDonald’s family, though, said the interview is nothing more than a legal maneuver designed to sway prospective jurors.

“Is he praying or is he just saying what he thinks you want to hear?” asked McDonald’s great-uncle, the Rev. Marvin Hunter, adding that if he was advising Van Dyke he would advise him to say exactly what he did. “They’re trying to write a narrative. They’re trying to influence the jury.”

It is unclear how the judge, who has prohibited the attorneys from discussing the case outside of court, will react to the interview or how it might affect any decision on a change of venue motion filed by Van Dyke’s lawyers. The defense team argues that the pretrial publicity has made it impossible for Van Dyke to receive a fair trial.

Jury selection in his case is scheduled to begin next week.

Defense attorney Dan Herbert is not quoted in the Tribune story beyond a brief comment to Van Dyke not to talk about “any pre-shooting.” A spokesman for the special prosecutor, Kane County State’s Attorney Joseph McMahon, declined a request to comment.

Convictions in murder cases against on-duty police officers are rare. A former Dallas-area police officer was found guilty of murder on Tuesday. Roy Oliver fatally shot an unarmed black teenager as the boy left a Balch Springs house party with his friends.