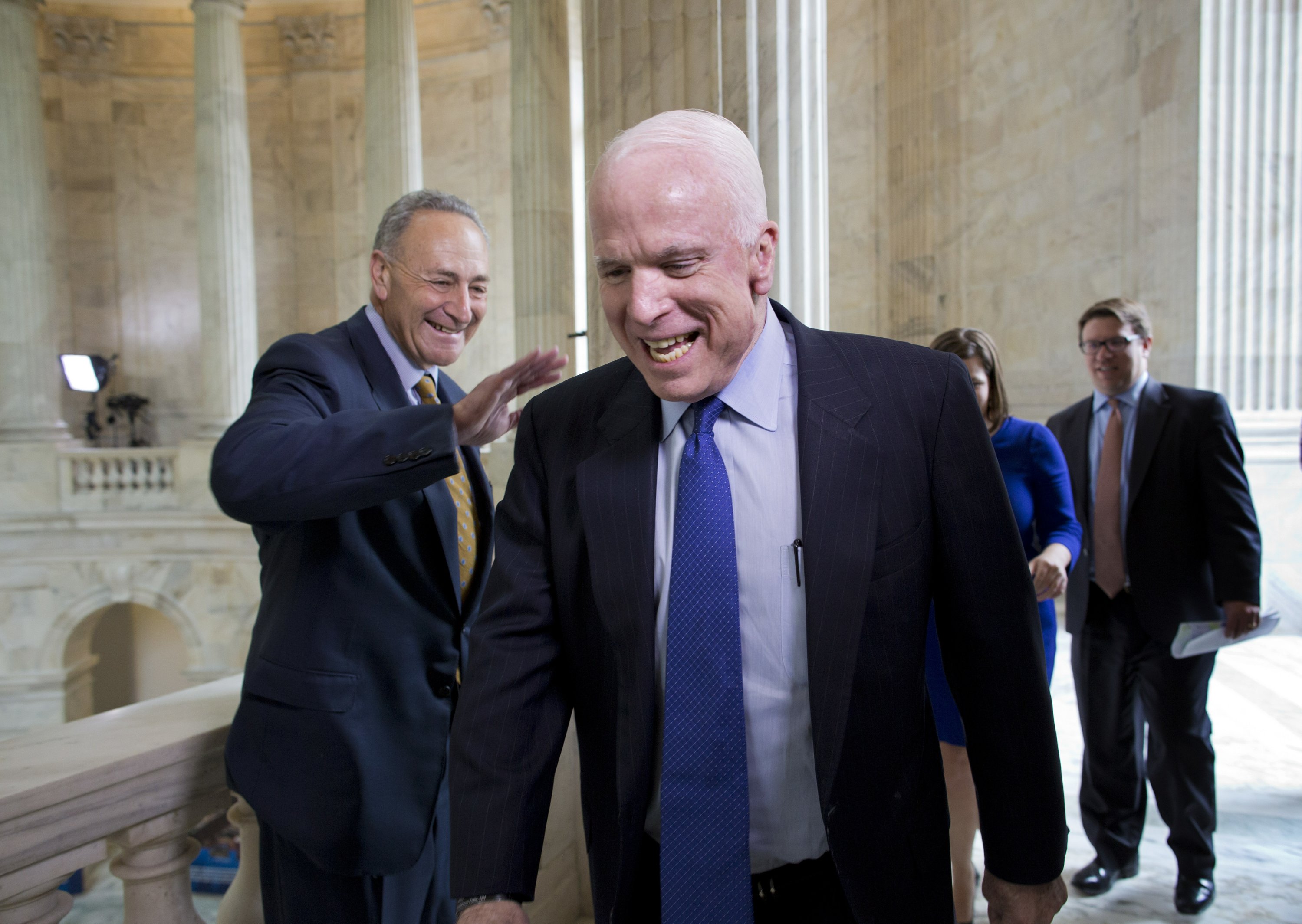 WASHINGTON — A proposal to rename the Senate’s oldest office building for John McCain ran into resistance Tuesday from Republican senators reluctant to take away an honor already bestowed on an earlier Senate titan — and a leader of Southern senators during a tumultuous era in the nation’s history.

Senate Majority Leader Mitch McConnell, looking to defuse a budding controversy, said he will form a bipartisan panel to solicit ideas on the best way to honor the late Arizona senator.

McCain “meant so much to so many of us — inside this chamber and out,” McConnell said Tuesday in a speech on the Senate floor. “The Senate is eager to work on concrete ways to continue this momentum and provide a lasting tribute to this American hero long after this week’s observances are complete.”

Besides the proposal to rename the Russell Senate Office building, lawmakers may consider naming a room used by the Senate Armed Services Committee after McCain, who was the panel’s chairman, McConnell said. Another idea is to add McCain’s portrait to a reception room right off the Senate floor, joining such giants as Henry Clay, Daniel Webster and Robert Taft. Only seven senators are honored with portraits there.

McConnell was careful not to make a specific recommendation.

The 109-year-old building is named after Sen. Richard Russell, a Georgia Democrat who, like McCain, chaired the Armed Services panel. Russell, who died in 1971, was a segregationist and led Southern opposition to anti-lynching bills and other civil rights legislation, including the 1964 Civil Rights Act. He co-authored the “Southern Manifesto” to slow the integration of public schools after the Supreme Court unanimously ordered it in 1954.

Previously known simply as the Senate Office Building, it was renamed in Russell’s honor the year after his death.

While some Republicans were receptive to Schumer’s proposal, many were hesitant to rename a building that honors a senator who served for nearly four decades and was a formidable presence known as a “senator’s senator” because of his mastery of Senate rules. An ardent defender of the defense budget, Russell also was author of the School Lunch Act, which provides free and low-cost meals in public schools.

Republican Sen. Chuck Grassley of Iowa, who served with McCain for 31 years, said he was in favor of “naming almost any building” for McCain, but added, “I’m not sure that I would make a decision on a specific building at this point.”

Republican Sen. Jeff Flake of Arizona, who co-sponsored the measure, said renaming the building would be “a particularly good” way to honor McCain, but wanted to make sure McCain’s family agreed.

Georgia’s GOP Sen. David Perdue, whose own office was once used by Russell, said he’s unsure if residents back home would accept a name change for the building.

“This is Washington. There’s going to be 50 percent for something and 50 percent against something,” Perdue said Tuesday.

The Senate should spend time finding “the right way” to memorialize McCain’s service, Perdue said. “To knee jerk, to do anything — any suggestion — right now is premature,” he said.

Republicans backed McConnell’s plan to study the issue, with some saying McCain himself would appreciate the GOP leader’s commitment to “regular order,” including the process of committee work.

McCain “didn’t want ideas cooked up in some back room and sprung on the Senate,” said Sen. John Cornyn of Texas, the No. 2 Republican senator.

“I’d name the Capitol after the old guy if I could,” joked Sen. Lindsey Graham, R-S.C., McCain’s closest friend in the Senate.

More seriously, Graham said the Capitol Visitor Center could be named for McCain. The 10-year-old building is not named for anyone.

“What a great way to be exposed to the Capitol by hearing the life story of John McCain,” Graham said, noting that McCain served in the House and Senate, was a Navy aviator and a war hero who was held prisoner for more than five years in North Vietnam.

“Instead of worrying about what to name for him … let’s be more like him,” Graham said.

Fellow Tennessee Republican Sen. Bob Corker said he was “all for” renaming the building in McCain’s honor but that “there’ll probably be some discussion about that” in both parties.

“Russell is somebody that’s obviously a huge figure, but it is an era that’s gone by. We’re in a new era now,” Corker said Monday.

“Who would want to vote against naming a building after somebody who just passed away?” Corker asked, before answering his own question. “There may be some curmudgeon that wouldn’t want to do that.”

The proposal to rename the building drew opposition from some Southern senators.

“You know Richard Russell was … from the South, and I’m sure not perfect like George Washington and everybody else in his days, but he was a well-respected senator,” said Republican Sen. Richard Shelby of Alabama. The renaming idea is something “we have to think about,” he added.

“I think Russell being named Russell is that generation of senators’ message to future generations,” Cassidy said. “What I don’t want is to establish a precedent so something named after John McCain is named after somebody else in the future.”

Schumer, who worked closely with McCain on immigration and other issues, called McCain one of the “few truly great people” he’s met in public service. “His dedication to his country and the military were unsurpassed, and maybe most of all, he was a truth teller — never afraid to speak truth to power in an era where that has become all too rare,” Schumer said.

Schumer called Russell “a towering figure in the Senate of his day” but an avowed opponent of civil rights and racial equality.

“It is time we recognize that as the times change, so do our heroes,” Schumer said.

The renaming proposal would not need approval from the House or from President Donald Trump, a longtime McCain nemesis.