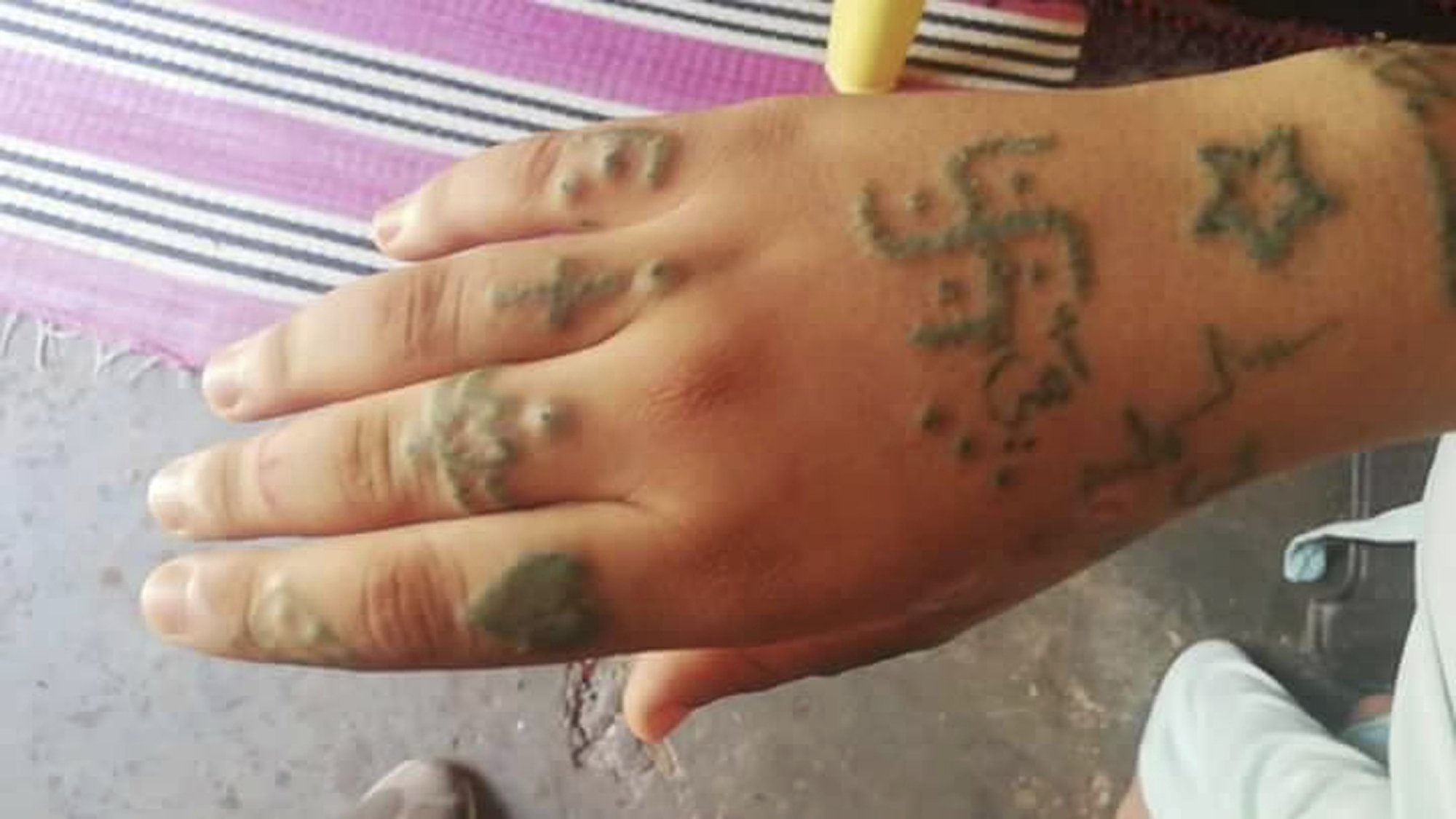 OULAD AYAD, Morocco — The mother of a 17-year-old Moroccan girl who told police she was gang-raped, forcibly tattooed and held against her will for two months recalled how her daughter was dumped at the family’s home by two men, the scars of horror stamped on her body, “her honor lost.”

The harrowing case in a nation where violence against women is widespread but largely ignored has sparked a public outcry, with people taking to social media to demand justice and a petition campaign invoking the teenager’s name: “We are all Khadija.”

The teen, whose story has dominated Moroccan media since an online video was posted last week showing her arms, legs and neck covered in crude tattoos and cigarette burns, told authorities she was released in mid-August after two months in captivity.

In an interview Wednesday with the Associated Press, her distraught mother said she fainted when she saw her daughter’s desecrated body and asked whether the girl would ever again be the daughter she knew.

“I was caught off guard when those criminals brought my daughter and I saw her in this condition. I fainted … I collapsed, seeing her like that, the tattoos, the burns, her honor lost,” the mother said, speaking on condition of anonymity to protect the family’s privacy and that of her daughter, who she referred to only by her first name, Khadija.

“Why did they do this to my child? Are they beasts? Will my daughter ever return to the way she was?” the mother asked.

Reflecting the stigma associated with sexual abuse in this Muslim nation, the girls’ parents initially refused to report her case to authorities.

“But she insisted,” her mother said. “She picked up the family records and just went to the gendarmes. I followed her.”

As the mother spoke, rabbits and chickens roamed about the cement floor of the family’s rundown home in the town of Oulad Ayad in the Atlas Mountains of central Morocco, a rural region rife with poverty and high rates of illiteracy and unemployment.

Twelve suspects are in custody in the alleged kidnapping and rape, and three are still at large, according to Ibrahim Hashane, a volunteer lawyer who is pressing the case. He said Wednesday that an examining judge had ordered an investigation and a hearing was scheduled for Sept. 6.

In an online video interview with Morocco’s Chouf TV last week, the girl alleged that her kidnappers “would assault me one by one,” burned her and didn’t feed her or let her shower. She displayed crude swastikas and other tattoos as well as cigarette burns on her hands and legs.

The teen said that two men kidnapped her at knife-point when she was visiting her aunt during the May-June holy month of Ramadan, before selling her to other men in exchange for money or drugs. She said her captors gave her drugs that knocked her out for days at a time.

The horrific account has sparked calls for an end to a culture that turns a blind eye to sexual assault and other violence against women, with nearly 75,000 people signing a petition urging action.

In an article titled “We are all Khadija,” Moroccan author and filmmaker Abdellah Taïa, criticized what he called Morocco’s rape culture and called on the government and King Mohammed VI to intervene. It was signed by dozens of Moroccan intellectuals.

“We will move on. A new source of collective excitement. Nothing will be done,” he wrote. “And as always, it is women who pay the price of all the dysfunctions of a society that still does not want to grow.”

Rape victims in Morocco often face backlash in a conservative society where they are often blamed for their ordeals.

In the case of Khadija, relatives of some of the suspects and others have come forward to cast aspersions on her character.

Among them was Houcine Harshi, president of the Moroccan Association for the Defense of Human Rights, who cautioned that her allegations should be viewed with caution and claimed that she was known in town for associating with drug users, something that her mother strongly denied.

Abdelwahed Saadi, a social worker and neighbor of the teen’s family, said no circumstances could excuse the alleged assault.

“This girl is a minor. She says she has been abused and raped. Her words must be taken seriously,” he said.

In Morocco, violence against women remains widespread and a largely taboo subject.

Concern about sexual violence gained momentum last year when video footage circulated online of boys on a bus ripping the clothes off a girl and groping her breasts, among other abuse. Neither the passengers nor the bus driver intervened.

A survey by U.N. Women, a United Nations agency for the empowerment of women, carried out in the Moroccan capital, Rabat, and in some neighboring cities found that 41 percent of the men surveyed believe that financial support justified marital rape.

Over 50 percent reported having been emotionally abusive to their wives, and 15 percent acknowledged using physical violence against women.

The survey, conducted in 2016 and released in February, found that 62 percent of the men interviewed believe women must tolerate violence to preserve family unity. The study questioned 2,400 men and women over three months. No margin of error was given.