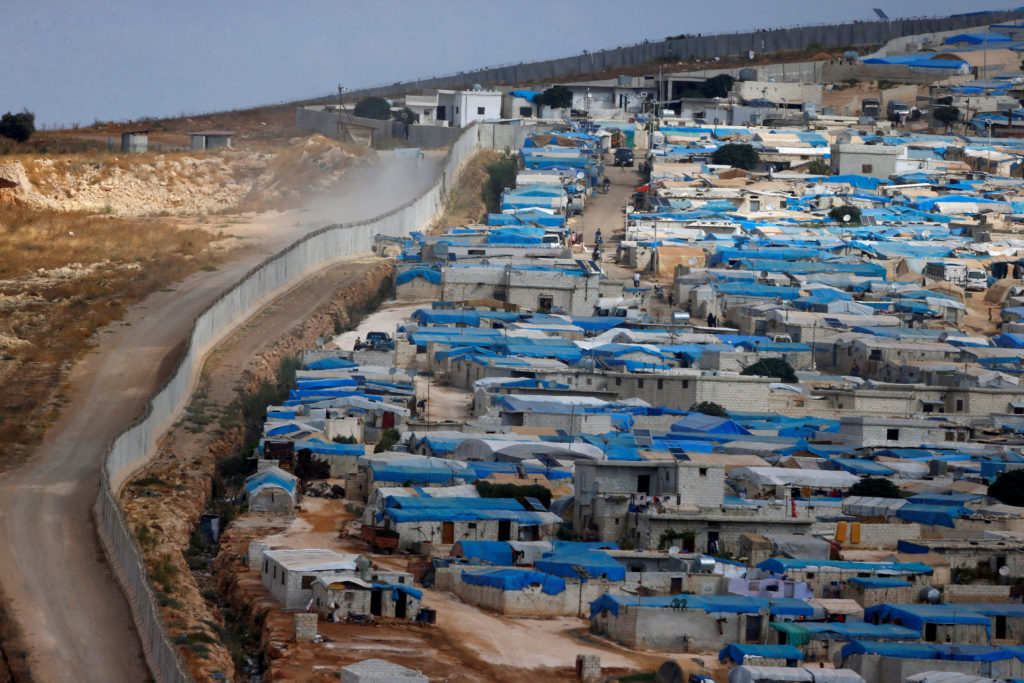 GENEVA — Fearing a military offensive, the U.N. envoy for Syria proposed Thursday that civilians holed up in the rebel-held region of Idlib could evacuate to government areas — a move that would send many back into parts of Syria they once fled in its 7-1/2-year-old civil war.

U.N. envoy Staffan de Mistura expressed fears of a “perfect storm” that could have a devastating impact on nearly 3 million people — nearly half of whom arrived from elsewhere in Syria — in the region largely controlled by al-Qaida-linked fighters. It came as Russia, President Bashar Assad’s strongest military backer, announced major military drills in the Mediterranean Sea amid growing tensions over the enclave.

“Short of going to Turkey, the civilians have no other option in order not to be where fighting may take place,” de Mistura told reporters of the evacuation plan, which is in its early phases and will need to be discussed with regional players. Russia expressed openness to the idea.

The evacuation proposal reflected rising concerns that Idlib could become the site of the latest humanitarian disaster in a country that has faced many of them during a war that has killed over 400,000 people and driven more than 5.5 million to flee abroad.

De Mistura said a proposal would be a “temporary” measure so that “people can then return to their own places untouched once this is over.”

Ahmad Ramadan, a spokesman for the Syrian opposition’s delegation to U.N. talks with the government, called de Mistura’s proposal “unrealistic.”

“It’s very regrettable,” he said. “The special envoy’s role is not to call for a humanitarian corridor, but to call on Russia to stop the aggression.”

Idlib is the last remaining refuge for the Syrian opposition since President Bashar Assad’s forces began recapturing territory from rebels in 2015. The country has been consumed by war since demonstrations broke out against Assad in 2011.

Separately on Thursday, at a news conference in Moscow with Russian Foreign Minister Sergey Lavrov, Syrian Foreign Minister Walid al-Moallem said his government plans to “liberate” Idlib, but that its priority was “to negotiate peace with those who want to surrender.”

Al-Moallem said the government tried to negotiate with a so-called reconciliation committee in Idlib, but al-Qaida-linked militants arrested most of the committee members.

The militants have arrested over 500 people accused of trying to negotiate with the regime in recent weeks, according to Rami Abdurrahman, who heads the Britain-based Syrian Observatory for Human Rights monitoring group.

De Mistura said 10,000 al-Qaida-linked fighters and their families are located in the densely populated region, which is now home to 2.9 million people, many of them already displaced.

After hosting nine rounds of fruitless talks between the Syrian government and opposition, de Mistura has recently focused his efforts on talks with the so-called “guarantors” of the peace process: Russia, Turkey and Iran.

“We need to reduce the risk of unexpected escalation, and definitely look with great concern about any potential use of chemical weapons or any type of weaponized chlorine,” he said.

The U.S. State Department said Thursday the best way to protect the civilians in Idlib is for Russia to compel the Assad regime to avoid a military offensive.

“The regime’s past brutality in Aleppo, Ghouta, and southwest Syria, to include indiscriminate targeting of civilian areas, indicate that they cannot be trusted to protect civilians in any military offensive,” the statement said. “Their past gestures at humanitarian pauses and corridors have not reduced the suffering caused by Russian and regime attacks. In fact, more than a million of the civilians currently living in Idlib previously fled regime control.”

The U.S., Britain and France have warned they will respond to any use of chemical weapons in Syria.

Turkish President Recep Tayyip Erdogan said Thursday his country was engaged in talks with Iran and Russia to avoid a humanitarian calamity in Idlib. The leaders of Turkey, Iran, and Russia are slated to meet next week in Tabriz to discuss the mounting crisis.

The office of U.N. Secretary-General Antonio Guterres on Wednesday warned of the growing risk of a humanitarian catastrophe, and called for restraint.

De Mistura floated two options: one to not accelerate military escalation to allow more time for talks, and another to “allow and facilitate a credible — credible — humanitarian corridor to allow the civilian population to temporarily evacuate to a safer area.”

“But that area most likely is under government control,” he said. “So that requires a constructive, effective government support and a U.N. presence.” He said he could travel to the area himself to help monitor an evacuation.

“We definitely intend to discuss it very intensely with the government,” de Mistura said.

Russian Deputy Foreign Minister Mikhail Bogdanov told Russian news agencies that Moscow is willing to discuss “the details, the general idea and what practical solutions there are.”

It came shortly after Russia’s Defense Ministry told Russian news agencies that Russia will deploy 25 ships, including a missile cruiser, and 30 jets for the maneuvers in the first week of September. The military says the drills will focus on anti-air and anti-submarine defense.

The drills were announced after NATO reported a Russian naval buildup in the Mediterranean.