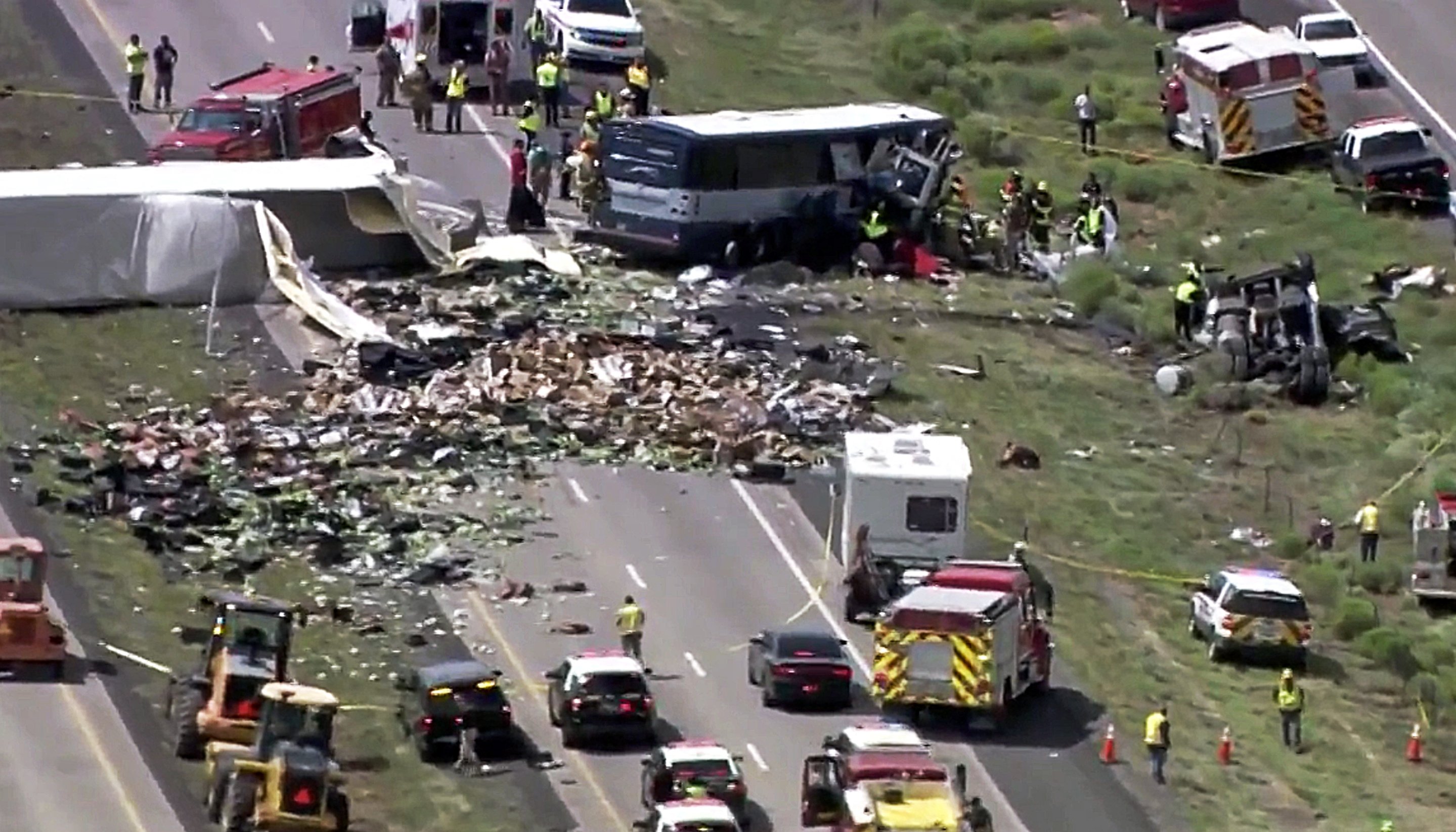 ALBUQUERQUE, N.M. — A blown tire on a semi-truck may be to blame for a deadly head-on crash with a commercial passenger bus along Interstate 40 in New Mexico near the Arizona border, according to authorities.

At least seven people were killed in the crash and many of the 49 passengers aboard the Greyhound bus were injured although authorities couldn’t immediately provide an exact count of how many were hurt or their conditions.

New Mexico State Police said the semi was headed east on the freeway Thursday afternoon when one of its tires blew, sending the rig across the median and into oncoming traffic where it slammed into the Greyhound bus heading to Phoenix from Albuquerque.

The National Transportation Safety Board and New Mexico state police are investigating.

At least nine bus passengers were being treated at University of New Mexico Hospital. UNM officials didn’t release any details about the patients’ conditions.

Passing motorists described a chaotic scene with passengers on the ground and people screaming.

Eric Huff was heading to the Grand Canyon with his girlfriend when they came across the crash.

Huff said the semi’s trailer was upside down and “shredded to pieces,” and the front of the Greyhound bus was smashed, with many of the seats pressed together. Part of the side of the bus was torn off, he said.

“It was an awe-inspiring terrible scene,” he said

Truck driver Santos Soto III shot video showing the front of the Greyhound sheared off and the semi split open, with its contents strewn across the highway.

He saw people sobbing on the side of the road as bystanders tried to comfort them.

“I was really traumatized myself, because I’ve been driving about two years and I had never seen anything like that before,” Soto said.

“I’m a pretty strong person and I broke down and cried for at least 30 minutes,” he added.

Chris Jones was headed west on Interstate 40 when he caught his first glimpse of the semi turned over. He saw the rest of the wreckage and stopped to help before coming across the driver of the semi sitting on the shoulder of the highway.

“It was intense,” Jones said.

He said the driver told him that one of his front tires had popped, forcing the truck to veer into oncoming traffic, where it struck the bus.

“We are fully cooperating with local authorities and will also complete an investigation of our own,” Greyhound spokeswoman Crystal Booker said in a statement.

The crash occurred near the town of Thoreau. It forced the closure of westbound lanes of the interstate and traffic was backing up as travelers were diverted.