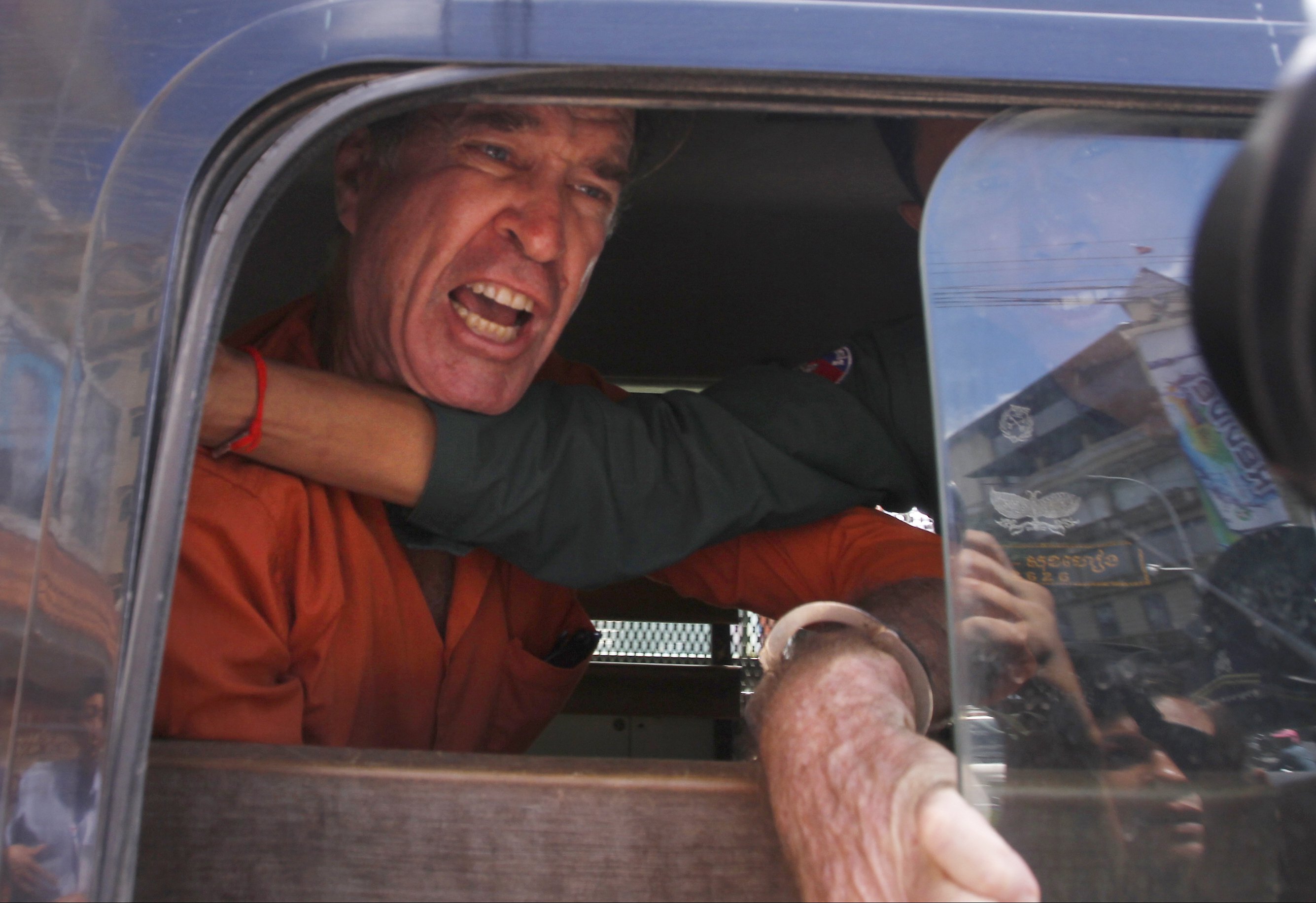 PHNOM PENH, Cambodia — An Australian filmmaker arrested after flying a drone to photograph a Cambodian opposition party rally last year was convicted of spying and sentenced to six years in prison Friday.

James Ricketson had faced up to 10 years in prison. Almost two dozen jailed critics or opponents of Prime Minister Hun Sen’s government had been freed in recent weeks following a sweeping ruling party election victory, which had raised hopes of leniency in Ricketson’s case.

Prosecutors have indicated he was suspected of working with the opposition party or had worked directly for a foreign power, though that country was never specified in court. The charge against him, endangering national security, was tantamount in legal terms to espionage.

As the prison van left after the panel of judges delivered the verdict, Ricketson shouted to reporters the same question he often raised throughout his trial: “Who am I spying for?’

Before hearing the verdict, he told The Associated Press that based on the evidence and facts in the case, he should be set free.

Ricketson, 69, repeatedly insisted he had no political agenda and his work making documentary films was journalistic in nature. Character witnesses testified to his filmmaking work and financial generosity to several poor Cambodians.

The evidence presented against Ricketson appeared thin, but Cambodia’s courts are considered highly politicized and their rulings often tightly align with the ruling party’s agenda. A handful of personal emails seized from Ricketson suggested he was sympathetic to the country’s political opposition and critical of Hun Sen’s government, but revealed no sensitive or secret information. Several of his photos and videos showed security forces on duty, but only in publicly viewable situations.

“Since he arrived in Cambodia, the accused person has been collecting political, social and economic information about Cambodia and sending it to a foreign state,” prosecutor Sieng Sok said in his closing argument Wednesday. “He has kept collecting this information for 22 years, until the day he was arrested. The accused person was using his journalism job and helping poor Cambodians just to hide his real work, but in fact he is a spy and has been filming at the sites of the country’s security forces.”

The prosecutors had indicated Ricketson also was suspected of working with the opposition Cambodian National Rescue Party, which for a time had enough popularity among Cambodians to be a viable challenger to Hun Sen’s rule. The party’s dissolution by a court ruling last year assured Hun Sen’s party of its sweeping victory in the July general elections, which returned Hun Sen to office for five more years.

Ricketson testified in his defense that he made contacts with the opposition party strictly for journalistic purposes while making a documentary film. He recounted a filmmaking career dating to the 1970s, and presented acclaimed Australian movie director Peter Weir to attest to his professionalism in the field.

Ricketson’s other character witnesses were several Cambodians, including his informally adopted daughter, who described how he had provided financial assistance to them and other poor members of Cambodian society.

Throughout his trial, Ricketson shouted brief but defiant remarks to reporters as he was led in and out of the court building for each hearing. He decried the paucity of evidence and repeatedly asked the taunting question of what country he was supposed to have been spying for.

At one point, however, he took a tried-and-true approach in trying to earn clemency by expressing contrition.

In a July 1 letter addressed to Hun Sen and published in a pro-government newspaper, he wrote: “May I please, respectfully, send my sincerest apologies to yourself and the Cambodian Government. I now realize that my statements I have made in the press and other media are disruptive and ill-informed. These statements were made from a place of foreign naivety and ignorance about the complexities and difficulties of governing Cambodia,” he wrote.

“I apologize unreservedly and without condition for any distress I may have caused as a result of my ignorance of Cambodian issues. If there is anything I can do to remedy my mistake, please let me know as I only want the best for you and Cambodia,” the letter said.