The Latest: Casket arrives at Capitol for McCain memorial 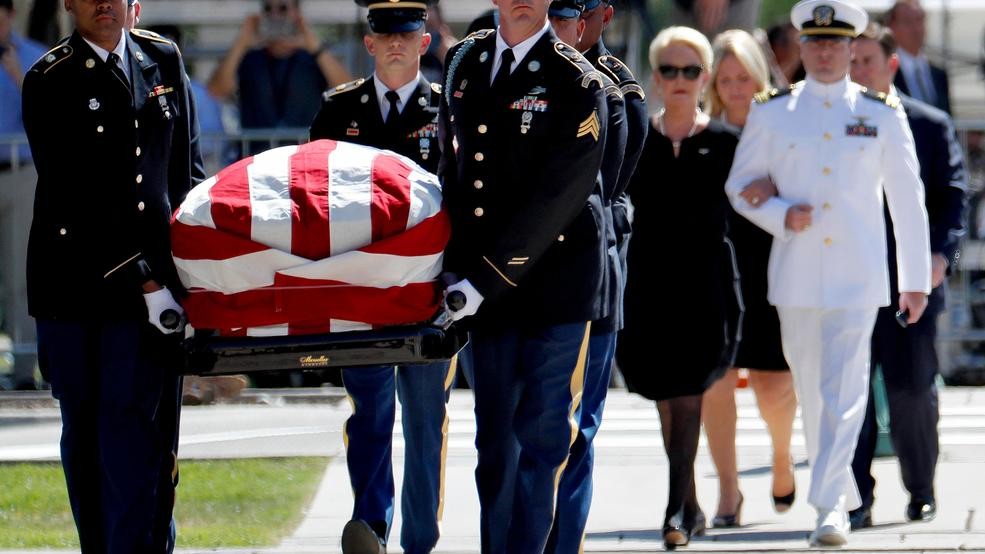 WASHINGTON — The Latest on memorial services for the late Sen. John McCain (all times local):

The hearse carrying the casket of John McCain has arrived at the Capitol as a memorial begins for the Republican senator.

McCain’s wife, Cindy McCain, and other members of his family watched from the steps of the East Plaza as his casket was carried into the Capitol.

Family, friends, lawmakers and other guests, including some celebrities, gathered in the Capitol’s Rotunda for the service. Congressional leaders are expected to deliver remarks.

It’s the first of two days of services honoring the Arizona senator in the nation’s capital where he served for more than 30 years in elected office.

It’s Washington’s turn to say goodbye to the late Sen. John McCain. And McCain is saying farewell — his way.

The six-term Republican senator from Arizona, who lived and worked in the nation’s capital over four decades, will lie in state under the U.S. Capitol rotunda Friday for a ceremony and public visitation.

On Saturday, McCain’s procession will pause by the Vietnam Memorial and head for Washington National Cathedral for a formal funeral service. At McCain’s request, two former presidents — Barack Obama and George W. Bush — are expected to speak there.

People close to the White House and McCain’s family say President Donald Trump has been asked to stay away from all events. During the presidential campaign, Trump mocked McCain for getting captured during the Vietnam War.