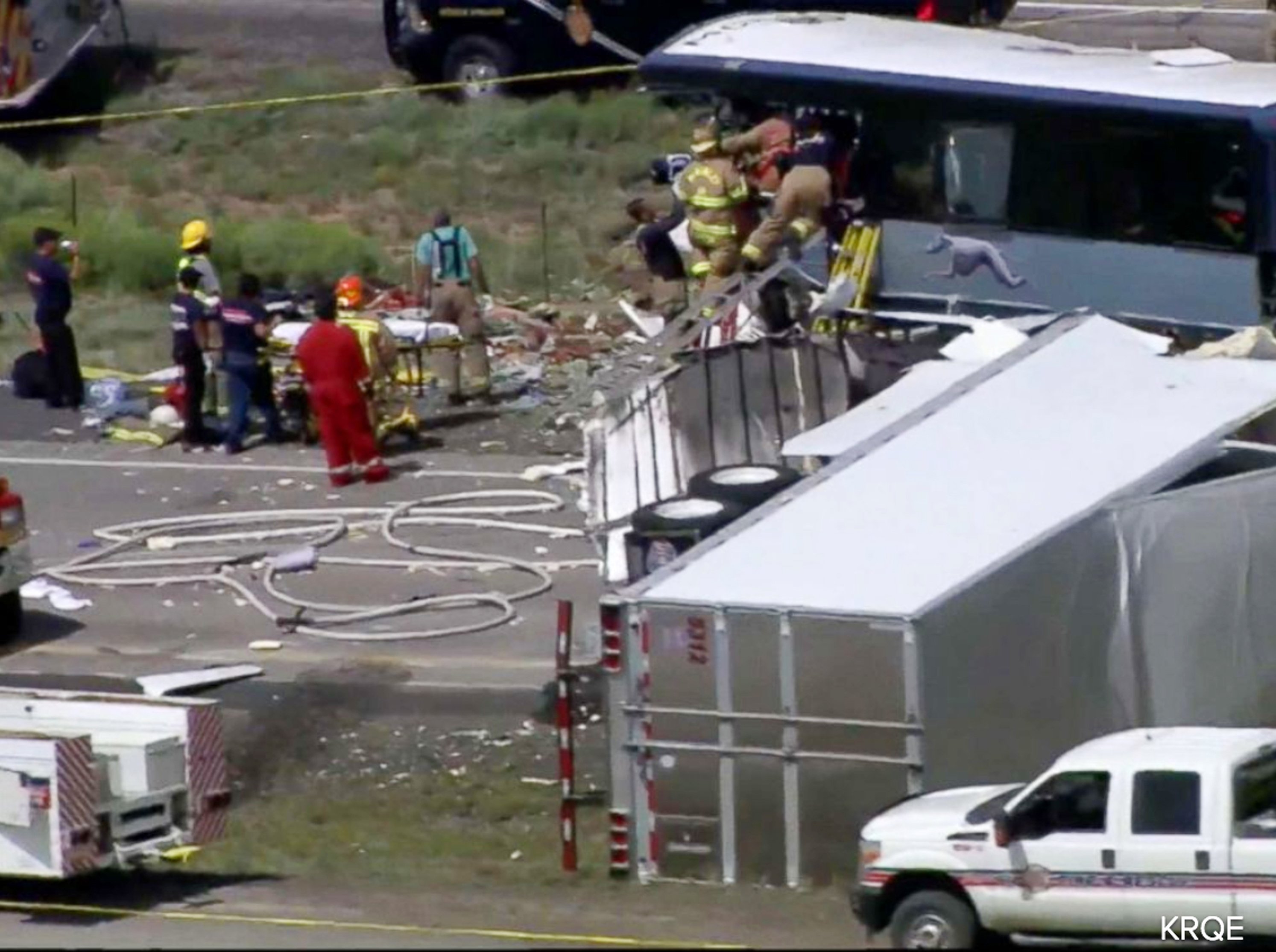 THOREAU, N.M. — The Latest on a commercial bus crash in New Mexico (all times local):

Both eastbound lanes of the highway also have reopened.

Preliminary information indicates a semi-truck traveling the opposite way had a blow-out and crashed head-on into the bus.

Greyhound says 49 passengers were aboard the bus, which was heading from Albuquerque to Phoenix.

At least nine passengers were being treated at an Albuquerque hospital. Officials did not release any details about the patients’ conditions.

Officials say nine passengers from a deadly head-on bus crash in New Mexico are being treated at an Albuquerque hospital.

Officials at University of New Mexico Hospital say they are expecting another three patients to be transported later Thursday.

Officials did not release any details about the patients’ conditions.

Authorities have said that people were injured in the crash along Interstate 40 but they have not provided an exact count. At least four people were killed.

Greyhound says 49 passengers were aboard the bus, which was heading from Albuquerque to Phoenix.

Preliminary information indicates a semi-truck traveling the opposite way had a blow-out and crashed head-on into the bus.

Authorities say preliminary information indicates a blown tire on a semi-truck is to blame for a head-on crash that killed at least four people and injured numerous others aboard a commercial passenger bus.

New Mexico State Police say the semi was headed east when one of its tires blew, sending the rig across the median and into oncoming traffic where it slammed into the Greyhound bus.

Police say a number of bus passengers were transported to hospitals with serious injuries.

They could not immediately say how many people were injured.

A motorist who came upon the scene described it as chaotic as passengers were on the ground and people were screaming.

A motorist says the scene of a deadly bus crash in New Mexico was chaotic, with people screaming, passengers on the ground, and debris scattered across an interstate highway.

Chris Jones said in a phone interview that he was headed west Thursday on Interstate 40 near the Arizona state line when he saw a semi-truck on its side.

Jones says he stopped to help and talked to the driver who told him that one of his front tires had popped, forcing the truck to veer into oncoming traffic, where it struck the bus.

Greyhound revised the number of passengers on the bus to 49, up from the 47 reported earlier. The company says it is cooperating with authorities and plans its own investigation.

The bus was headed from Albuquerque to Phoenix when the crash happened near Thoreau.

New Mexico State Police did not say how many people died or how many were injured in Thursday’s crash.

They said passengers were transported to a hospital and a phone number was set up for family members seeking more information about people who were aboard the bus.

The wreckage included a Greyhound bus with front-end damage and a semi-truck that was on its side and with its cargo strewn across the highway and the median.

Greyhound says the bus was heading from Albuquerque to Phoenix and there were 47 passengers on board.

The crash forced the closure of the westbound lanes of the interstate and traffic was backing up as travelers were being diverted.

Authorities did not release any other details, saying officers and rescue workers are still at the scene and that some passengers of the Greyhound bus were transported to a hospital in the area.

The McKinley County Office of Emergency Management set up a phone line for the family members of passengers who are looking for more information.

Images from the scene showed a semi-truck on its side and the bus with front-end damage. Debris from the semi also littered the area.

It was not immediately clear what caused the crash. Traffic was backed up along the interstate near the town of Thoreau as westbound lanes were blocked.

New Mexico State Police are reporting serious injuries among the passengers aboard a commercial bus that crashed along Interstate 40.

Authorities say police and rescue workers are on the scene but they did not provide details as to how many people were injured or what caused the crash. They said passengers are being transported to the hospital.

The crash happened Thursday afternoon near the town of Thoreau in western New Mexico. Traffic was being diverted as the westbound lanes of the interstate were closed due to the crash.