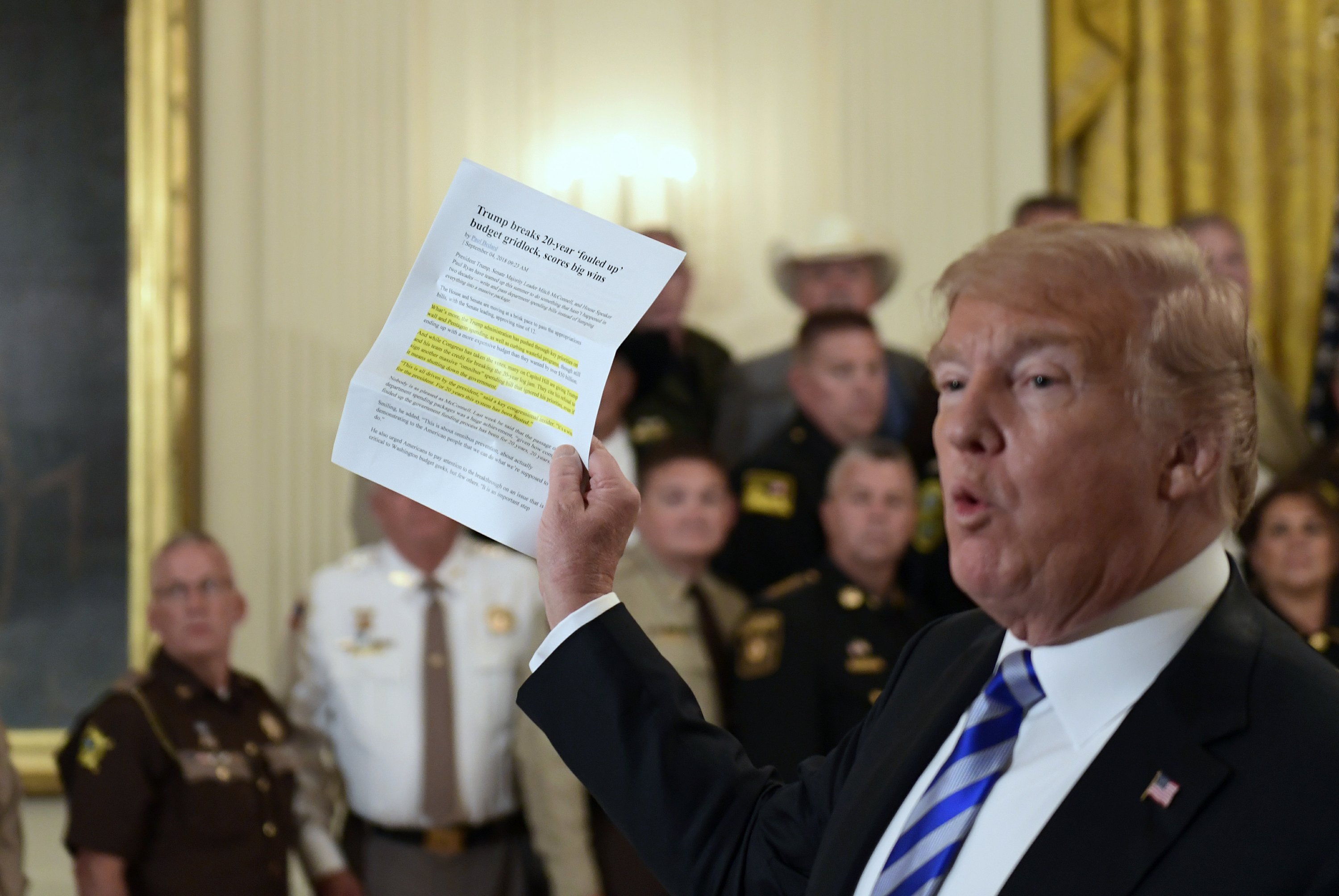 NEW YORK — The New York Times took the unusual step Wednesday of granting anonymity to a senior Trump administration official to write a searing column that said people who work for the president are trying to protect the country from his worst impulses.

The essay was published against the backdrop of a president who frequently rails against “fake news” and the “failing New York Times,” to the delight of many fans. White House press secretary Sarah Sanders called the decision a “new low” for the Times, saying the newspaper should apologize and the writer resign.

The column veered in tone between a hostage note and a bid to reassure Americans that, as the writer put it, “there are adults in the room.”

In introducing the piece, the newspaper said anonymity was granted at the request of the author, whose identity is known to the newspaper and whose job would be jeopardized by disclosure.

“We believe publishing this essay anonymously is the only way to deliver an important perspective to our readers,” the newspaper said.

While unusual, the move is not unprecedented. In June, the Times published a piece from an asylum seeker who was in a Trump administration family detention center, not identifying her because of gang-related threats she received. In 2014, a woman from Pakistan was not identified for writing an editorial page blog item to protect her from the Taliban.

But in Wednesday’s case, the person was from the highest reaches of the U.S. government.

“It’s extraordinary,” said Frank Sesno, director of the School of Media and Public Affairs at The George Washington University. “I have never seen anything like this. I can only imagine the conversations at the New York Times about publishing such a thing. If there’s any question about the role that journalism plays in a democracy, this puts it to bed.”

Sesno said the Times’ credibility is on the line “if this person turns out to be a window-washer somewhere.

“But there’s no way a responsible news organization would do that,” said Sesno, a former CNN Washington bureau chief. “I have to believe that the top people at the Times were part of this decision, because it was so unusual and so explosive.”

The decision was in the purview of James Bennet, editorial page editor, and James Dao, op-ed editor, with publisher A.G. Sulzberger weighing in, a Times spokeswoman said. The newspaper’s executive editor, Dean Baquet, was not involved because the news pages are his responsibility, and the column appeared in the Times’ opinion section.

That led to a Times reporter, Jodi Kantor, tweeting that “Times reporters must now try to unearth the identity of an author that our colleagues in Opinion have sworn to protect with anonymity?”

The author wrote that “there were early whispers within the Cabinet of invoking the 25th Amendment, which would start a complex process for removing the president. But no one wanted to precipitate a constitutional crisis.” That speaks to the writer either being in the White House or having access to people who are there regularly.

Kyle Pope, editor of the Columbia Journalism Review, said the decision was akin to the newspaper’s news pages protecting a source with anonymity.

“What’s different here is the scale of it,” he said. “I do think it’s a powerful statement. I wonder how the editorial side is keeping (the source’s identity) from the news side.”

He said it’s a situation in which the rules have to be made on the fly.

“If I was in this decision-making process, I would take the risk,” Pope said. “It’s a risk worth taking because the message is so powerful.”

Sanders said the administration was “disappointed, but not surprised, that the paper chose to publish this pathetic, reckless and selfish op-ed.” She called it another example of the liberal media’s effort to discredit Trump.

“The individual behind this piece has chosen to deceive, rather than support, the duly elected president of the United States,” Sanders said. “He is not putting country first, but putting himself and his ego ahead of the will of the American people. This coward should do the right thing and resign.”

While she identified the author as a “he,” the Times has not done so. The newspaper said that a tweet suggesting the author was male was sent in error.

“We are incredibly proud to have published this piece, which adds significant value to the public’s understanding of what is going on in the Trump administration from someone who is in a position to know,” said the newspaper’s spokeswoman, Eileen Murphy.

The article was a coup for the Times in its endless fight for supremacy with The Washington Post, coming a day after the Post published excerpts from an upcoming book on the Trump administration by Post legend Bob Woodward.

Some of what was written in the Times column, in fact, echoes material from Woodward’s book. The book said Defense Secretary James Mattis has purposely not acted on a presidential directive to assassinate Syrian leader Bashar al-Assad, and that former Trump economic adviser Gary Cohn once removed a document from the president’s desk that would have ended a trade deal with South Korea.

The Times column said that those working for Trump made sure sanctions were placed on Russia for poisoning a Russian spy in Britain, despite the president’s reluctance to do so.

“We fully recognize what is happening,” the anonymous author said. “And we are trying to do what’s right even when Donald Trump won’t.”