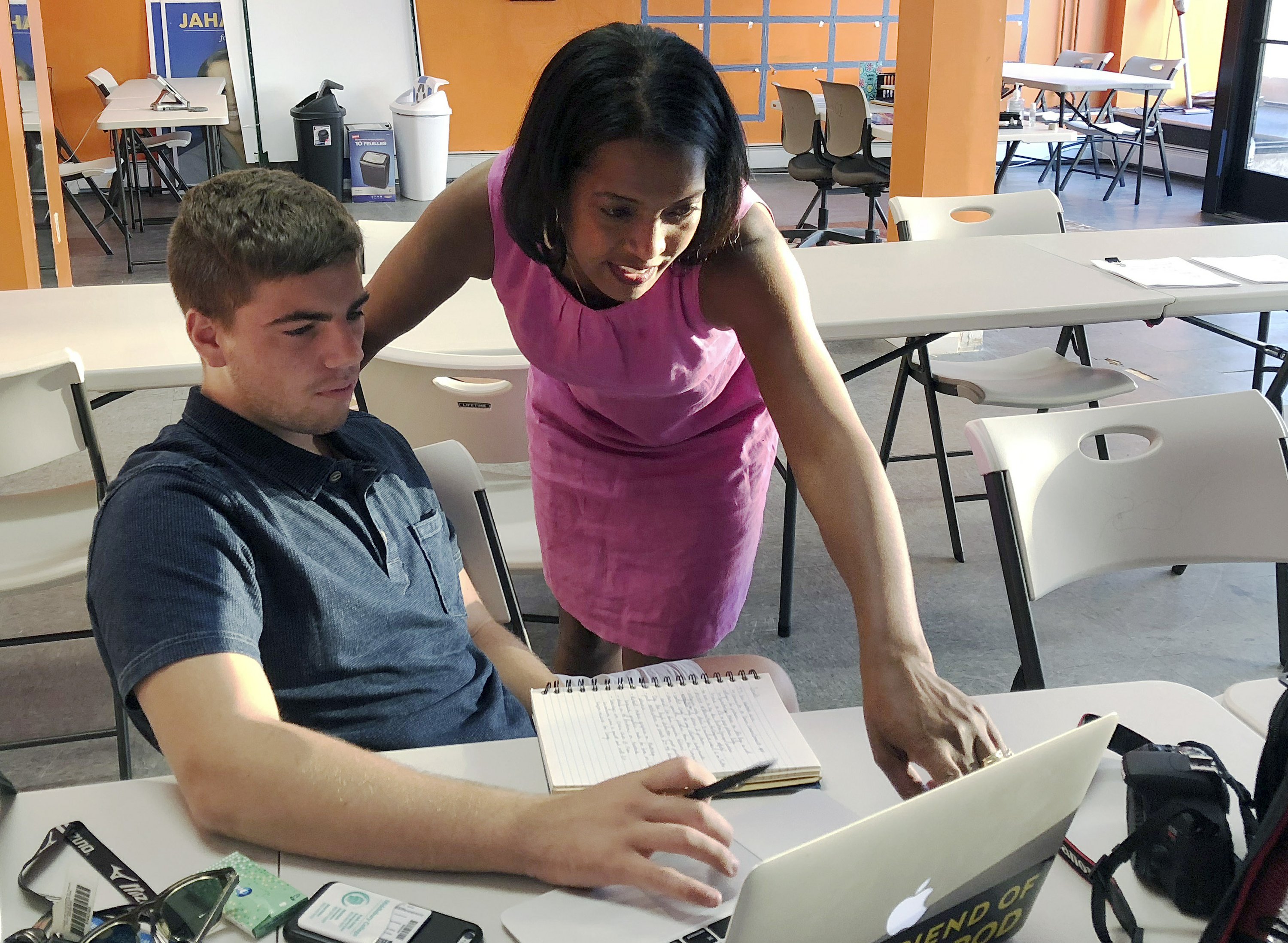 WATERBURY, Conn. — As she hits up the town fairs and parades across northwestern Connecticut, political newcomer Jahana Hayes is sharing her story of rising from poverty to the height of the teaching profession in her bid to become the state’s first black woman elected to Congress.

Hayes, the 2016 National Teacher of the Year, defeated a veteran politician in the Democratic primary last month, propelling her candidacy onto the national stage in a year when many voters are embracing non-traditional congressional candidates like Alexandria Ocasio-Cortez in New York and Ayanna Pressley in Massachusetts.

“A lot of it is very personal to me. I know what it was like to be unemployed, underemployed, homeless, homeowner, single mom, married professional,” she told The Associated Press in an interview. “I think everything in my life has positioned me to be exactly where I am. I wouldn’t change a thing about it.”

Hayes, 45, is running for the seat being vacated by U.S. Rep. Elizabeth Esty, a Democrat who chose not to seek re-election after being criticized for her handling of a sexual harassment case in her office.

Hayes faces Republican Manny Santos, a former mayor of Meriden and an analyst with the United Health Group. He currently trails Hayes in fundraising and says it’s been a challenge going up against attention paid to Hayes and her life story, even though he has own compelling personal narrative as a poor immigrant from Portugal who became a U.S. Marine.

“Her story is getting out there because she has the money to spend on commercials and messaging,” said Santos, who doesn’t expect much, if any, financial help from national Republicans, even though the 5th Congressional District is considered competitive for the GOP. “When I’m out there campaigning, I don’t particularly talk about myself. I would much rather talk about someone else’s issues and what they’re concerned with and how I might be able to help them.”

Santos supports President Donald Trump’s agenda of lower taxes and stronger immigration enforcement. He said Hayes’ campaign is about “touching the emotions of people” and is “lacking in substance and policy.”

Hayes, who defeated former Simsbury First Selectman Mary Glassman in the primary, is competing in a year when Democratic voters have rewarded diversity and youth, including the candidacies of Stacey Abrams for Georgia governor and Andrew Gillum for Florida governor.

Her story of overcoming so much personal adversity also has resonated with voters she has met since the primary at events like the Goshen Fair and the Newtown Labor Day parade. Hayes said she has received letters from single mothers who say she’s inspired them to return to school or vote for the first time.

Hayes grew up in Waterbury’s Berkeley Heights, which was considered one of the city’s most violent housing projects. Her mother struggled with drug addiction. Hayes became pregnant at 17 and considered dropping out of school, despite being a good student. She said public education and people in the system saved her life. She ultimately enrolled in community college and went on to earn her bachelor’s and advanced degrees.

A mother of four, Hayes is married to a detective in the Waterbury Police Department. The day after winning the primary, she was back at work, planning an orientation session for 112 new teachers entering the Waterbury Public Schools system.

“I didn’t campaign full-time until the two weeks leading up to the primary. That was my summer vacation,” said Hayes, who is the school district’s talent and professional development supervisor, a job she took on after winning the national award for her work as a high school history teacher. “I can’t quit my job. I mean, I have a son who just started college last week.”

U.S. Sen. Chris Murphy, a Democrat who encouraged Hayes to run, got to know her when she was named Connecticut Teacher of the Year and later National Teacher of the Year. He still remembers her “tour de force performance” at the White House, when she excitedly introduced President Barack Obama.

“I remember thinking, as I watched her up on stage, she was just a natural at public presentation,” he said. “She clearly had a gift to be able to translate really important, difficult topics amidst an authenticity that is pretty rare to find.”

After traveling the nation and overseas for a year-and-a-half as the National Teacher of Year, Hayes said she decided to run for public office. She refers to Trump infrequently on the campaign trail, but she said she is concerned by his policies and “the hollowing out” of the institutions and government programs that helped her succeed.

“I thought I was doing my part,” she said. “But all of a sudden, it seemed like what I was doing was not enough.”