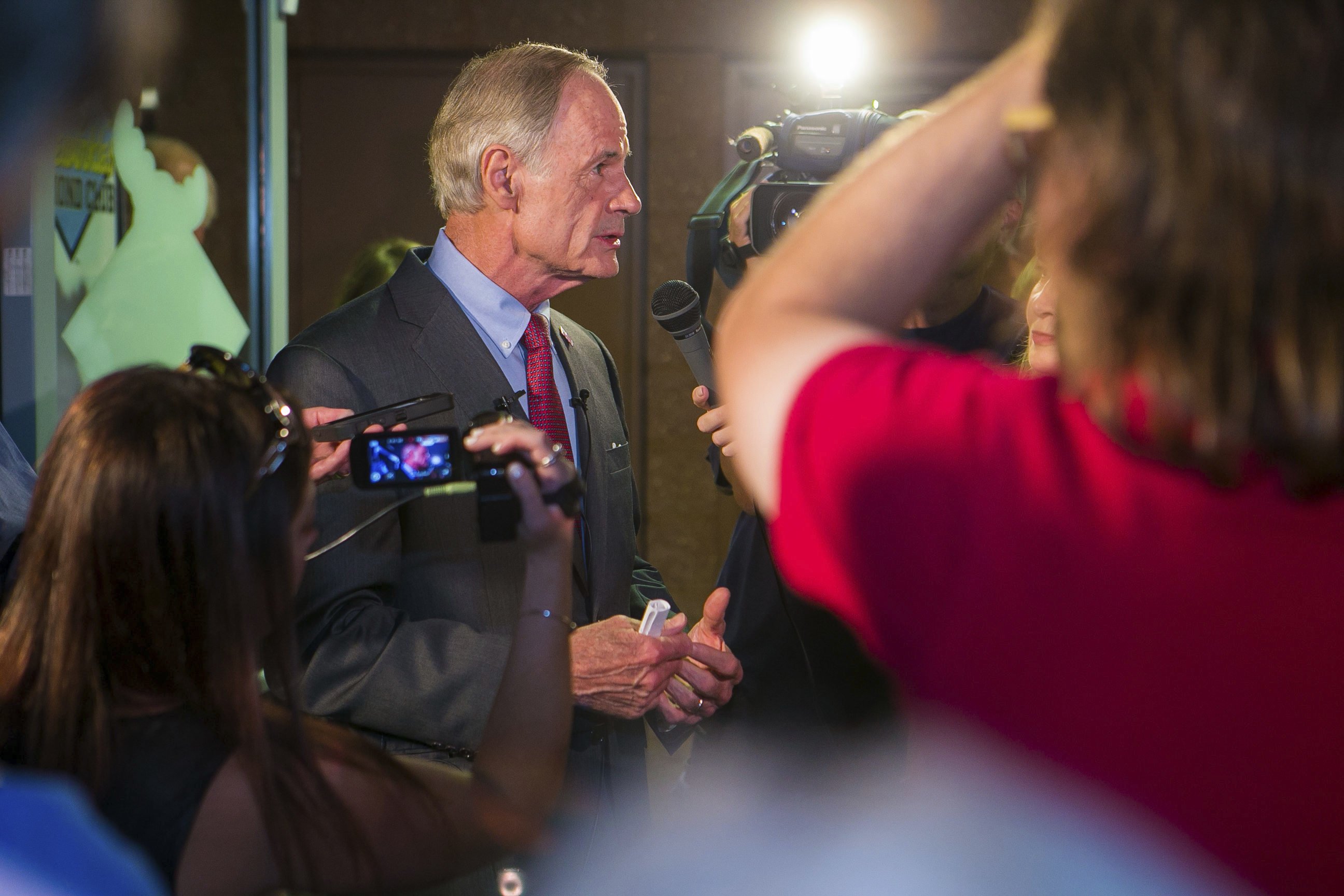 DOVER, Del. — Incumbent Tom Carper won Thursday’s Democratic U.S. Senate primary in Delaware, easily fending off a challenge from a political newcomer who had hoped to become the latest liberal candidate to score an upset against a powerful legislator.

“This is not the finish line,” Carper told a crowd of about 60 supporters, including Democratic Gov. John Carney, in declaring victory. “This was a good solid win.”

Carper, 71, won by nearly 30 percent over Kerry Evelyn Harris, who was part of a wave of young activists emboldened by the 2016 presidential campaign of U.S. Sen. Bernie Sanders of Vermont.

Eying a fourth term in the Senate, Carper touted his experience and his ability to work with lawmakers from both sides of the aisle in Congress, despite being a vocal Trump critic. He served five terms in the U.S. House and two terms as governor before being elected to the Senate in 2000.

“I’m happy with how things are going here in the state,” said Jim Williams, 39, who works in the financial services industry and voted for Carper. “I think he represents us well, and I didn’t see a need for change.”

Carper had a huge advantage over Harris in fundraising, having raised more than $1.3 million this year, compared to a little more than $120,000 reported by Harris as of mid-August. He outspent her by a similar margin.

Harris, a black, gay Air Force veteran, ran on a platform including government-paid health care for all, a $15 an hour minimum wage and abolition of the federal Immigration and Customs Enforcement agency. She tried to paint Carper as an out-of-touch, career politician beholden to corporations and their political action committees.

She had hoped to follow the success of Alexandria Ocasio-Cortez, who beat a 10-term incumbent in a New York congressional primary in June, Tallahassee Mayor Andrew Gillum, who won Florida’s Democratic gubernatorial primary, and Boston City Councilor Ayanna Pressley, who beat an incumbent in a Massachusetts primary this week.

“We’re going to just keep pushing against the machine,” Harris said. “Our voices are louder than ever, and we are not going to sit silent whenever we see any injustices.”

Carper congratulated Harris for running a good race and inspiring young people to get energized and involved.

“We need to reunite as a party,” he said. “We need to keep in mind that we are not one another’s enemies.”

Carper beat his 2012 general election opponent by 37 points, suggesting a difficult race for Arlett, the 51-year-old owner of a real estate business in southern Delaware. Arlett has served on the Sussex County council since 2015.

During the Senate campaign, Arlett touted his support of Trump’s “America First” agenda and his socially conservative positions, including opposition to abortion and gay marriage. He reminded GOP voters that Truono is openly gay and in a same-sex marriage.

“I’m married to a woman and he is not,” Arlett replied when asked by a newspaper reporter just days before the election to describe the biggest contrast between him and Truono.

Arlett also tried to paint Truono, who changed his political registration from unaffiliated to Republican a year ago before announcing his Senate bid, as a “party crasher.”

Arlett has said he would work in Washington to remove burdensome regulations on businesses, improve border security and fight for free and fair trade.

He also has called for repeal of the Affordable Care Act and the defunding of so-called “sanctuary cities.”