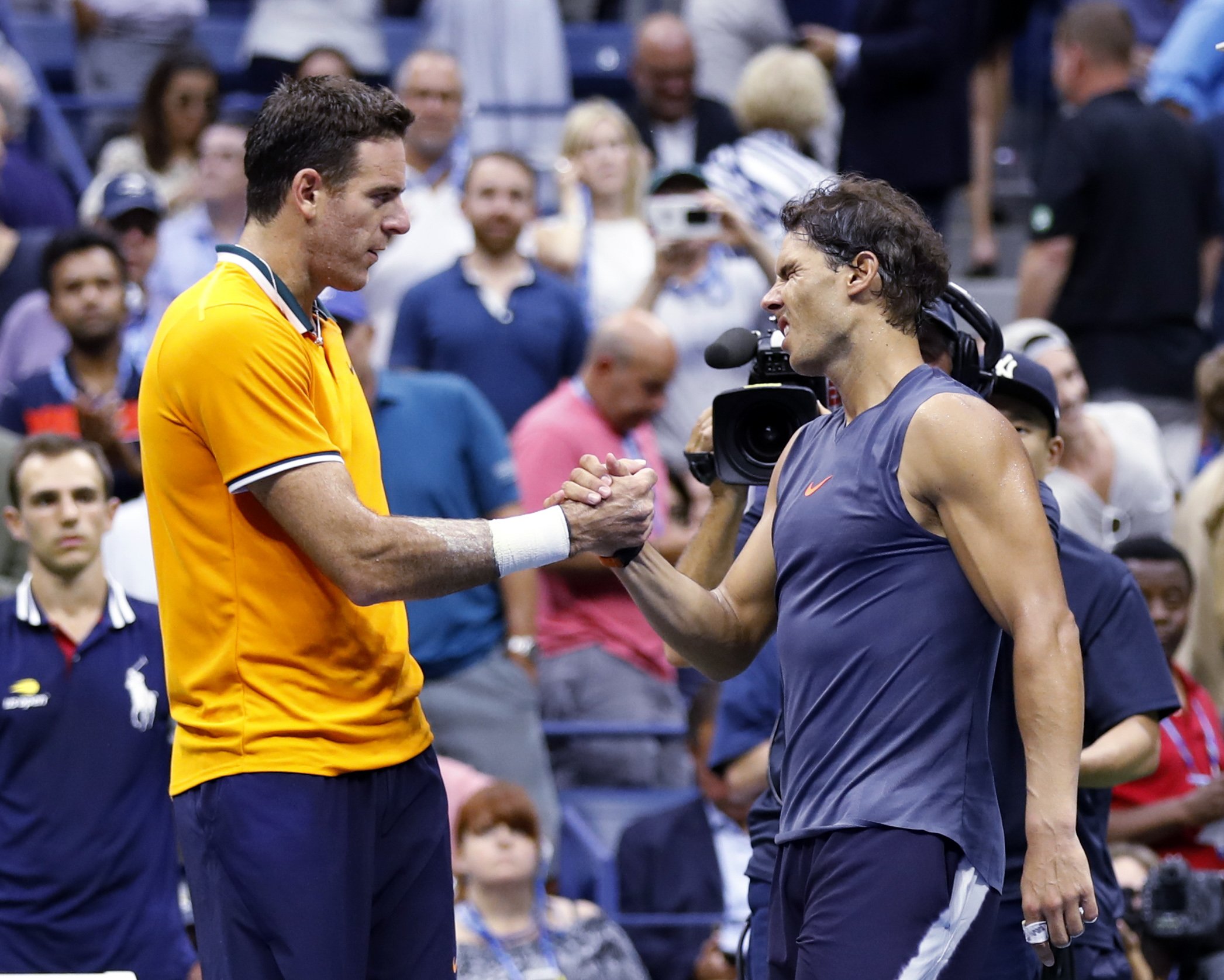 NEW YORK — Rafael Nadal felt the pain sear into his right knee early in his U.S. Open semifinal, on what he called “a bad movement.” It was a familiar pain, one that he’s dealt with off-and-on for years.

The defending champion looked up at his guest box and indicated something was wrong. He tried to continue. Eventually, he could not.

Nadal stopped playing after dropping the opening two sets Friday night, putting Juan Martin del Potro back in a Grand Slam final for the first time since winning the 2009 title at Flushing Meadows.

“That was not a tennis match at the end. Just one player playing, the other staying on one side of the court,” Nadal said. “I hate to retire, but staying one more set out there, playing like this, would be too much for me.”

“Of course, it’s not the best way to win a match,” said del Potro, who hugged Nadal when it was over. “I don’t like to see him suffering on court today. So I’m sad for him.”

The No. 1-seeded Nadal has a history of tendinitis in his knees, and he’s often cited that when withdrawing from tournaments. He was visited by a trainer at the changeover after the match’s seventh game and tape was applied below the joint.

At the next changeover, though, Nadal pulled off the tape.

After the third game of the second set, he had a medical timeout so the trainer could massage his right leg and once again apply tape.

But Nadal’s movement was clearly limited and by the end he was walking with a bit of a hitch in his gait between points. At one juncture, he approached the chair umpire to complain about a late call from a line judge and mentioned in passing that he was going to have to quit. Soon enough, he did just that.

Nadal said he didn’t know what kind of effects might have been lingering from his quarterfinal victory over Dominic Thiem, which lasted five sets and nearly five hours. But he had some knee issue earlier in the tournament, when he had it taped during his win against Karen Khachanov in the third round.

For del Potro, it was an odd way to return to an important summit. Nine years ago, he stunned Nadal in the semifinals, then Roger Federer in the final, to win the U.S. Open at age 20. He was considered a rising star at the time, but a series of wrist operations — one on his dominant right arm, and three on his left — slowed his career and kept him out of 2½ years’ worth of major tournaments.

“It means a lot to me,” del Potro said. “I didn’t expect to get in another Grand Slam final.”

On Sunday, the powerful Argentine with the massive forehand that zips along at more than 100 mph (160 kph) will face two-time U.S. Open champion Novak Djokovic or 2014 runner-up Kei Nishikori. They were meeting in the second semifinal Friday night.

Djokovic entered the day with a 13-match winning streak against Nishikori.

All four semifinalists were past finalists at Flushing Meadows, the first time that’s happened at the U.S. Open since 2011.

After nearly two weeks of heat in the 90s, it cooled to the 70s on Friday, although the humidity was still at about 70 percent. The lights in Arthur Ashe Stadium were on for the start of Nadal vs. del Potro, and they engaged in some terrific shotmaking during the first set.

A group of about a dozen fans from Argentina would salute important points won by their guy, often breaking into choruses of “Ole, ole, ole, ole, del Po, del Po!” Thousands in the crowd would lend their voices to the song; yet others would try to drown them out with support for Nadal.

When Nadal missed a forehand wide, then put a backhand into the net, the opening set belonged to del Potro, who shook his fist and yelled, “Vamos!”

As del Potro continued slamming serves at faster than 130 mph (210 kph), whipping that trademark forehand, and even making hay with his much-improved two-handed backhand, Nadal offered less and less resistance. It was clear something was wrong. He even barely took any time between points while serving — and he’s known as one of the slowest guys on tour.

Afterward, he couldn’t say for sure how long he might be sidelined. Could be a week. Could be months. No way to know yet.

All that was certain at that point was that his bid for a fourth U.S. Open title, and second in a row, was gone. As was his try for an 18th Grand Slam trophy overall as he tries to catch up to Federer’s 20, the record for men.

This one goes into the books as a loss, only his fourth in 49 matches in 2018. As Nadal himself noted during a news conference that closed as he began to choke up, this was the second of those defeats that involved him quitting during a Grand Slam match because of an injury; the other was in the fifth set of his Australian Open quarterfinal against Marin Cilic.

To be sure, del Potro knows that sort of setback, given all of his health woes.

“He’s a player that went through lot of issues during his career, like me, too. I know how tough is this thing. I know how much frustration (there) can be when you can’t do the thing that you want to do,” Nadal said. “He knows very well.”