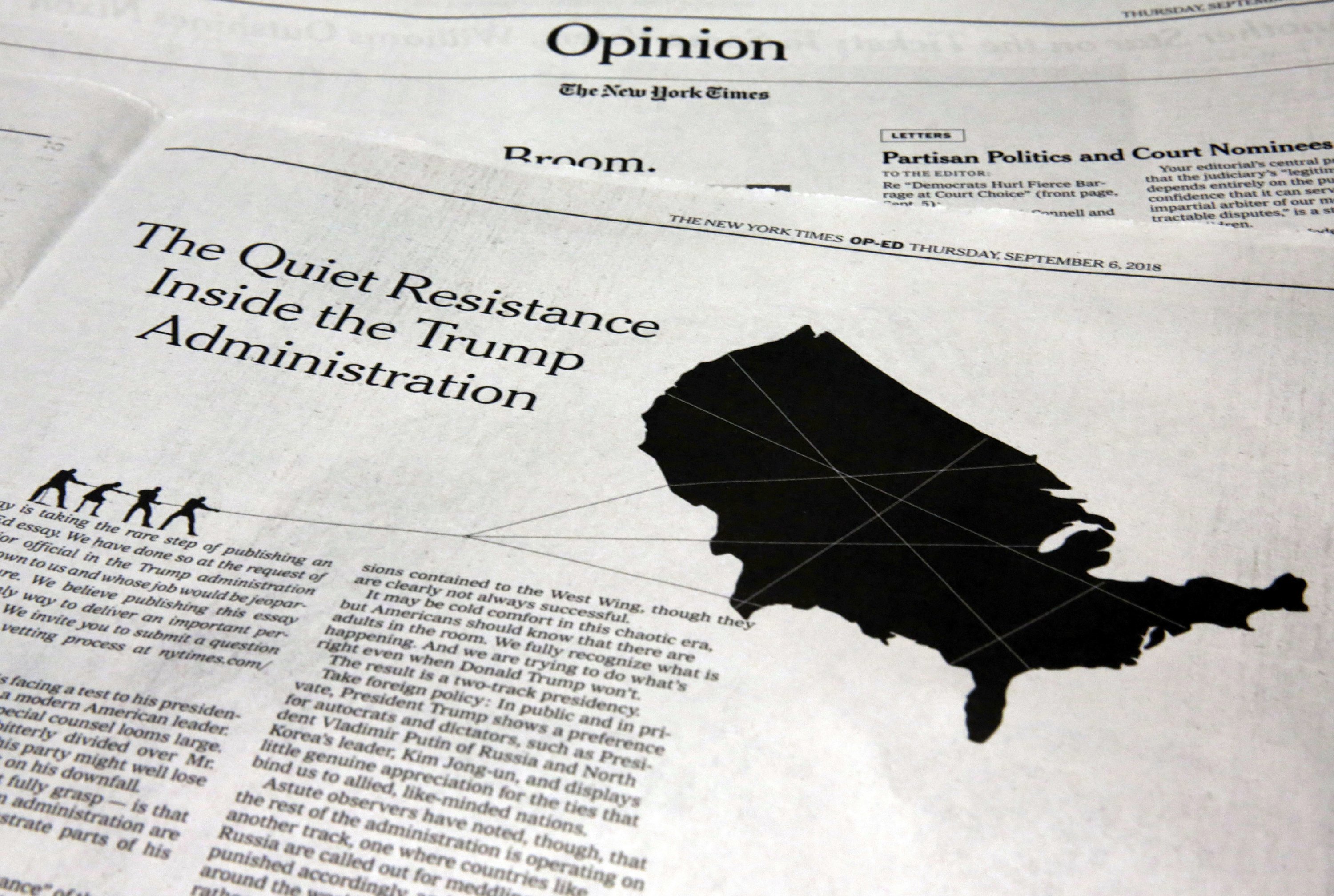 NEW YORK — The coup of publishing a column by an anonymous Trump administration official bashing the boss could backfire on The New York Times if the author is unmasked and turns out to be a little-known person, or if the newspaper’s own reporters solve the puzzle.

Within hours of the essay appearing on the paper’s website, the mystery of the writer’s identity began to rival the Watergate-era hunt for “Deep Throat” in Washington, and a parade of Trump team members issued statements Thursday saying, in effect, “it’s not me.”

The Times’ only clue was calling the author a “senior administration official.” James Dao, the newspaper’s op-ed editor, said in the Times’ daily podcast that while an intermediary brought him together with the author, he conducted a background check and spoke to the person to the point that he was “totally confident” in the identity.

How large the pool of “senior administration officials” is in Washington is a matter of interpretation.

It’s a term used loosely around the White House. Press offices often release statements or offer background briefings and ask that the information be attributed to a senior administration official.

The Partnership for Public Services tracks approximately 700 senior positions in government, ones that require Senate confirmation. Paul Light, a New York University professor and expert on the federal bureaucracy, said about 50 people could have legitimately written the column — probably someone in a political position appointed by Trump.

He suspects the author is in either a Cabinet-level or deputy secretary position who frequently visits the White House or someone who works in the maze of offices in the West Wing.

Jennifer Palmieri, former communications director for Hillary Clinton’s 2016 presidential campaign, tweeted that, based on her experience with the Times and sourcing, “this person could easily be someone most of us have never heard of and more junior than you’d expect.”

That would be a problem for the Times, partly through no fault of its own, said Kathleen Hall Jamieson, communications professor and director of the Annenberg Public Policy Center at the University of Pennsylvania. The column attracted so much attention — as much for its existence as for what it actually said — that it raised the expectation that the author is someone powerful, she said.

If the person is not among the 20 top people in the administration, “the Times just gets creamed,” said Tom Bettag, a veteran news producer and now a University of Maryland journalism instructor. “And I think it gets held against them in the biggest possible way. I have enough respect for the Times to believe that they wouldn’t hold themselves up to that.”

It would look like the Times was trying to stir the pot if it were not a high-level person, said Chuck Todd, host of NBC’s “Meet the Press.”

Ruth Marcus, deputy editorial page editor of The Washington Post, told Todd on MSNBC that if the author had come to the Post it would provoke a serious discussion, because the newspaper has not in the past run anonymous op-ed columns. She said no one approached the Post to hawk the column.

“When you give someone anonymity on this, you are putting your credibility on the line,” Marcus said.

News organizations have different standards for using information from unnamed sources. Frequently, they try to give some indication of why the person would be in a position to know something — the senior administration official, for example — and why anonymity was granted. In this case, the newspaper considered that the person’s job would clearly be at risk and that the person could even be physically threatened, Dao said.

He did not see much difference in the use of anonymity in news and opinion pages.

The Times has long been a target of President Donald Trump’s vitriol. He criticized the newspaper for printing the column and said the Times should reveal its source for reasons of national security.

“There’s nothing in the piece that strikes me as being relevant to or undermining the national security,” Dao said.

The newspaper maintains a strict policy of separation between its news and opinion side, and the decision to publish the column without identifying the author was made by Dao and his boss, Editorial Page Editor James Bennet, in consultation with Publisher A.G. Sulzberger. The paper’s executive editor, Dean Baquet, is responsible for the news side and was not part of the decision.

Few people at the paper know the writer’s identity, Dao said, and he could not see any circumstances under which it would be divulged.

The Times’ own news story about the column said the author’s identity is “known to the Times’ editorial page department but not to the reporters who cover the White House.”

Trump, in a tweet Thursday evening, posed the question: “Are the investigative ‘journalists’ of the New York Times going to investigate themselves – who is the anonymous letter writer?”

Indeed, like hundreds of other reporters in Washington, the Times’ news staff is trying to find out the writer’s name. If the Times learns the identity, it could raise serious questions about the newspaper’s ability to protect a confidential source among people who don’t know — or don’t believe — that one part of the newspaper will keep important information away from another.

“You could write a novel about this,” said Jamieson, author of the upcoming “Cyberwar: How Russian Hackers and Trolls Helped Elect a President.” ”If they engage in successful journalism, at some level they discredit themselves.”