The Latest: WTA will look into Williams, umpire dispute 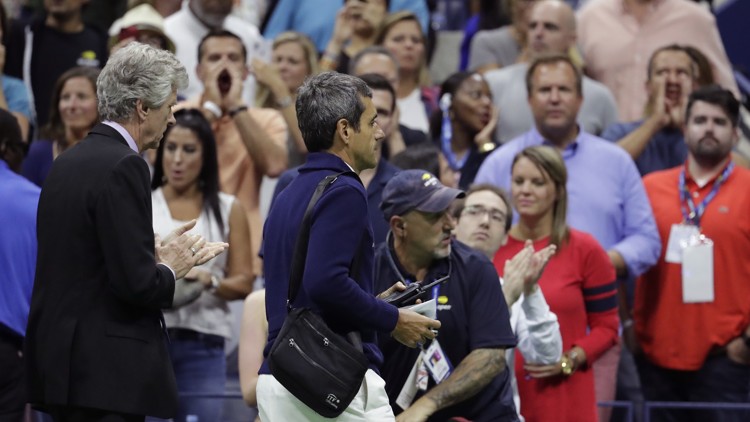 NEW YORK — The Latest on the U.S. Open tennis tournament (all times local):

The WTA says it will look into the dispute between Serena Williams and chair umpire Carlos Ramos.

Williams was penalized a game for calling the chair umpire a thief during an extended argument as the U.S. Open women’s final. Williams clashed with chair umpire Carlos Ramos, demanding an apology after he initially issued a warning for a code violation in the second set’s second game for receiving coaching, which is not allowed during Grand Slam matches.

“There are matters that need to be looked into that took place during the match,” the WTA said in a statement.

Naomi Osaka won the U.S. Open to become the first Grand Slam champion from Japan, beating Serena Williams 6-2, 6-4 after the American was penalized one game for a third code violation.

Williams was given three code violations by chair umpire Carlos Ramos, the third leading to an automatic loss of a game in the second set.

Serena Williams was given a second violation, this one for smashing her racket, and again yelled at the chair umpire who had given her a first warning for coaching.

The second code violation cost Williams a point, meaning Naomi Osaka had a 15-0 even before hitting her first serve in the sixth game of the second set.

Williams had been given a first violation by Carlos Ramos for coaching earlier in the set, telling him that she’d “rather lose” than cheat.

She resumed that argument after the second violation, still angry about the first violation. She unwrapped a new racket and then took the court to argue again some more about coaching.

“You owe me an apology,” she said. “I have never cheated in my life!”

Serena Williams angrily responded to a code violation for coaching by telling the chair umpire that she’d “rather lose” than cheat.

Williams was given the violation by Carlos Ramos of Portugal in the second game of the second set while Naomi Osaka was serving.

Williams approached the chair and told Ramos that she was not being coached but rather being given a thumbs up from her box, which she said she not have been a violation.

Naomi Osaka has won the first set over Serena Williams in the U.S. Open women’s final, 6-2.

It was another dominant start for the 20-year-old native of Japan, who has dropped just one set en route to her first Grand Slam final. She has lost only 30 games in her seven matches.

Williams, who will turn 37 later this month, would break her own record for the oldest Grand Slam women’s champion. Osaka, 20, would become the youngest U.S. Open champion since Maria Sharapova was 19 in 2006.

Serena Williams and Naomi Osaka will play the U.S. Open women’s final with the roof closed at Arthur Ashe Stadium.

Tournament officials announced that because of a high probability of rain from the afternoon through evening, the roofs at Ashe and Louis Armstrong Stadium had been closed and would stay that way for the remainder of Saturday’s play.

Matches on outer courts that were affected by rain were to be moved indoors.

She’ll be the first woman to ump a men’s singles final since Eva Asderaki-Moore chaired Djokovic vs. Roger Federer in 2015.

Of the five main draw finals, four will have been chaired by a female umpire this year.

Murray won last year with Martin Hingis and she was in the box Saturday to cheer the doubles team at Arthur Ashe Stadium. Murray became the first man to win consecutive U.S. Open mixed doubles titles since Bob Bryan in 2003 and 2004.

The 32-year-old Murray, brother of former Wimbledon and U.S. Open champion Andy Murray, played with Mattek-Sands for the first time in the tournament. Mattek-Sands has also won mixed doubles Grand Slam titles at the Australian Open and the French Open. Murray had three other Grand Slam mixed doubles titles.

Rosolska and Mektic also played together for the first time in what was the first all-unseeded doubles final at the U.S. Open since 2009.

Murray and Mattek-Sands received $155,000 for winning the championship.

A year after giving birth, Serena Williams has made a memorable run to another U.S. Open final, where she will play first-time finalist Naomi Osaka of Japan on Saturday with a chance to win a record-tying 24th Grand Slam singles title.

Williams lost in the Wimbledon final, but has given herself another chance even faster than perhaps she could have imagined last September. She had four operations following the birth of her daughter, Olympia.

Williams has won six of her 23 major titles in New York, and with a victory would equal Margaret Court’s record. On the other side, the 20-year-old Osaka could be the first Grand Slam singles champion from Japan and the youngest women’s champion at the U.S. Open since Maria Sharapova was 19 in 2006.

Williams hasn’t won the U.S. Open since 2014 and hasn’t won anywhere since the 2017 Australian Open, when while pregnant she became the oldest Grand Slam female champion at 35.