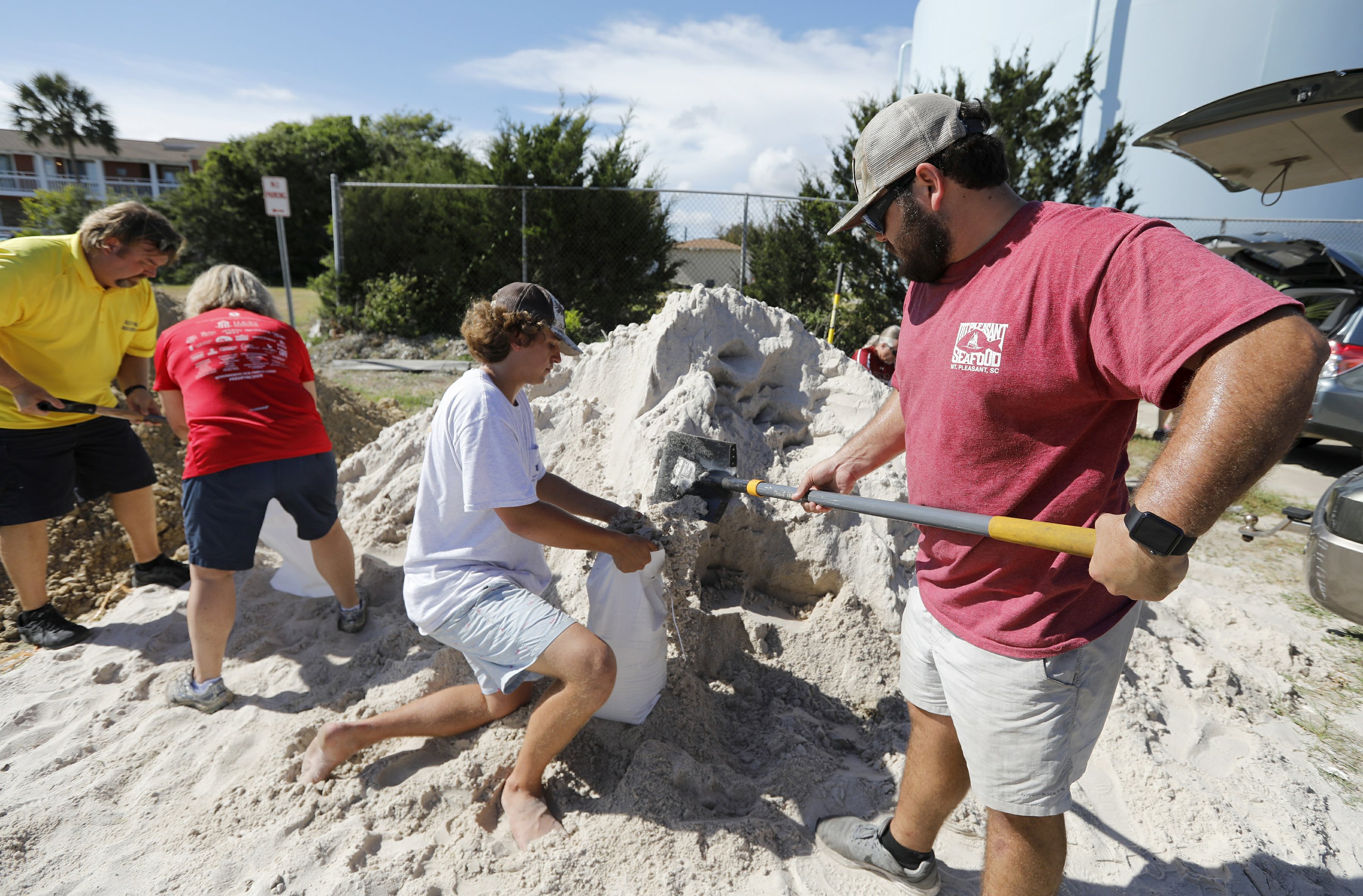 RALEIGH, N.C. — With mandatory evacuations already issued for parts of three East Coast states, millions of Americans are preparing for what could become one of the most catastrophic hurricanes to hit the Eastern Seaboard in decades.

Carrying winds of up to 140 mph (220 kph) as a Category 4 storm, Hurricane Florence is expected to strengthen and possibly becoming a Category 5 storm Tuesday. It’s then forecast to close in on North or South Carolina on Thursday, hitting a stretch of coastline that’s vulnerable to rising sea levels due to climate change.

South Carolina’s governor ordered the state’s entire coastline to be evacuated starting at noon Tuesday and predicted that 1 million people would flee. And Virginia’s governor ordered a mandatory evacuation for some residents of low-lying coastal areas, while some coastal counties in North Carolina have done the same.

The storm’s first effects were already apparent on barrier islands as dangerous rip currents hit beaches and seawater flowed over a state highway.

For many people, the challenge could be finding a safe refuge: If Florence slows to a crawl just off the coast, it could bring torrential rains to the Appalachian mountains and as far away as West Virginia, causing flash floods, mudslides and other dangerous conditions.

Airlines, including American and Southwest, have started letting passengers change travel plans that take them into the hurricane’s possible path.

National Hurricane Center Director Ken Graham warned that Florence was forecast to linger over the Carolinas once it reaches shore. People living well inland should prepare to lose power and endure flooding and other hazards, he warned.

“It’s not just the coast,” Graham said. “When you stall a system like this and it moves real slow, some of that rainfall can extend well away from the center.”

A warm ocean is the fuel that powers hurricanes, and Florence will be moving over waters where temperatures are peaking near 85 degrees (30 Celsius), hurricane specialist Eric Blake wrote. And with little wind shear to pull the storm apart, Florence’s hurricane wind field was expected to expand over the coming days, increasing its storm surge and inland wind threats.

By 11 p.m. Monday, Florence was centered about 1,085 miles (1,745 kilometers) east-southeast of Cape Fear, North Carolina, and moving west at 13 mph (20 kph). Its center will move between Bermuda and the Bahamas on Tuesday and Wednesday and approach the coast of South Carolina or North Carolina on Thursday, the National Hurricane Center said.

Two other storms were spinning in the Atlantic. Hurricane Isaac was expected to lose strength as it reaches the Caribbean, and Helene, much farther out to sea, may veer northward into the open ocean as the 2018 hurricane season reaches its peak.

In the Pacific, Hurricane Olivia triggered warnings for multiple Hawaiian islands as it blew west toward an arrival over the state as soon as late Tuesday or early Wednesday.

Preparations for Florence were intensifying up and down the densely populated coast. Since reliable record-keeping began more than 150 years ago, North Carolina has been hit by only one Category 4 hurricane: Hazel, with 130 mph winds, in 1954.

The parking lot has been full for three days at the Ace Hardware store in coastal Calabash, North Carolina, where manager Tom Roberts said he sold 150 gas cans in two hours Monday, along with generators, plywood, rope, manual can openers, sand bags and a plethora of other items.

“I’ve been doing this since 1983,” Roberts said as he completed an order for another 18-wheeler full of supplies. “This is the craziest one.”

Many newcomers have moved to the coast in the nearly 19 years since the last strong hurricane — Floyd — threatened the area. Roberts said he’s telling them to get out of town.

“I’m telling them to go inland, but I’m worried about the rain and tornadoes too,” Roberts said.

Several meteorologists said Florence could do what Hurricane Harvey did last year over Texas, dumping days of rain, although not quite as bad.

“I think this is very Harvey-esque,” said University of Miami hurricane expert Brian McNoldy. “Normally, a landfalling tropical cyclone just keeps on going inland, gradually dissipating and raining itself out. But on rare occasions, the steering patterns can line up such that a storm slips into a dead zone between troughs and ridges.”

On North Carolina’s Outer Banks, Dawn Farrow Taylor, 50, was gathering photos and important documents and filling prescriptions Monday before heading inland. She grew up on the island chain, and says this will be only the second time she’s evacuated.

“I don’t think many of us have ever been through a Category 4. And out here we’re so fragile. We’re just a strip of land — we’re a barrier island,” she said.

In announcing his evacuation order, South Carolina Gov. Henry McMaster said an estimated 1 million people would be fleeing the coast. Eastbound lanes of Interstate 26 heading into Charleston and U.S. 501 heading into Myrtle Beach will be reversed when the order takes effect.

An evacuation order from Virginia Gov. Ralph Northam applies to about 245,000 people, including parts of the Hampton Roads area and Eastern Shore.

North Carolina Gov. Roy Cooper said his state was “in the bullseye” of the storm and urged people to “get ready now.”