In a remote district, starving Yemenis live off leaves 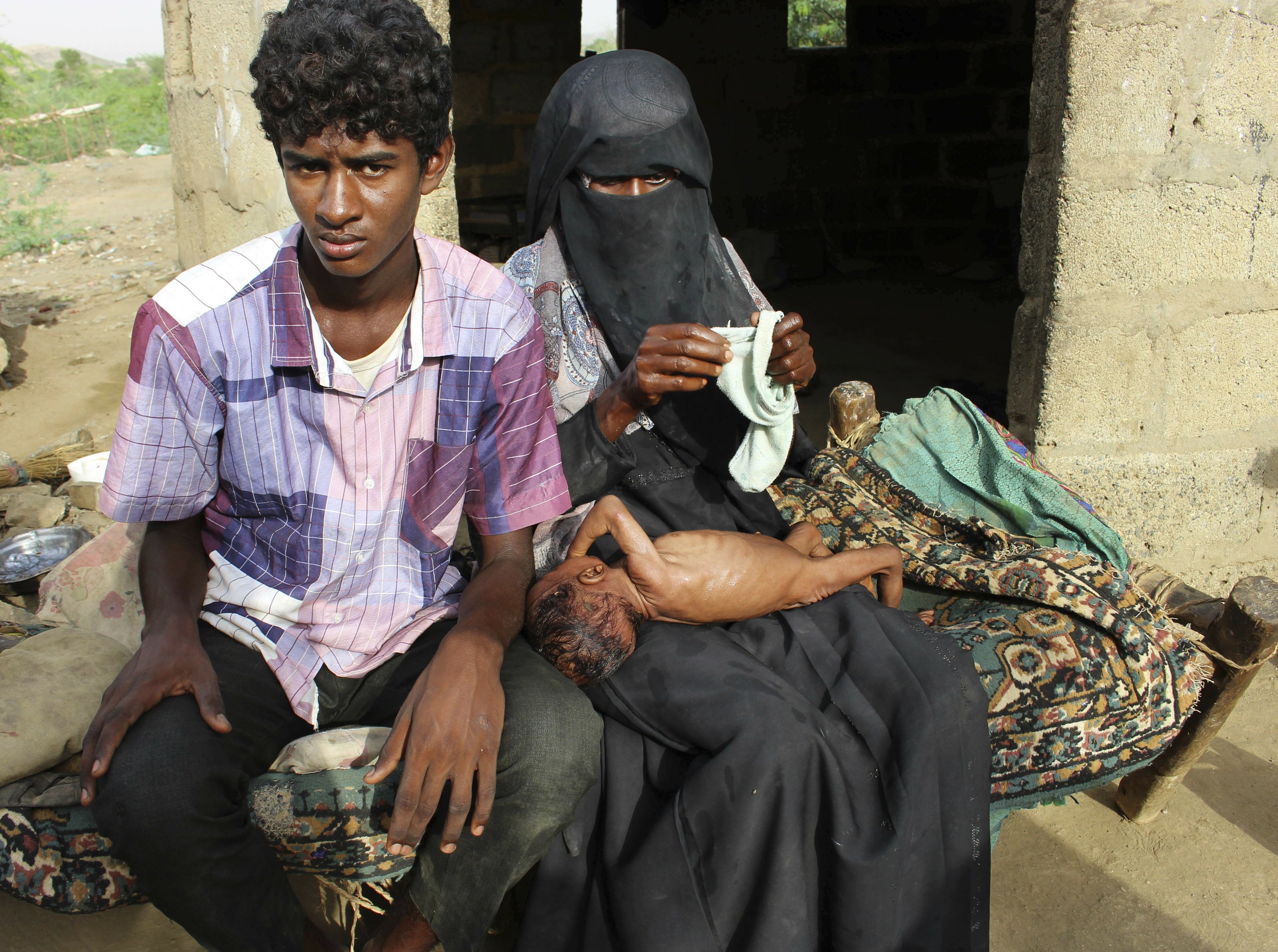 CAIRO — In a remote pocket of northern Yemen, many families with starving children have nothing to eat but the leaves of a local vine, boiled into a sour, acidic green paste. International aid agencies have been caught off guard by the extent of the suffering there as parents and children waste away.

The main health center in Aslam district was flooded with dozens of emaciated children during a recent visit by The Associated Press. Excruciatingly thin toddlers, eyes bulging, sat in a plastic washtub used in a make-shift scale as nurses weighed them one by one. Their papery skin was stretched tight over pencil-like limbs and knobby knees. Nurses measured their forearms, just a few centimeters in diameter, marking the worst stages of malnutrition.

At least 20 children are known to have died of starvation already this year, more than three years into the country’s ruinous civil war, in the province that includes the district. The real number is likely far higher, since few families report their children’s deaths when they die at home, officials say.

In one nearby village, a 7-month-old girl, Zahra, cries and reaches with her bony arms for her mother to feed her. Her mother is undernourished herself and is often unable to breastfeed Zahra. She can’t afford formula for her baby.

“Since the day she was born, I have not had the money to buy her milk or buy her medicine,” the mother said.

Zahra was recently treated at the heath center. Now at home, she’s dwindling away again. With no money, her parents can’t afford to hire a car or motorbike take her back to the clinic.

If they don’t, Zahra will die, said Mekkiya Mahdi, the health center chief.

“We are in the 21st century, but this is what the war did to us,” Mahdi said. After she tours villages and sees everyone living off the leaf paste, “I go home and I can’t put food in my mouth.”

The worsening hunger in Aslam is a sign of the gaps in an international aid system that is already overwhelmed and under pressure from local authorities. Yet outside aid is the only thing standing between Yemen’s people and widespread death from starvation. The conditions in the district may also be an indication that the warnings humanitarian officials have sounded for months are coming true: In the face of unending war, hunger’s spread is outstripping efforts to keep people alive.

When AP approached U.N. agencies with questions about the situation in Aslam, they expressed alarm and surprise. In response to the AP’s questions, international and local aid groups launched an investigation into why food wasn’t getting to the families that need it the most, a top relief official said.

As a response in the meantime, the official said, relief agencies are sending over 10,000 food baskets to the district, and UNICEF said it is increasing its mobile teams in the district from three to four and providing transportation to health facilities. The official spoke on condition of anonymity because of the sensitivity of issues involved in operating in the war-ravaged country.

In first six months of this year, Hajjah province, where Aslam is located, recorded 17,000 cases of severe acute malnutrition, higher than in any full year on record, said Walid al-Shamshan, head of the Health Ministry’s nutrition section in the province.

Malnourished children who were previously treated return to clinics in even worse condition — if they make it back at all.

Yemen’s civil war has wrecked the impoverished country’s already fragile ability to feed its population. The war pits Shiite rebels known as Houthis, who hold the north, against a Saudi-led coalition, armed and backed by the United States. The coalition has sought to bomb the rebels into submission with an air campaign in support of Yemeni government forces.

Around 2.9 million women and children are acutely malnourished; another 400,000 children are fighting for their lives only a step away from starvation.

The number of people nationwide who would starve if they didn’t receive aid grew by a quarter over the past year, now standing at 8.4 million of Yemen’s 29 million people, according to U.N. figures. That number is likely to soon jump by another 3.5 million because the currency is losing value, leaving growing numbers of people unable to afford food, the U.N. warned this month.

Aslam is one of the poorest districts in the country, with hundreds of small villages, some isolated in the high mountains in the Houthi heartland. Its population of 75,000 to 106,000 includes both local residents and accelerating numbers of displaced people who fled fighting elsewhere.

In terms of hunger, Aslam isn’t alone. Health officials say that other districts closer to war zones may not be getting food aid at all. But Aslam did see one of the province’s highest jumps in the number of reported children suffering from severe acute malnutrition: From 384 cases being treated in January, an additional 1,319 more came in over the next six months, according to local health records. That comes to around 15 percent of the district’s children.

“Aslam is just another picture of Somalia,” said Saleh al Faqih, a worker in a mobile Health Ministry clinic, comparing it to the Horn of Africa nation often hit by famines.

Aslam’s main health center has no pediatricians, no electricity, no oxygen cylinders. At night, medics use flash lights because there is no fuel for generators. Fathers beg in the nearby market for 300 riyals — around 50 U.S. cents — to buy a diaper for their child going into the center.

Before the war, the center would see one or two malnourished children a month. In August alone, it received 99 cases, nearly half of them in the most severe stages, the center’s nutrition chief Khaled Hassan said. Even after treatment, children often deteriorate once again when they go home to villages with no food and contaminated water.

There appeared to be multiple reasons why aid was not reaching some of the starving, beyond the rapid increase in those in need.

The lion’s share of assistance goes to displaced people, while only 20 percent goes to the local community, said Azma Ali, a worker with the World Food Program. Agencies’ criteria give priority for help to the displaced and households without a breadwinner, even as local residents also struggle to find food.

Under heavy pressure from Houthi authorities, international agencies like WFP and UNICEF and their Yemeni partners are required to use lists of needy provided by local officials.

Critics accuse those officials of favoritism. That especially works against the local population in Aslam, where many belong to the “Muhammasheen,” Arabic for the “Marginalized,” a community of darker-skinned Yemenis shunned by the rest of society and left to work as garbage collectors, menial laborers or beggars. The Marginalized have no weight with officials to ensure aid goes their way.

“The powerful hinder the work of the humanitarian agencies and deprive of aid those people who are in most need,” he said. He spoke on condition of anonymity for fear of problems with the authorities.

Some residents said local officials demand small bribes to get on food lists — the equivalent of around 15 U.S. cents, but still too much for many people here. U.N. agencies have insufficient capacity to oversee many distribution centers.

Food deliveries that do make it to Aslam come irregularly or are too small or are missing items, residents and aid workers said.

People in Aslam have become increasingly reliant on leaves from the local vine, known in Yemeni Arabic as “halas” or in English as Arabian Wax Leaf. It used to be eaten only occasionally but now it’s all many residents eat for every meal. Mothers spend hours picking the leaves, then washing and boiling them. Too much of it causes diarrhea. The water it’s washed in — well water often tainted with sewage — is also a constant cause of diarrhea.

In the village of al-Mashrada, Zahra’s mother feeds her whole family with halas mush. She has seven other children, including two boys with mental disorders who are kept chained inside their shack so they don’t wander away. The children’s father roams the town, looking for food.

Zahra’s mother said only “the big heads” — the better-off and well-connected — end up with international aid.

“We only have God. We are poor and we have nothing.”