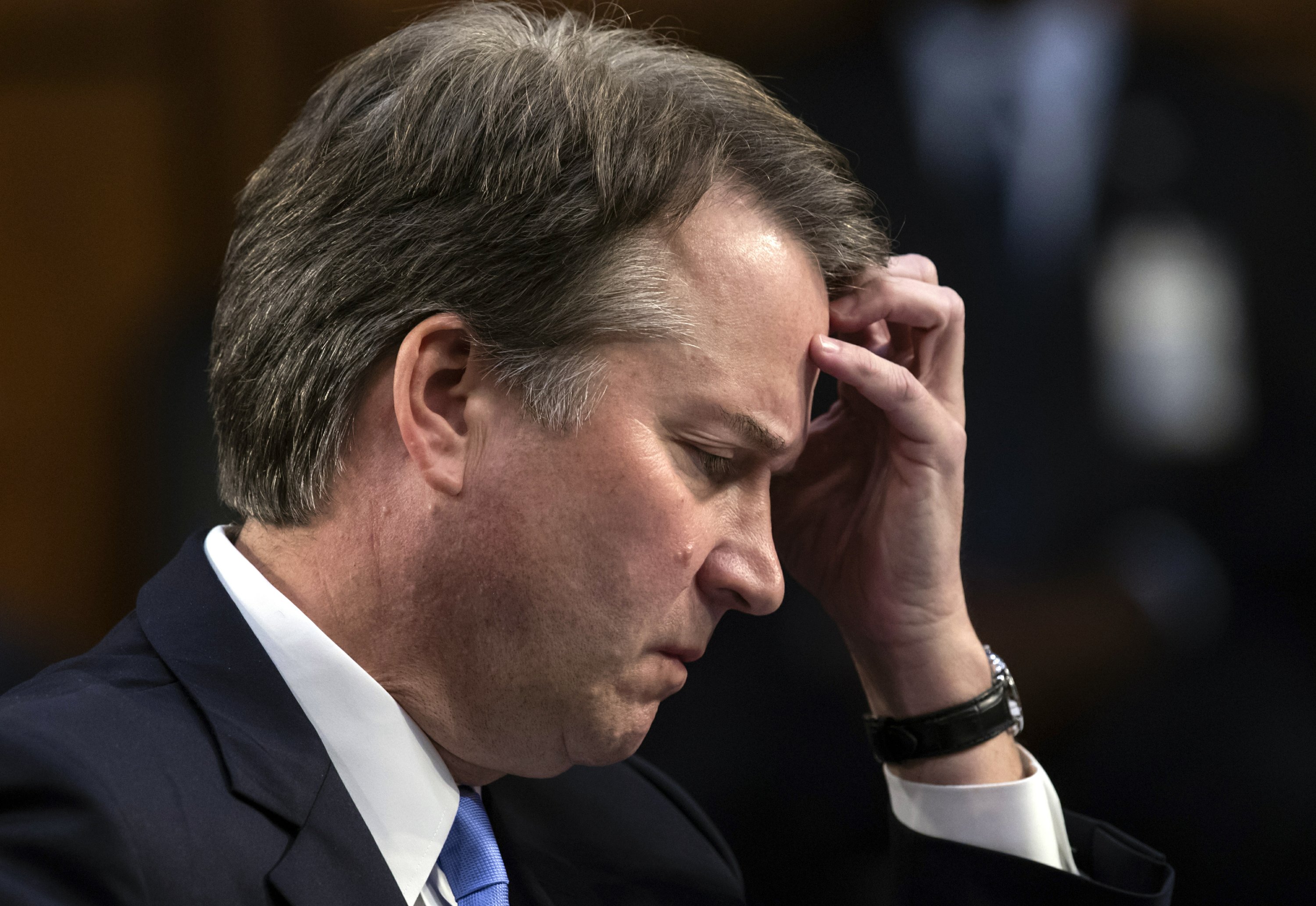 WASHINGTON — True or false, a woman’s accusation that Brett Kavanaugh sexually assaulted her in high school buckles what had been a smooth path to a seat on the Supreme Court.

Kavanaugh denies it, but the accuser came back with an offer to testify publicly to Congress. Republicans defending their House and Senate majorities are wary of a public hearing, which would play out in the crosswinds of the #MeToo movement and the Nov. 6 elections. Then there’s the man in the Oval Office, himself the subject of misconduct accusations by more than a dozen women — all liars, he has said.

Some things to know about the forces have swamped the Kavanaugh nomination:

THE STATE OF THINGS

Official Washington is scrambling Monday to assess Kavanaugh’s prospects after his accuser, Christine Blasey Ford, revealed her identity to The Washington Post and described an encounter she believes was attempted rape. Kavanaugh came to the White House amid the upheaval, but there was no immediate word on why or whether he had been summoned.

Ford sent her lawyer out to be clear on some key points. “She believes that if it were not for the severe intoxication of Brett Kavanaugh, she would have been raped,” Ford’s lawyer, Debra S. Katz, told NBC’s “Today.” Further, Ford is willing to testify publicly, under oath, Katz said.

Through the White House, Kavanaugh “categorically and unequivocally” denied the allegation and said he is willing to talk to the Senate Judiciary Committee about it.

Ford said she was reluctant to come forward until reporters began contacting her. Kavanaugh, she told the Post, pinned her to a bed at a Maryland party in the early 1980s and tried to remove her clothing and put his hand over her mouth when she tried to scream. She said was around 15 at the time. He was 17.

Kavanaugh attended a private school for boys in Maryland, while Ford attended a nearby school.

The Senate Judiciary Committee as of Monday morning had not changed its plan for a Thursday vote on whether to recommend Kavanaugh and forward his nomination to the full Senate. Critics have accused the GOP of fast-tracking the process to get Kavanaugh on the court by Oct. 1, the first day of the fall term.

Which way Kavanaugh’s nomination goes — to the high court or down in defeat — is all about the math of votes in the 100-member Senate. The party split goes like this: 51 Republicans, 47 Democrats, and 2 Independents, who both caucus with the Democrats. So two Republican votes against Kavanaugh’s confirmation would derail it. Vice President Mike Pence could break a 50-50 tie.

There are more than two Republican senators who are not committing to voting yes. Retiring Sens. Jeff Flake of Arizona, a member of the Judiciary Committee, says he is not comfortable holding a vote until Ford’s allegations are heard. Sen. Bob Corker of Tennessee, who also is retiring, is not on the panel but said the vote should be postponed until the committee has heard from Ford. Contacted Sunday by CNN, Sen. Susan Collins, R-Maine, wouldn’t say whether the vote should be postponed or whether she believes Ford.

Like Collins, Sen. Lisa Murkowski of Alaska told the network she has questions. Both Collins and Murkowski are considered potential swing votes on Kavanaugh’s nomination.

The Judiciary Committee is split between majority Republicans and Democrats 11-10. Even if Democrats peel off the one Republican vote to not recommend Kavanaugh to the full Senate, Republicans have another option. There’s nothing preventing Senate Majority Leader Mitch McConnell from bringing the nomination directly to the Senate floor.

That left open the question of whether Trump wants Republicans to hear from her in public or private. Conway said that was up to the Judiciary Committee.

Either way, Trump’s own history could be drawn into the discussion. More than a dozen women have accused him of sexual misconduct, which he denies. Then there’s the “Access Hollywood” tape that repelled many Republicans when it became public during the 2016 election. On it, Trump’s voice can be heard boasting of grabbing women by their genitals and kissing them without permission.

Conspicuously missing from the public remarks of Republicans on Monday was a vociferous defense of Kavanaugh. The restraint was clearly designed to appeal to Collins and Murkowski — or at least, to avoid angering them.

Republicans are certain to try to avoid a public airing of the allegations.

Senate Judiciary Committee Chairman Chuck Grassley of Iowa was trying to arrange separate, follow-up calls with Kavanaugh and Ford before Thursday’s vote — but just for aides to top members. Democrats rejected the idea and have called for the FBI to investigate the allegation as part of a background check.

It’s early for any polling on whether the weekend’s developments have changed anything for Republicans or for Trump.

But in an election that’s shaping up to be a referendum on Trump, the president and his party already were facing a headwind of opposition from women.