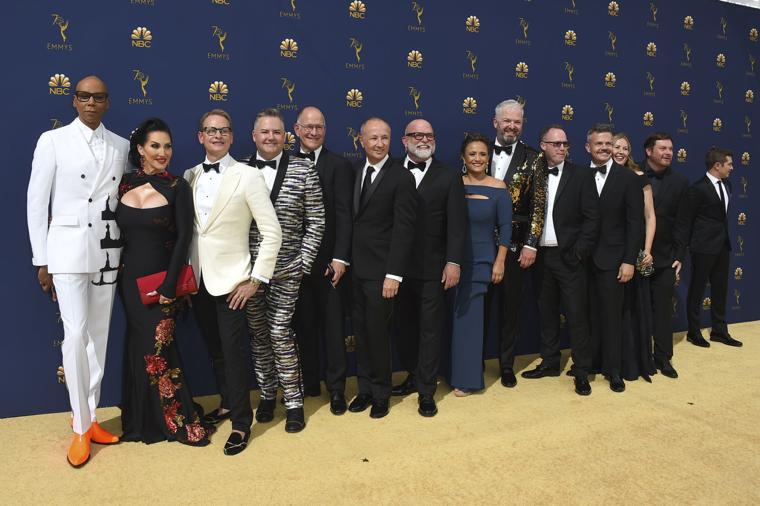 LOS ANGELES — The Latest on the 70th prime-time Emmy Awards being presented Monday at the Microsoft Theater in downtown Los Angeles (all times local):

“The Marvelous Mrs. Maisel’s” Alex Borstein is the winner of the Emmy Award for best supporting actor in a comedy series.

It’s the second 2018 Emmy for Borstein, who already won best character voice-over performance for her longtime role of Lois Griffin on “Family Guy.”

She plays Susie Myerson on Amazon’s “The Marvelous Mrs. Maisel.”

Henry Winkler is the winner of the Emmy Award for best supporting actor in a comedy series.

It’s the first Emmy in a 40-year television career for Winkler. He was nominated three times in the 1970s for playing Arthur “Fonzie” Fonzarelli on “Happy Days,” a character that spawned a cultural craze and made him one of the biggest stars on TV.

The 72-year-old Winkler has played mostly small comic roles in movies and TV since.

Winkler got a standing ovation for his win.

He started his speech by saying, “I wrote this 43 years ago.”

He ended it by telling his adult children to go to bed.
___

The Emmys have started with a song whose chorus was “We Solved It,” a comic ode to the diversity of nominees — and Hollywood self-satisfaction.

The comedians sang: “There were none, now there’s one, so we’re done.”

They were joined by Tituss Burgess, Kristen Bell, Sterling K. Brown and Ricky Martin, who declared the song “too white” and gave it a Latin turn.

Andy Samberg showed up to ask in song if there was a place for a straight white male in the song before being sent off. Martin and Samberg were met with loud cheers inside Microsoft Theater.

The group gave way to the night’s hosts Michael Che and Colin Jost, who continued to riff on Hollywood diversity and the sexual misconduct scandal that has roiled the industry.

The host of “Last Week Tonight With John Oliver” was feeling empathy on the gold carpet for this year’s Emmys hosts Michael Che and Colin Jost from “Saturday Night Live.”

Che and Jost, in their black tuxedos, were among the first to walk down the carpet before the show on Monday afternoon.

Oliver says the audience is tense and as the night goes on the crowd becomes increasingly resentful since most of them don’t win.

He says it’s not easy to do comedy in those conditions.

“This Is Us” stars Mandy Moore and Milo Ventimiglia aren’t walking the golden carpet together at the Emmys, but bumped into each other in the long line for photos.

The two actors, who are married on the show, met in the middle Monday to pose for some pics and even took a few selfies with fans walking by.

Elsewhere, another “This Is Us” co-star, Sterling K. Brown, says he loves the regular-guy role he plays on the NBC hit series.

Brown, nominated for lead actor in a drama, an award he won last year, says it’s nice going to work every day playing a character who “didn’t kill people, he’s not secrets and lies. He’s trying to find the best part of himself to share with humanity.”

The biggest gathering of stars on the Emmys gold carpet is a bottleneck of celebs waiting patiently in a long line for the photo call.

RuPaul, fan in hand, leaned over a rope and stanchion to hug Margo Martindale of “The Americans.”

Heidi Klum fixed her hair before stepping out for the cameras and Issa Rae of “Insecure” looked up from her phone to wave to LaKeith Stanfield of “Atlanta.”

Elsewhere on the carpet, “Insecure” actress Yvonne Orji and “This is Us” actor Justin Hartley posed for selfies with fans.

George R.R. Martin, author of the books behind “Game of Thrones,” got cheers from the fan bleachers. One person yelled, “Finish the book!” to laughs, referring “The Winds of Winter,” the very-long-awaited next volume in the series.

The 61-year-old actress said Monday that she wants “to speak to the millennials today to let them know they are not alone when they speak out.”

She wore a red-and-black sweat shirt emblazoned with Nike, which began using the former San Francisco 49ers quarterback in an ad campaign earlier this month.

The athletic company’s trademark swoosh was done in crystals. She accented her black leggings and black-and-white pattern boots with a diamond bracelet and ring.

Lewis says, “We are not living in dark times. We are living in awakening times, and I am proud to be one of the leaders in the movement.”

Politics are top of mind on the golden carpet for many of the stars attending the Emmy Awards Monday.

And actress Q’orianka Kilcher accessorized her red dress with a pin that reads “I am a voter.”

“The Alienist” actress says she felt it was important to send the message that “all of our voices matter and all of our votes matter.”

Margo Martindale took a different stance, however, saying that awards shows lately have backed off from being as political.

Martindale says, “I think it’s fine to be political, don’t get me wrong. But middle America is hard to reach.”

The sprawling golden carpet for the 70th annual Emmy Awards is heating up as security readies for the deluge of television stars headed for the Microsoft Theater Monday afternoon.

NBC’s Natalie Morales and Hoda Kotb were among the very early arrivals, making their way down the carpet before the inevitable traffic jam of bodies. Extra host Mario Lopez, who has a foot injury, zipped down the carpet on a tiny scooter keeping his left leg off the ground.

Although the temperatures in downtown Los Angeles are in the 80s, arriving attendees will not have to bear the brunt of the heat. The carpet area is covered by a massive tent and an army of industrial-size ceiling fans.

— Lindsey Bahr (@ldbahr on Twitter) on the Emmys red carpet

As Emmy Award nominees nervously wait to hear their name called, or not, there’s more on the line at Monday’s ceremony than personal glory.

“The Handmaid’s Tale” is the defending best drama series champ, with past winner “Game of Thrones” its top rival.

On the comedy side, the front-runners are FX’s “Atlanta” and Amazon Prime Video’s “The Marvelous Mrs. Maisel.”