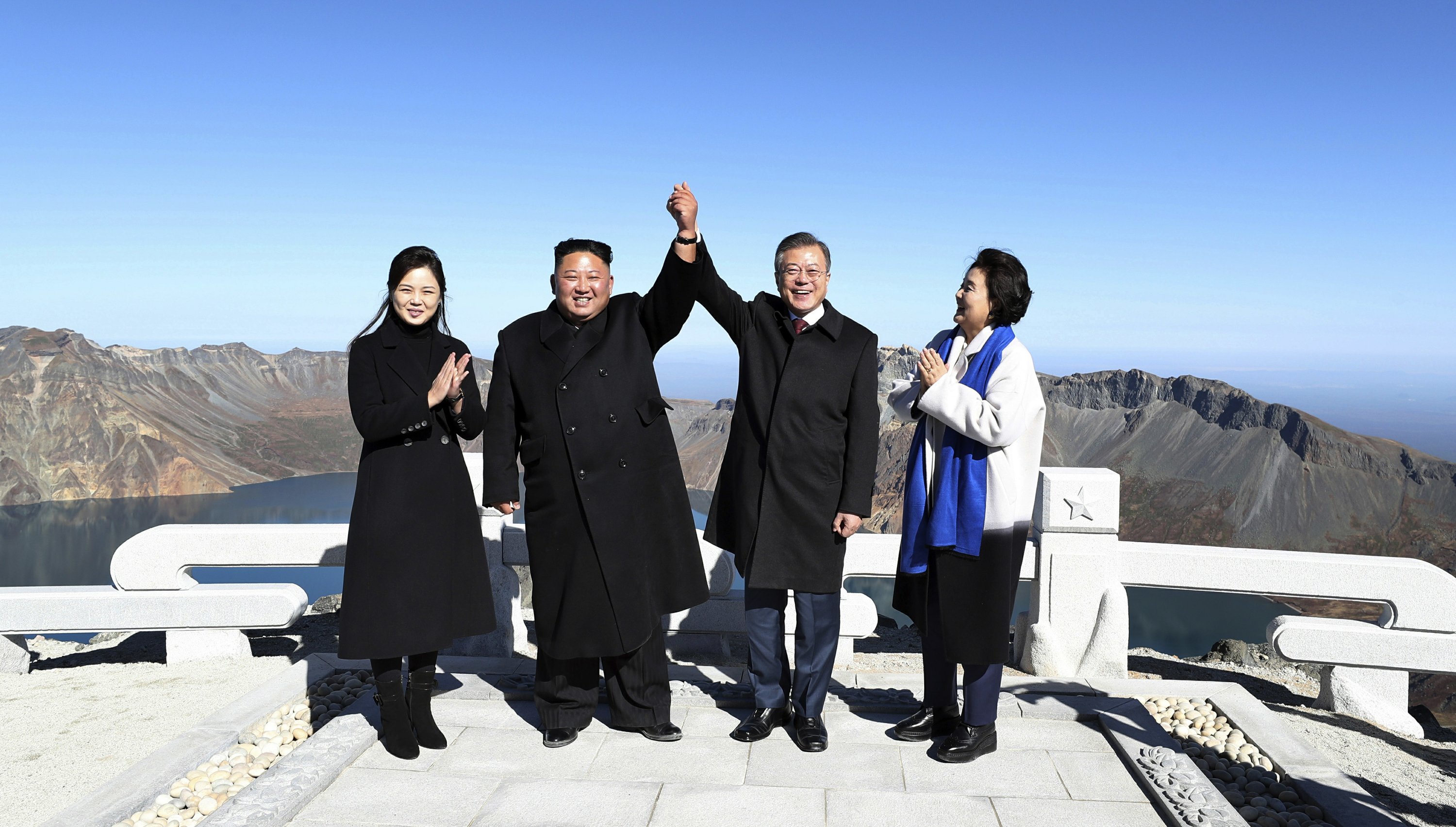 PYONGYANG, North Korea — The leaders of the rival Koreas took to the road for the final day of their summit Thursday, standing on the peak of a beautiful volcano considered sacred in the North and a centerpiece of propaganda used to legitimize the Kim family’s rule, their hands clasped and raised in a pose of triumph. Their trip to the mountain on the North Korean-Chinese border, and the striking photo-op that will resonate in both Koreas, followed a day of wide-ranging agreements they trumpeted as a major step toward peace.

However, their premier accord on the issue that most worries the world — the North’s pursuit of nuclear-tipped missiles that can accurately strike the U.S. mainland — contained a big condition: Kim Jong Un stated that he would permanently dismantle North Korea’s main nuclear facility only if the United States takes unspecified corresponding measures.

Kim and South Korean President Moon Jae-in flew separately to an airport near Mount Paektu on Thursday morning where they then met up and drove to the mountain.

Photos showed the leaders smiling broadly as they posed at the summit, their wives grinning at their sides, a brilliant blue sky and the deep crater lake that tops the volcano in the background; they also toured the shores of the lake. Members of the Kim family are referred to as sharing the “Paektu Bloodline,” and the volcano is emblazoned on the national emblem and lends its name to everything from rockets to power stations.

South Korean Defence Minister Song Young-moo and North Korea’s Minister of the People’s Armed Forces No Kwang Chol signed an agreement that Seoul says is about reducing military tensions along the border. (Sept. 19)

Many South Koreans also feel drawn to the volcano, which, according to Korean mythology, was the birthplace of Dangun, the founder of the first ancient Korean kingdom, and has long been considered one of the most beautiful places on the peninsula. Not everyone was pleased, though. About 100 anti-North Korea protesters rallied in central Seoul to express anger about the summit and displayed slogans that read, “No to SK-NK summit that benefit(s) Kim Jong Un.”

Moon departed for South Korea later Thursday, as the leaders bask in the glow of the joint statement they settled Wednesday. Compared to the vague language of their two earlier summits, Kim and Moon seem to have agreed on an ambitious program meant to tackle soaring tensions last year that had many fearing war as the North tested a string of increasingly powerful weapons.

Kim promised to accept international inspectors to monitor the closing of a key missile test site and launch pad and to visit Seoul soon, and both leaders vowed to work together to try to host the Summer Olympics in 2032.

But while containing several tantalizing offers, their joint statement appeared to fall short of the major steps many in Washington have been looking for — such as a commitment by Kim to provide a list of North Korea’s nuclear facilities, a solid step-by-step timeline for closing them down, or an agreement to allow international inspectors to assess progress or discover violations.

It also was unclear what “corresponding steps” North Korea wants from the U.S. to dismantle its nuclear site.

The question is whether it will be enough for President Donald Trump to pick up where Moon has left off. Trump told reporters Wednesday that the outcome of the summit was “very good news” and that “we’re making tremendous progress” with North Korea. He didn’t indicate in his brief remarks whether the U.S. would be willing to take further steps to encourage North Korean action on denuclearization.

Declaring they had made a major step toward peace, Moon and Kim stood side by side Wednesday as they announced their agreement.

“We have agreed to make the Korean Peninsula a land of peace that is free from nuclear weapons and nuclear threat,” Kim said. “The road to our future will not always be smooth and we may face challenges and trials we can’t anticipate. But we aren’t afraid of headwinds because our strength will grow as we overcome each trial based on the strength of our nation.”

Moon urged unity for all Koreans in a speech he gave Wednesday night to the crowd gathered for North Korea’s signature mass games. “We have lived together for 5,000 years and lived in separation for 70 years. I now propose that we completely eliminate the hostility of the past 70 years and take a big step forward in peace so that we can become one again.”

Historians say the 5,000-year timeline of Korean history is a groundless claim that became part of South Korea’s official narrative after being inserted in school textbooks during the rule of former dictator Chun Doo-hwan.

This week’s summit comes as Moon is under increasing pressure from Washington to find a path forward in efforts to get Kim to completely — and unilaterally — abandon his nuclear arsenal.

Trump has maintained that he and Kim have a solid relationship, and both leaders have expressed interest in a follow-up summit to their meeting in June in Singapore. North Korea has been demanding a declaration formally ending the Korean War, which was stopped in 1953 by a cease-fire, but neither leader mentioned it Wednesday as they read the joint statement.

In the meantime, however, Moon and Kim made concrete moves of their own to reduce tensions on their border.

According to a statement signed by the countries’ defense chiefs, the two Koreas agreed to establish buffer zones along their land and sea borders to reduce military tensions and prevent accidental clashes. They also agreed to withdraw 11 guard posts from the Demilitarized Zone by December and to establish a no-fly zone above the military demarcation line that bisects the two Koreas that will apply to planes, helicopters and drones.

Other agreements aimed at removing some longstanding irritants from their relations, such as allowing more contact between families divided by the Korean War. Moon also appeared to be making good on his proposals to help build up the North’s infrastructure and open cross-border rail links.