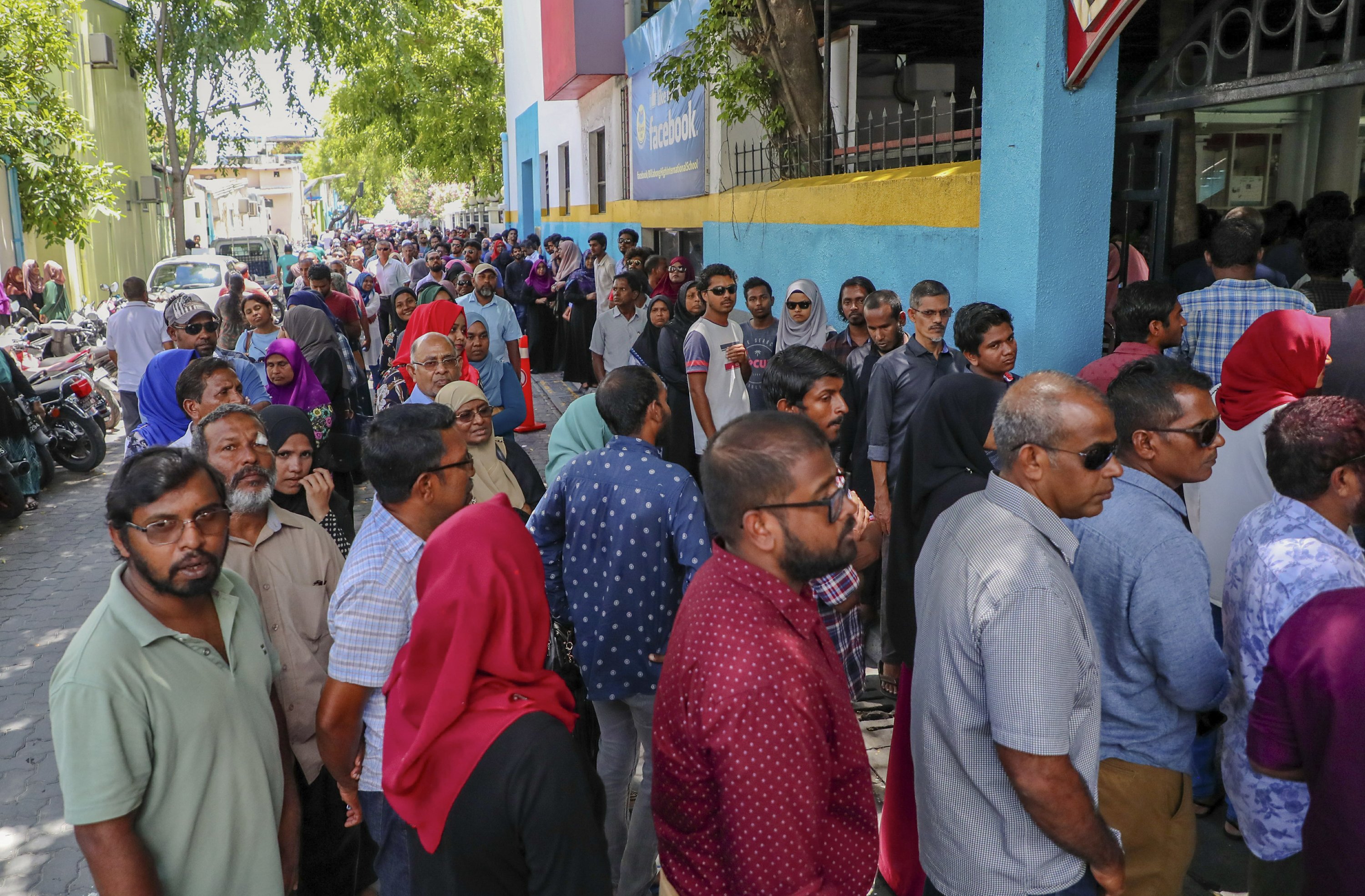 MALE, Maldives — The Latest on the Maldives’ presidential election (all times local):

Independent newspaper website mihaaru.com reports that Solih has 58.3 percent of the vote, with nearly 92 percent of ballots counted.

The opposition had feared the election would be rigged in favor of Maldives’ strongman President Yameen Abdul Gayoom, whose first term in office was marked by a crackdown on political rivals, courts and the media.

In a victory speech in Maldives’ capital Male, Solih called it “a moment of happiness, hope and history.”

Election officials in the Maldives say voting has ended in the South Asian island nation’s third-ever multiparty presidential election after the polls were kept open longer than planned due to high voter turnout.

More than 260,000 of the 400,000 citizens of the Maldives were eligible to vote at about 400 polling stations across the islands that comprise the Indian Ocean archipelago.

An elections-eve raid of the opposition presidential candidate’s main campaign office cast a pall over Sunday’s election, widely seen as a referendum on the Maldives’ young democracy. But it did not appear to deter voters, who waited in rain and high temperatures to cast ballots.

Authorities in the Maldives say voting hours have been extended to accommodate high voter turnout in the country’s presidential election.

Election commission spokesman Ahmed Akram says the polls, which were originally scheduled to close at 4 p.m., will remain open until 7 p.m. He says that by midday Sunday, voter turnout was about 42 percent and that turnout may rise to as much as 90 percent by the time the polls close.

More than 260,000 of the 400,000 citizens of the Maldives were eligible to vote at about 400 polling stations across the islands that comprise the Indian Ocean archipelago.

Party officials say no arrests have been made Sunday after an elections-eve raid of the presidential opposition candidate’s main campaign office in Male.

A warrant for the raid obtained by The Associated Press cited police intelligence of possible vote-buying at the campaign office. The presidential candidate, Ibrahim Mohamed Solih, was not in the office during the hours-long raid.

The raid has cast a pall over Sunday’s elections, widely seen as a referendum on the island nation’s young democracy.

The opposition says it bolsters fears that the vote will be rigged in favor of the Maldives’ strongman President Yameen Abdul Gayoom.

Both Yameen and Solih voted in Male shortly after polls opened Sunday morning.

The polls close at 4 p.m. and election officials say results are expected after 10 p.m.

Voting has started in the Maldives in a presidential election that is widely seen as a referendum on the island nation’s young democracy.

Gayoom has been criticized for cracking down on freedoms. He used his first term to consolidate power, jailing opponents, including his half brother, a former president, and two Supreme Court Justices, or forcing them into exile and asserting control over the courts.

Members of the opposition decried the raid, saying the election could be rigged in favor of Gayoom.