Is a hunt the answer when bears start getting bolder? 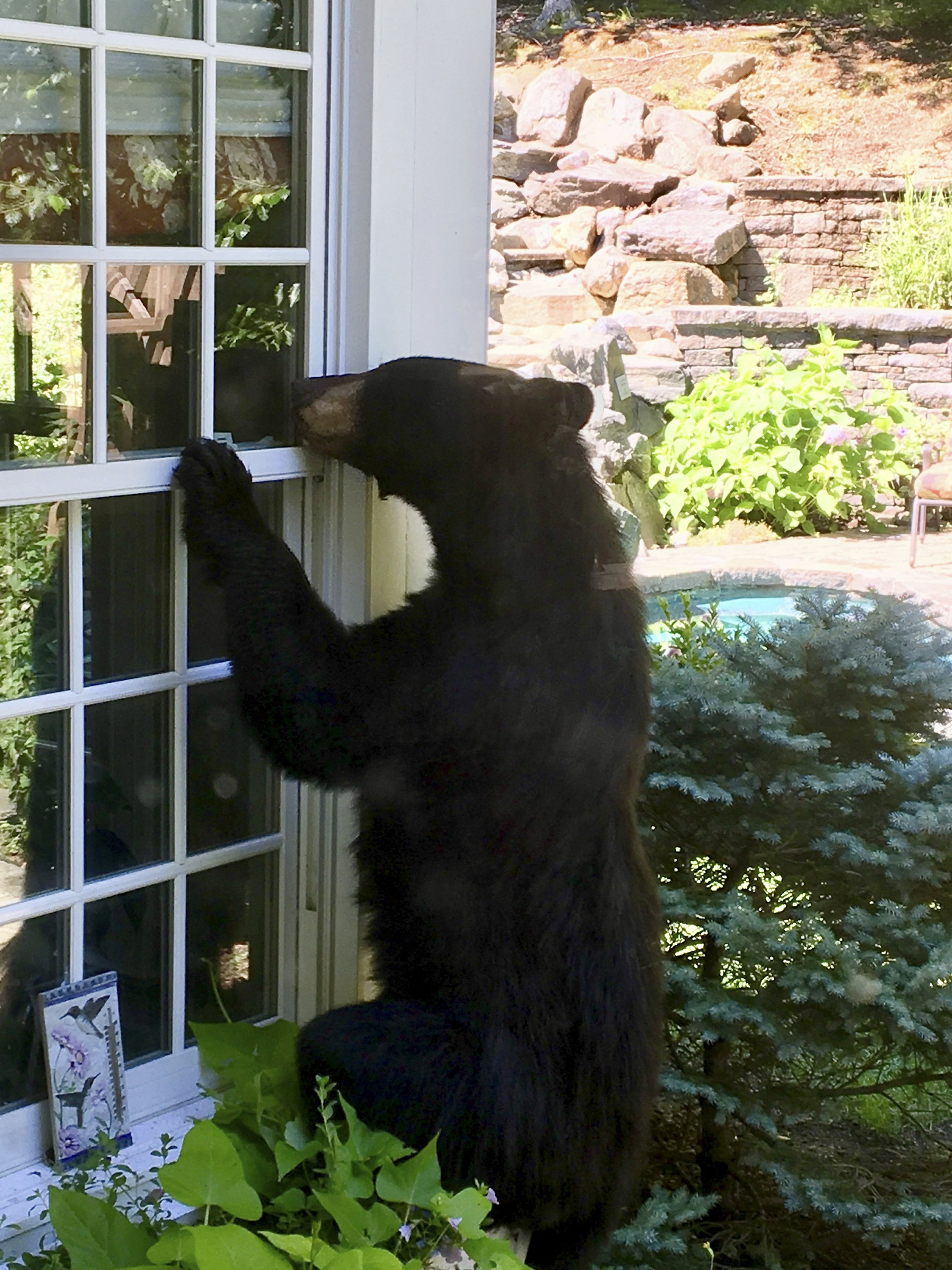 CANTON, Conn. — Tom Bradley had grown accustomed to seeing black bears walk through his Connecticut neighborhood, but this month he was alarmed to find something trying to turn a doorknob to enter his house.

He used his key fob to set off his car horn, to scare away whatever was in his garage. When he went outside, he saw a bear and two cubs that had been trying to get into his mudroom.

“I think what is happening is, the bears are learning,” Bradley said. “It was sort of a step from going outside to get the garbage, to going into the garage where the cans are, and now they are moving into the homes because they have discovered that is where the food is.”

Bears have been encroaching on humans in record numbers this year in Connecticut, which has seen increases in the black bear population like other nearby states and is the only that one does not allow bear hunting.

There have been 24 reports of bears breaking into homes and businesses in Connecticut this year, well above the yearly average of about six, said Paul Rego, a state wildlife biologist.

In recent months, bears have shredded a car’s interior, wandered into a liquor store, even woken residents in their own bedrooms.

“We have many cases where bears have become very comfortable living close to humans and not being impressed by barking dogs and yelling people,” Rego said.

Bear encounters are up in other states, as well. New York has received 1,282 nuisance bear reports this year, such as the animals getting into garbage or bird feeders, compared with 700 a year ago, the state Department of Environmental Conservation. Officials believe drought conditions earlier this summer, which led to fewer berries, may be a factor.

But drought wasn’t an issue in Connecticut, Rego said. A study last year by the University of Connecticut showed the bears are actually choosing to make their homes near people.

As the bear population grows, the animals are finding perfect living conditions in exurban areas, where there are plenty of woods but also homes every acre or two, providing access to easy food sources, said Tracy Rittenhouse, an assistant professor of wildlife ecology at UConn.

Bears stop by the Steve and Julie Sonlin’s home in Avon several times a year and have looked into the windows, grabbed a bag of birdseed from the garage, even taken a dip in their hot tub.

When alerted to bears encroaching on homes, the Connecticut environmental department tries to dissuade the animals it captures from coming back by “hazing” them, shooting them with rubber bullets, bean bags or paint balls, and exposing them to loud noises, Rego said.

But, he said, bears are most often rewarded for living near people and seldom face a negative consequence. He would like Connecticut to open a hunting season on bears.

Recent legislation to introduce a bear hunt has failed in the Legislature, with opposition from animal rights groups.

Maine has the largest black bear population on the East Coast at about 36,000 animals, but the number of nuisance bear complaints in the state has held about steady, averaging about 500 per year. The Maine Department of Inland Fisheries and Wildlife said the number of complaints usually correlates to the abundance of natural foods, such as nuts and berries.

The state uses a popular fall hunting season to try to control the growth of the population. But Bob Humphrey, a wildlife biologist and hunter in the state, said it might be time to consider adding a spring hunt, because the bear population just keeps growing.

In Connecticut, Rego and others fear that eventually there will be attacks on humans.

Bradley said he has already witnessed some close calls, such as recently when a mother bear found herself and her cubs between a neighbor’s yard with a barking dog and another with a child playing in it. He alerted the child’s mother, he said, and she took her child back inside the house.

“It’s scary,” he said. “Sooner or later, some child, some elderly person, some dog is going to walk out between a bear and her cub and it’s going to be a disaster.”